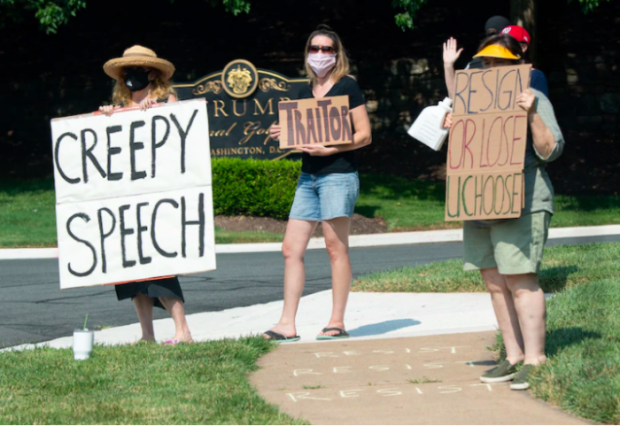 Known as cancel culture, this reckoning is defined by the targeting of people or institutions accused of enabling or endorsing racism, sexism, inequality and various forms of bigotry. Targeting often takes the form of public shaming, and sometimes leads to individuals losing their jobs and companies making significant commitments to social justice movements.

Cancelling has been endorsed in some instances by members of all political ideologies, but has become most prominent in some corners of the political left. Activists call for the toppling of controversial monuments, shaming of alleged racists and massive boycotting of companies and industries accused of complicity in purported structural inequality. Many right-rated voices have used the moment to defend diversity of thought and the right to disagree. Some frame cancel culture as an attack on traditional values, not a social justice awakening.

Other voices on both sides dismiss cultural cancellations as feigned progress, instead calling for a focus on concrete legislative action and unity in searching for a solution to issues of alleged oppression, racism and inequality. Some note a difference between holding people professionally accountable for upholding bigoted policies, and demanding retribution via social media for a slight whiff of an "impure" perspective.

Other big news this week: Jeffrey Epstein's accomplice Ghislaine Maxwell was arrested by the FBI; The Supreme Court issued several major rulings, including one against "faithless electors", and another that determined employers aren't obligated to provide free birth control; International students must switch schools or leave the U.S. if their college moves fall classes completely online; President Trump's July 4th speech was framed as unifying by some media outlets, and divisive by others; his decision to appear at Mount Rushmore also incited debate.; the U.S. economy added 4.8 million jobs last month; and the White House disclosed which companies applied for and received Paycheck Protection Program (PPP) loans.

On the Blog: How should we handle controversial statues in public areas? Allow us to introduce AllStances — a new type of AllSides content providing nuance and context on the many sides of this and other national debates; and your opinion on whether protesting is a mechanism for spreading the coronavirus may depend on your political bias.

"The letter’s signatories declared, “The forces of illiberalism are gaining strength throughout the world and have a powerful ally in Donald Trump, who represents a real threat to democracy,” but warned that the opposition shouldn’t fall into the trap of intolerance and rigid dogma. Some of the signatories were criticized for hypocrisy...Critics also took issue with what they perceived to be the prioritizing of free speech over life-and-death matters such as the novel coronavirus pandemic and police brutality."

The problem with the 'Hamilton' movie

"In the context of a movement that has clearly identified systemic racism and lethal policing for abolishing rather than reforming, "Hamilton": is quaint and noncommittal. HamilFilm has arrived at a moment when America is not satisfied with ambivalence or compromise, but yearning for real and necessary change."

“This idea of purity and you’re never compromised and you’re always politically ‘woke’ and all that stuff,” Mr. Obama said. “You should get over that quickly.” “The world is messy; there are ambiguities,” he continued. “People who do really good stuff have flaws."

“I do get a sense sometimes now among certain young people, and this is accelerated by social media, there is this sense sometimes of: ‘The way of me making change is to be as judgmental as possible about other people,’” he said, “and that’s enough." "That’s not activism. That’s not bringing about change,” he said. “If all you’re doing is casting stones, you’re probably not going to get that far. That’s easy to do.”

"The free exchange of information and ideas, the lifeblood of a liberal society, is daily becoming more constricted," suggests the letter. It also says: "We uphold the value of robust and even caustic counter-speech from all quarters. But it is now all too common to hear calls for swift and severe retribution in response to perceived transgressions of speech and thought."

"In the eyes of Trump’s Democratic critics, the president is leaning on divisive cultural issues both to energize the politics of white resentment and shift the nation’s attention away from the fast-moving spread of COVID-19 across the country. And a number of Republicans are voicing similar concerns, privately pressing their White House ally to drop the talk of race and focus on his policy agenda for a second term."

"President Trump is signaling that a focus on racial and cultural divides will be a key theme of his re-election campaign. But with the nation in the midst of a racial justice movement and polls showing a growing portion of the population supportive of change, some Republicans fear his strategy won’t work."

Free Speech is a Value, not a Right

"Free speech is a value, not a right. Understanding this distinction sheds light on the various debates in the culture war—who social media platforms should ban, the role of the First Amendment, and cancel culture. It’s true that companies like Twitter and Facebook have the moral right to allow whoever they like on their platforms. In that sense, customers do not have some immutable right to say whatever they please, but instead must conform to the companies’ rules or risk banishment...In general, it is the owner of the property who decides what is and is not acceptable speech there."

Cowardice Will Not Lead America

"Our country’s enemies may have television airwaves, faculty lounges, corporate boardrooms, and human resources offices that decide what opinions you may hold allowing you to still keep your job...But we have America. We have the spirit handed down to us by a group of patriots who — 244 years ago — gathered and risked their lives and everything they held dear to stand up for what they knew their people deserved: a country of their own, conceived in liberty and destined for unmatched greatness."

Cancel Culture Is Out of Control

"...Rowling is the rare person popular enough to be able to resist the mob. Her publisher spoke up for her, saying, "Freedom of speech is the cornerstone of publishing."

"And the University of Chicago stood up to the mob, too. The school, after a 10-day investigation, announced there was "no basis" for taking away Harold Uhlig's job. He's been reinstated. That's how these cases should be handled. "The solution is to challenge these people," says Soave. "We just have to speak up." Those of us who can, must."