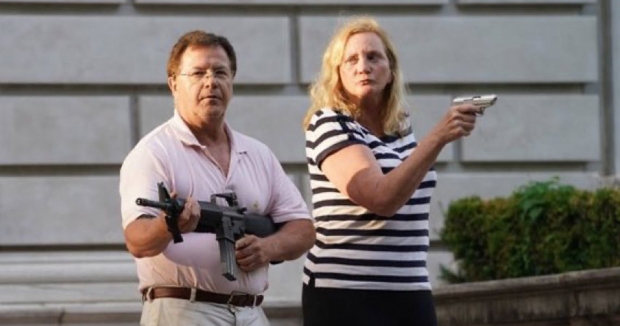 Media bias occurred over the weekend after a viral video showed a St. Louis couple displaying guns in front of their house on Sunday and telling Black Lives Matter protesters to leave their private street. Protesters had entered a gate to march toward the mayor’s house to hold a demonstration demanding her resignation.

Coverage from media outlets AllSides rates as being on the right were more likely to include the couple’s claims that protesters forcibly entered a gate and threatened them, and that the protesters were trespassing on private property; reports from media outlets on the left were more likely to describe the protesters as peaceful, note that the couple was white, and note that demonstrators can be heard in the videos telling other protesters to keep moving along to the mayor’s house.

Instead of simply giving you the observable facts, letting you decide for yourself what you think, and letting legal authorities investigate what really occurred, coverage from many media outlets featured subjective interpretations, as evidenced by the use of slant, a type of media bias, in headlines. Many media outlets, mostly on the left, labeled the protesters as “peaceful,” which is up for debate: 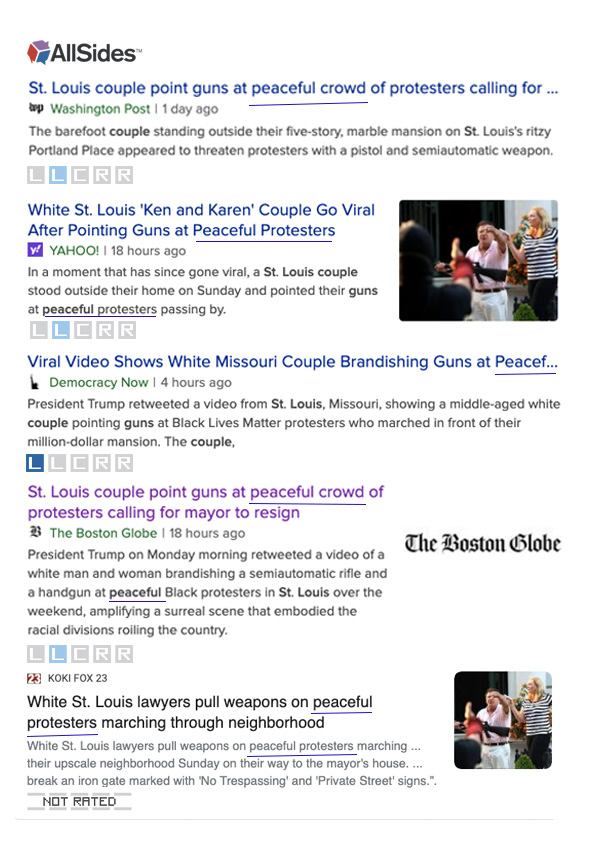 Whether or not the crowd was “peaceful” is currently being investigated by authorities, as we’ll explain below. Slant is when a media outlet only tells part of the story. Here, by designating the protesters as “peaceful,” the media are giving a one-sided view, omitting allegations that protesters were trespassing, and that some were armed and verbally threatening the couple.

Other Media Outlets Focus on Trespassing 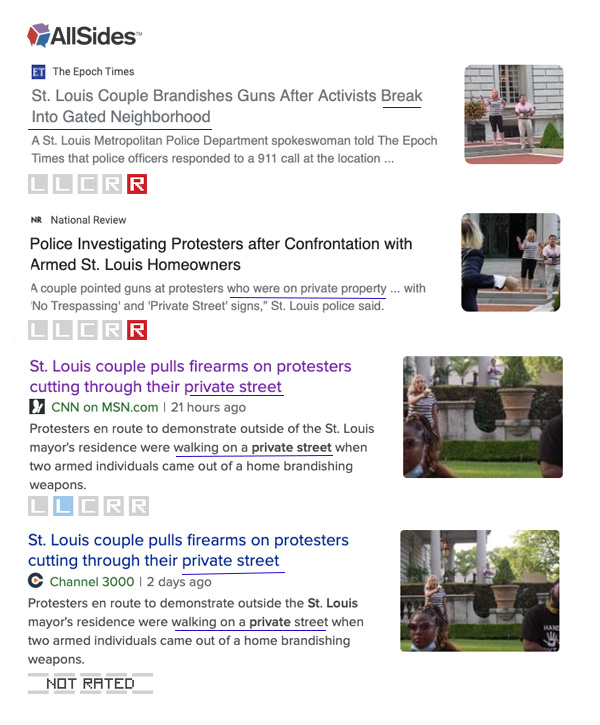 The differences among the two sets of headlines above not only shows slant, but also how media bias by placement works. Some editors wanted you to focus on their interpretation that protesters were peaceful; others, that the group had likely trespassed on private property.

The Incident: What We Know

In a Facebook livestream video of the incident, protesters can be seen walking from a public street, entering the gated street, and then encountering the homeowner, Mark McCloskey, who appears in front of his house armed. McCloskey can be heard repeatedly saying, “Get out! Private property! Read the sign.” The protesters stop and some respond with a chant, “Whose streets? Our streets!” Others can be heard saying, “Then call the f****** cops, you idiot!” “It’s a public street, a******.”

Patricia McCloskey, Mark’s spouse, soon comes out of the home pointing a gun in the direction of the protesters. A nearly 10-minute verbal altercation then occurs, with protesters yelling at the homeowners and the homeowners brandishing their guns. Some protesters can be heard saying, “We’re gonna move, calm down. We’re gonna move.” Others insult the woman: “You a racist, you a coward, b****!”

The gate was reportedly marked with a sign designating the street is private and off limits to the public. Local outlet KMOV4 reported that according to the Central West End Neighborhood Security Initiative, anyone walking there who does not live there nor is visiting someone is trespassing.

The couple had reportedly called the St. Louis Police Department and told officers they heard a "commotion" and then “observed a large group of subjects forcefully break an iron gate marked with ‘No Trespassing’ and ‘Private Street' signs,” according to an incident summary the department reportedly provided to Fox News.

Yet as Fox News also noted, the livestream of the incident, beginning around 27:00, shows the first few protesters entering a gate that appears undamaged. A separate photo shows the gate damaged, so it remains unclear when the destruction occurred and by whom.

The couple told police that they didn’t grab their guns until they noticed some of the protesters were armed, which upon review by AllSides, can't be confirmed from the livestream video. They also said the protesters threatened to kill them, burn their home and kill their dog, which also couldn't be heard among the yelling. One protester can be heard saying, “We coming back, baby...your house is next on the list.”

Police are investigating whether protesters trespassed and committed fourth-degree assault by intimidation. Some legal scholars debated whether or not the McCloskeys were within their rights to display guns.

It is the job of the reporter to give the facts, and let the audience make judgement calls for themselves. “Peaceful” is a subjective judgement, and is not up to reporters to decide. Reporters should tell you what occurred, what the allegations are, and avoid inserting their own perceptions.

As a general rule, if you can make an argument for the other side, it’s subjective and should be treated as such. Some may argue the protesters were indeed peaceful because no one was physically harmed, the McCloskey’s house was not harmed, and trespassing is a nonviolent act.

Others would argue “peaceful” isn’t an appropriate qualifier, or is at least premature, as trespassing is not a peaceful act — especially trespassing by a very large group — but rather, one of intimidation and aggression, and protesters are accused of damaging property on site and making threats.

Bias appeared on all sides of this story, with at least two right-rated outlets, The Epoch Times and Media Research Center, appearing to report that protesters broke the gate as though it were fact, despite it being under investigation. The Epoch Times writes the couple "wielded firearms after a group of activists broke through a gate to enter the private neighborhood." It may have been more accurate to say activists "allegedly" broke it; on the other hand, some may interpret "broke through" as not meaning literally broke/damaged the gate, but to mean "passed through."

The McCloskeys released a statement making a distinction between peaceful and not-peaceful members of the group. They stated, "the peaceful protesters were not the subject of scorn or disdain by the McCloskeys. To the contrary, they were expecting and supportive of the message of the protesters. The actions of violence, destruction of property and acts of threatening aggression by a few individuals commingling with the peaceful protesters, gave rise to trepidation and fear of imminent and grave harm.”

The McCloskey’s specific claims about how the protest and altercation went down may or may not be true. Regardless, the media should not eradicate nuance by painting a broad brush, nor should they form kangaroo courts and prematurely decide who is innocent or guilty before the legal system can run its course. As reporters continue to use the phrase “peaceful protesters” in describing controversial current events, as I have written about on this blog before, it’s a reminder to look into allegations on both sides, and wait to get all the facts before making judgement calls.

This blog was reviewed by AllSides Managing Editor Henry A. Brechter, who has a Center bias, and Samantha Shireman, Information Architect, who has a Lean Left bias.