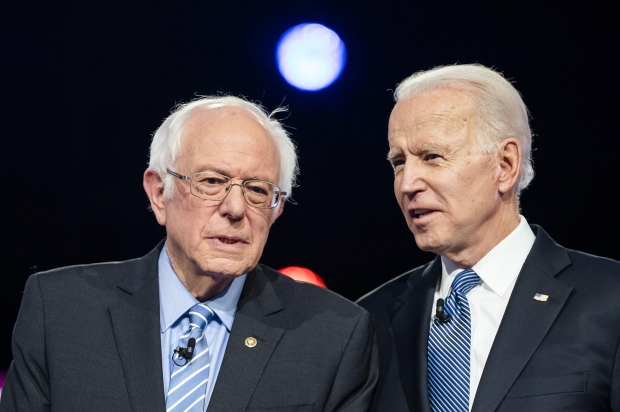 COVID-19 is disrupting almost everything about life as we know it. We at AllSides, along with many of our partner organizations, want to do our part in helping you get through it by providing the latest data, balanced news, information on staying healthy and more.

The announcement ended a once-promising campaign for Sanders, who was thoroughly outdone by Biden in most recent primary elections.

Biden is now virtually guaranteed to be the Democratic nominee, which has been the focus of most media coverage. Other reports have concentrated on the impact of Sanders' progressive stances, both on the race and the Democratic party as a whole.

Other stories this week from AllSides: British Prime Minister Boris Johnson remains in intensive care with the coronavirus; the Navy Secretary resigned amid controversy after an aircraft carrier commander captain was ousted for violating protocol to raise coronavirus concerns; and in-person voting for Wisconsin's primary elections was held as scheduled on Tuesday, following heated debate in another example ofhow coronavirus is shaking up the 2020 elections.

"The rationale for Sanders’s 2020 campaign — that he could secure massive turnout among young people and the pan-ethnic working class by pitching a quasi-revolutionary message, while also mounting a challenge to Donald Trump’s claim to low-education white voters — has proven to be delusional. And while he may have gotten his rivals to embrace versions of some of his signature proposals, the Democratic Party is undergoing a long-term shift that does not bode well for his brand of politics."

""Will ambitious Democrats and aspiring socialists learn from Sanders’s failure? On one hand, there are already signs that would-be inheritors of the Sanders legacy are abandoning his uncompromising politics. On the other hand, the next socialist to revise her political views on the basis of evidence would be the first."

"During Carlson's Wednesday night monologue, the host said Sanders's suspended campaign was structured to push the Democratic Party further to the left, later asserting he "wanted to lose" to feel "virtuous." "That's it for Sanders," Carlson said. "He's 78 years old. He will never be the president, but he did leave his mark. For two cycles in a row, Bernie Sanders evoked panic at the highest levels of the DNC. Twice in a row, Democratic Party leaders managed to crush him in the end, and they did that despite the fact that Sanders had a large and passionate following, as well as a genuinely populist message.""

""If the Democratic Party isn't bad enough for Sanders to attack it, then why do we need a revolution? Sanders never answered that question, and now he never will, because underneath it all, he was a party man to the core," Carlson concluded. Sanders announced Wednesday he would drop out of the 2020 presidential race but insisted he would remain on future primary ballots and "continue to gather delegates.""

"It isn’t just that the ex-veep has a nearly insurmountable delegate lead or that the logistics of voting in the remaining 19 primary states are so fiendishly difficult there’s little point in continuing a long-shot bid. It’s that the subject Sanders has hammered home with metronomic monotony for the better part of a decade — the promise of a revolution that has undergirded his two presidential candidacies and his unstoppable fundraising machine — just doesn’t matter right now."

"A government already $20 trillion in debt just increased its debt liability by as much as one-third in one fell swoop as part of the effort to stave off a global economic disaster on the scale of the Great Depression — and will almost certainly have to go back to the well one or two more times as the months pass. The issue for our leaders ­going forward is how on earth we are going to get out of this fallout shelter we’ve constructed for ourselves and achieve some kind of financial stability afterward. Whatever the world is going to look like once this is over, it won’t be a world that will have time for the ludicrous lemonade delusions of Bernie Sanders."

"Sanders, a onetime front-runner who promised to lead a grassroots political revolution into the White House, acknowledged he no longer had a path to victory after a string of decisive nominating contest losses to Biden but promised to work with his more moderate former rival to oust Trump. The independent U.S. senator from Vermont said the coronavirus outbreak, which has taken him off the campaign trail and limited his ability to get his message out, required a broad response and urgent attention in Congress."

"Many of Sanders’ policy positions have become part of the everyday Democratic Party debate, including his Medicare for All proposal that would create a government-run healthcare system to replace the current blend of private medical insurance and public programs. He also advocated a $15 minimum wage, tuition-free public colleges and higher taxes on the wealthy."

"President Trump on Wednesday urged Sen. Bernie Sanders's supporters to join the Republican Party after the independent Vermont senator announced he was suspending his bid for the Democratic presidential nomination. Trump also thanked Sen. Elizabeth Warren (D-Mass.), reiterating his belief that she may have taken away enough votes from Sanders on Super Tuesday last month to cost him states. Warren finished third or in some cases a distant fourth in each state Joe Biden won on Super Tuesday."

"The president has sought for months to stoke tensions within the Democratic Party around Sanders's candidacy. He has repeatedly suggested the party establishment was attempting to "steal" the nomination from the progressive senator, though Wednesday's tweet marked his most explicit outreach to potentially disaffected Sanders supporters."

Bernie Sanders is out, but his influence on Democrats lives on

"Most Sanders supporters can be expected to vote for Mr. Biden, if only as the vehicle for ousting President Donald Trump. But in a close race, any drop-off in Democratic participation in battleground states could doom the party’s chances. Mr. Biden has already shifted leftward. Last month, he adopted a version of Mr. Sanders’ college tuition plan and endorsed the bankruptcy plan of another liberal former candidate, Massachusetts Sen. Elizabeth Warren."

"Until 2015, Mr. Sanders toiled largely unnoticed. Then he took on Hillary Clinton, the embodiment of the Democratic establishment, and a movement was born, nearly grabbing the party’s presidential nomination. Like President Trump, he had tapped into something deep within the American electorate, a populist yearning to smash entrenched forces in Washington."

"The departure of the senator from Vermont, a democratic socialist who rose from relative obscurity to build a movement and become a two-time runner-up for the nomination, marked the close of a roller-coaster primary race that started more than a year ago. What began as the most diverse presidential field in history, featuring more than two dozen candidates, finished as one white man in his 70s handed off the nomination to another. Biden’s own prospects had been written off not long ago, before a bracing and dramatic surge in the March primaries driven in part by the establishment closing in to embrace him."

"His unexpected success in the first three primary contests of 2020, coming after he suffered a heart attack in October, made him the best-performing socialist contender in U.S. history, as well as the strongest Jewish presidential candidate. Sanders, 78, was also the oldest candidate to go so far in the process."

"Sanders ran into a wall in 2016 among black voters. Hillary Clinton catapulted herself to victory by winning blowouts throughout the South, where black voters make up a huge chunk of primary voters. Sanders needed to improve upon his performance. Instead, Sanders did as bad in 2020 among this pivotal group. Among African Americans who voted for Biden or Sanders, Sanders won just 23% in the median state with an entrance or exit poll. That was the same percentage he garnered in 2016. Black voters propelled Biden to his big win in South Carolina, which started him on his journey to defeating Sanders."

"Sanders continuously said he would get young people to come out and vote. Sanders, of course, won big majorities among young voters in both 2016 and 2020. The problem is that there was no upswing in youth turnout relative to other voters. In the median state with an entrance exit poll, those under 45 years old made up 39% of Democratic primary voters in 2016. This year, they were 34%. So if anything, youth turnout may have, in fact, dropped."

We Lost the Battle, but We’ll Win the War

"After Sanders won the Nevada primary, a wide range of national polls showed Bernie with a double-digit lead over the Democratic field...Then, in a single unprecedented twenty-four-hour period, Pete Buttigieg and Amy Klobuchar suddenly withdrew and endorsed Biden, joined by Harry Reid, Beto O’Rourke, and a cavalcade of congressional Democrats. The establishment had spoken, and the choice was made — a clear signal had been sent to nervous Democratic voters. Within a week, Biden’s national support surged by 25 percent."

"Even at my most pessimistic, I’d say we’re looking at no more than twenty or thirty years max for a decent social-democratic project to truly take hold of American life. Like the Second Avenue Subway line, it’s already kicked off in fits and starts over the decades. We just have to finish the job. So, dry your eyes, Bernie bros. For the first time in decades, the future is bright."