Senator Bernie Sanders's endorsement of former Vice President and rival Joe Biden (DE) for president has prompted wide-scale speculation, primarily about Biden's ability to win over progressives and incorporate some of Sanders's policies into his own White House plan.

From the Center
308
Elections
If Biden wants to win over Bernie Sanders' supporters and beat Trump, he needs to back up his promises with the right people
Business Insider 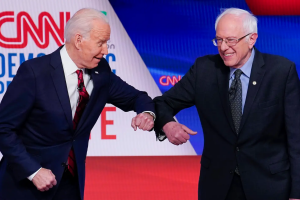 Nearly 12 years ago, Barack Obama began staffing his administration in the middle of a global economic crisis. Despite the high hopes of the progressive forces that catapulted Obama into office, his transition set the tone for a presidency that would be steered by corporate insiders.

In one notorious example, Citigroup continued to pay a top executive, Michael Froman, while he served on the board of Obama's transition team, playing a key role in filling the administration with Wall Street insiders, whose firms were seeking government support amid the financial...

In 2016, Bernie Sanders endorsed Hillary Clinton on July 12, two weeks before the start of the Democratic convention. This year, Sanders endorsed Joe Biden on April 13, offering much more time for the party to achieve the unity it needs to prevail in November.

As befits the moment, they did it over a joint livestream. 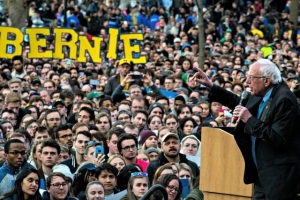 On Monday, shortly after Sanders threw his backing behind the former vice president, the senator’s one-time campaign spokeswoman, Briahna Joy Gray, announced that she was not following suit. Gray, who has made no effort to conceal disagreement with other high profile national Democrats, asserted she was unable to support Biden because of his unwillingness to adopt progressive stances on the economy and healthcare.

Can Biden break through Trump’s base of Hispanic voters?
ANALYSIS

When Juan Suarez-Rivas was 17, he volunteered to join a CIA-sponsored group of Cuban exiles who wanted to overthrow Fidel Castro from power. He had only been...

Let Her Speak event aims to get Jo Jorgensen on debate stage against President Trump, Biden

The Harris County Libertarian Party is hosting an event that attempts to get Jo Jorgensen on the debate stage against President Donald Trump and democratic...

Why The 2020 Presidential Election Is Not 2016
ANALYSIS

Democrats are haunted by the ghosts of 2016. Hillary Clinton led in many polls over Donald Trump throughout that election cycle, and while the national...

WASHINGTON (JTA) — Democratic presidential candidate Joe Biden is expected to name his running mate in the next two weeks, and while the list of contenders has...

The Times of Israel

The Times of Israel
Joe Biden

Jo Jorgensen on Black Lives Matter: 'I Think We Should Support the Protesters'
ANALYSIS

It's Thursday in Nashville. Libertarian presidential nominee Jo Jorgensen has parked her blue campaign bus in Centennial Park for her "Real Change For Real...

The Libertarian Party's presidential nominee, Jo Jorgensen, didn't attend a campaign event after getting bitten by a bat. Jorgensen, 63, said she missed a...

In fifteen years practicing election law, I have never seen anything as craven and shameful as the Kanye con job Donald Trump and his sycophants have attempted...