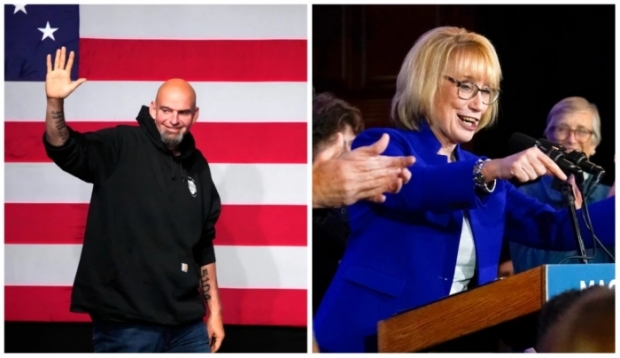 Congress will look a lot different when the final results from the 2022 midterm elections are tallied, but the expected "red wave" of Republican success amid frustration with inflation and President Joe Biden didn't materialize.

The Senate remains too close to call. Democrats flipped a key seat in Pennsylvania, while Republicans picked up wins in Ohio and Wisconsin. Winners have yet to be projected in Arizona and Nevada, and results might not be known until next week. Alaska's Senate race is going to a runoff, as is the potentially-pivotal Georgia race.

Republicans are still expected to win a majority in the House of Representatives, but it's unlikely to be as large as many predicted.

Reports from across the political spectrum highlighted Republican disappointment as the widely-expected red wave didn't happen, and some on both sides cited a lack of focus on abortion and too much influence from former President Donald Trump as potential factors driving GOP underperformance.

See the rest of our 2022 elections coverage:

"With the final votes still trickling in, pro-choice forces were poised to deliver a clean sweep on the five abortion-related state ballot initiatives. Proposed constitutional amendments to “codify Roe” won handily in California, Michigan and Vermont, while a measure to add a pro-life provision to the state constitution was defeated in Kentucky by a 52% to 47% margin."

"Except for deep-red states where a Republican corpse would have beaten a Democrat, voters choosing in actually competitive races — who everyone expected would behave like midterm voters usually do and lean toward the out party — took one look at Trump’s handpicked acolytes and gagged."

How did candidates who questioned, denied 2020 outcome fare in Tuesday's elections?

"Hundreds of candidates who openly questioned or denied the legitimacy of the 2020 presidential election outcome ran for office in elections across the country Tuesday. They included candidates who ran in states – Arizona, Georgia, Michigan, Nevada, New Mexico, Pennsylvania and Wisconsin – allegedly targeted by a scheme to send fake electors to Congress for the purpose of falsely handing former President Donald Trump the 2020 presidential election."

"This summer’s Dobbs decision is hardly a magic bullet for Democrats, who still seem likely to lose control of the House of Representatives and may, depending on the outcome of three outstanding races, ultimately cede the Senate too. But despite those outcomes, the midterm shows a clear path forward for supporters of abortion rights: If a ballot initiative can win in Kansas or Kentucky, almost any place is fair game."

"Republicans are typically outspoken on abortion, particularly during the primaries. However, they went quiet following the Supreme Court's Dobbs decision and the Kansas abortion referendum, even as talking points from major GOP committees recommended the opposite."

‘Where’s the middle?’ In closely divided US, a country waits.

"Candidate quality still matters, with polls pointing to weak Republican candidates in some important Senate and gubernatorial races. And in a post-Roe America, abortion is a driver at the ballot, with voters in five states – Michigan, Vermont, Kentucky, Montana, and California – all voting in favor of abortion rights."