Why is it Taking So Long to Count Votes?

Arizona and Nevada are still counting votes, and results might not be final until next week. Why?

Key Quotes: Clark County, Nevada's registrar of voters said Friday is likely "when we’ll have the majority of the ballots counted." The Maricopa County, Arizona recorder's office described the early ballot-counting process, saying that "we scan the barcode that links to a registered voter. We make sure that’s a valid, registered voter and make sure the voter hasn’t cast a ballot previously, and then we capture the image of that signature affidavit...Once the signature is matched, we can forward that to the bipartisan ballot processing team."

For Context: Too-close-to-call Senate races in both states may decide which party controls the chamber. Ballot-counting issues at Arizona polling centers on Election Day frustrated voters and fueled unfounded theories about fraud.

Where People Agree: A Washington Examiner writer said the delays "are a choice, not an inevitability, and their results are irritating for people of all political persuasions." A Brennan Center for Justice (BCJ) writer said counting mail-in ballots slowly has "disastrous consequences for public trust in elections."

Where People Disagree: Citing misinformation about the counting process, the BCJ writer said blame should be "on the state legislators who failed to address a known source of conspiracy theories." The Examiner writer didn't cite concerns about misinformation, and focused on urging legislators to "look to Florida's system of tabulating votes and model their own systems after it."

Why Does It Take So Long to Count Mail Ballots in Key States? Blame Legislatures
Brennan Center for Justice 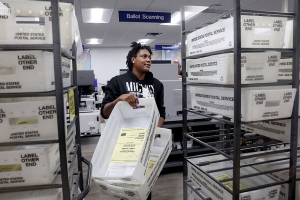 The slow pace of counting mail ballots in states such as Pennsylvania, Michigan, and Wisconsin was a key source of election disinformation in 2020. The delays provided President Trump and his allies with a pretext to claim that the election was being stolen from them as mail ballots, which overwhelmingly went for Biden, were counted and added to vote totals. “We were winning everything, and all of a sudden it was just called off,” Trump complained. “This is a fraud on the American public.”

Far from being a fraud, a conspiracy,...

Open on Brennan Center for Justice

Election officials in the largest county in Nevada said Wednesday that ballot counting will continue through next week, though the majority of 2022 ballots could be counted by Friday, as the nation anxiously awaits election results for the state’s Senate seat.

Clark County Registrar of Voters Joe Gloria said in a news conference that Tuesday, Nov. 15, is the deadline to verify mail-in ballots and Thursday, Nov. 17, is the latest date for releasing the final, unofficial election results.

Where were you when the great Bush v. Gore controversy began?

It was 22 years ago that Florida became the butt of the nation's and the world's joke because of the worst election debacle in modern history. The vote in Florida had finished very close on election night. Then, a machine recount tightened the margin between George W. Bush and Al Gore further. Then came hand recounts and controversies about undervotes and the means lawful to divine voter intention. Everyone in America learned what the word "chad" means and mastered a new...