Vote-counting problems in Maricopa County, Arizona frustrated voters at the polls Tuesday and fueled unfounded speculation that fraud was afoot.

Key Quotes: "Everything's going great out there," but after some people vote, "they try to run [their ballot] through the tabulator, and they're not going through" at roughly 20% of the county's polling locations, a county official said Tuesday. A volunteer Republican poll observer in a rural county town told Reuters that the issues represent "the total disenfranchisement of rural voters."

For Context: The county is the U.S.'s second-largest voting jurisdiction, and represents over 60% of Arizona voters. President Joe Biden beat former President Donald Trump, 50% to 48%, there in 2020. After Trump alleged voter fraud, those results were the subject of a Republican-led audit, which confirmed Biden's victory. The county will likely be crucial in deciding the winners of Arizona's 2022 gubernatorial race and Senate race, the latter of which could be pivotal in determining the Senate majority.

How the Media Covered It: Right-rated sources covered the story more, with many highlighting voices who criticized the situation, such as Trump, who said it "looks like a complete voting integrity DISASTER," and Charlie Kirk, who called it "manufactured chaos" and encouraged Republican voters to "stay in line." Some left- and center-rated media, such as NPR and Reuters (Center bias), said "Republicans seized" on the issues and sought to highlight the lack of evidence for voter fraud speculation. 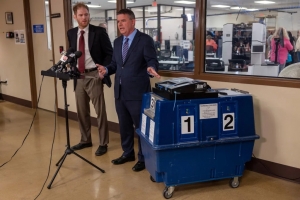 About 1 in 5 polling locations in Maricopa County, Ariz., were experiencing a technical problem with their ballot tabulator machines in the first hours of Election Day — but officials say the votes will still be counted, thanks to their redundancy protocols.

"We've got about 20% of the locations out there where there's an issue with the tabulator," Board of Supervisors Chairman Bill Gates said in a video update posted online. Describing the problem, he said that after some voters fill out their ballot, the machine won't accept it.

The update from officials comes as more reports of malfunctioning voting machines emerge in the Arizona county. One poll worker was seen telling a voter that "nothing is working for the last half hour," and reiterated the statements made by county officials.

Bill Gates, Chairman of the County Board of Supervisors, and County Recorder Stephen Richer provided an update...

Voting got off to a glitchy start in Maricopa County on Tuesday morning because of widespread issues with the machines that count voters' ballots.

All of the county's 223 voting locations opened on time, but an hour into the election, voters and poll workers at some sites started reporting issues with tabulators.

"After people have voted (their ballot), they try to run them through the tabulator, and they're not going through," Board of Supervisors Chairman Bill Gates said.

Voters have the option...