The AllSides Media Bias Chart™ helps you to easily identify different perspectives and political leanings in the news so you can get the full picture and think for yourself.

Knowing the political bias of media outlets allows you to consume a balanced news diet and avoid manipulation, misinformation, and fake news. Everyone is biased, but hidden media bias misleads and divides us. The AllSides Media Bias Chart™ is based on our full and growing list of over 1,400 media bias ratings. These ratings inform our balanced newsfeed.

Unless otherwise noted, AllSides rates only online content, not TV, radio, or broadcast content. Our chart helps to free you from filter bubbles so you can consider multiple perspectives. Learn about the different types of media bias, or view the AllSides Fact Check Bias Chart™.

The AllSides Media Bias Chart™ is more comprehensive in its methodology than any other media bias chart on the Web. While other media bias charts show you the subjective opinion of just one or a few people, our ratings are based on multipartisan, scientific analysis. We use multiple methodologies to rate bias, including expert panels and surveys of thousands of everyday Americans. 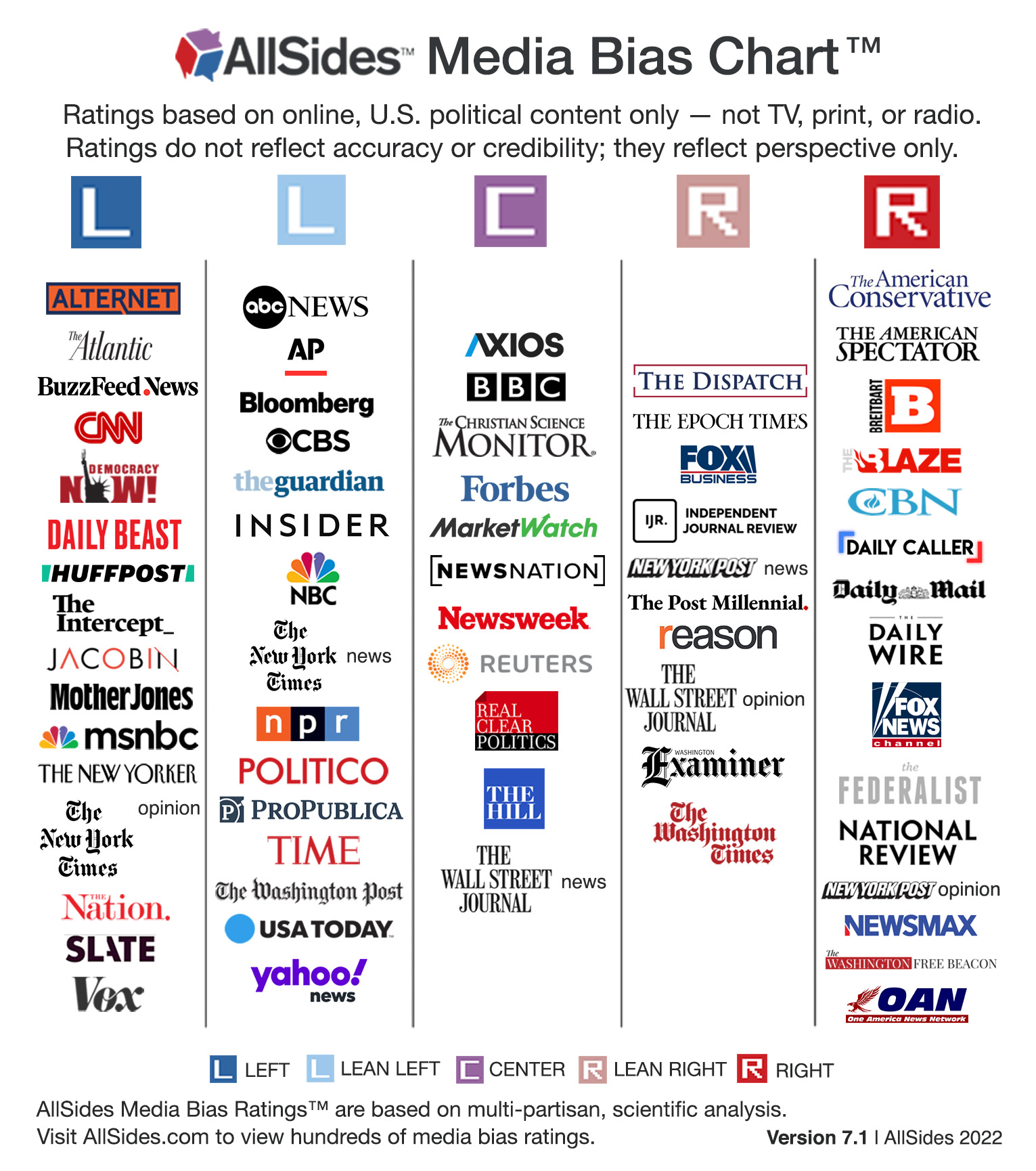 Here's how the AllSides Media Bias Chart™ differs from other media bias charts:

Americans are more polarized than ever — if you’re like us, you see it in the news and on your social media feeds every day. Bias is natural, but hidden bias and fake news misleads and divides us. That’s why AllSides has rated the media bias of over 1,400 sources. and put it into a media bias chart. The AllSides Media Bias Chart™ shows the political bias of some of the most-read sources in America.

The outlets featured on the AllSides Media Bias Cart™ have varying degrees of influence. Read about whether conservative or liberal media outlets are more widely read.

News media, social media, and search engines have become so biased, politicized, and personalized that we are often stuck inside filter bubbles, where we’re only exposed to information and ideas we already agree with. When bias is hidden and we see only facts, information, and opinions that confirm our existing beliefs, a number of negative things happen: 1) we become extremely polarized as a nation as we misunderstand or hate the "the other side," believing they are extreme, hateful, or evil; 2) we become more likely to be manipulated into thinking, voting, or behaving a certain way; 3) we become limited in our ability to understand others, problem solve and compromise; 4) we become unable to find the truth.

It feels good to hear from people who think just like us, and media outlets have an incentive to be partisan — it helps them to earn ad revenue, especially if they use sensationalism and clickbait. But when we stay inside a filter bubble, we may miss important ideas and perspectives. The mission of AllSides is to free people from filter bubbles so they can better understand the world — and each other. Making media bias transparent helps us to easily identify different perspectives and expose ourselves to a variety of information so we can avoid being manipulated by partisan bias and fake news. This improves our country long-term, helping us to understand one another, solve problems, know the truth, and make better decisions.

At AllSides, we reduce the one-sided information flow by providing balanced news from both liberal and conservative news sources, and over 1,400 media bias ratings. Our tools help you to better understand diverse perspectives and reduce harmful, hateful polarization in America. By making media bias transparent and consuming a balanced news diet, we can arm ourselves with a broader view — and find the truth for ourselves.

Some things we took into account include whether the source was a top outlet in terms of traffic according to Pew Research Center and Similarweb. We also took into account how often people search for the bias of that outlet on Google and visit AllSides as a result.

What Do the Bias Ratings Mean?

These are subjective judgements made by AllSides and people across the country. Learn our rough approximation for what the media bias ratings mean:

Does a Center Rating Mean Neutral, Unbiased, and Better?

Center doesn't mean better! A Center media bias rating does not mean the source is neutral, unbiased, or reasonable, just as Left and Right do not necessarily mean the source is extreme, wrong, or unreasonable. A Center bias rating simply means the source or writer rated does not predictably publish content that tilts toward either end of the political spectrum — conservative or liberal. A media outlet with a Center rating may omit important perspectives, or run individual articles that display bias, while not displaying a predictable bias. Center outlets can be difficult to determine, and there is rarely a perfect Center outlet: some of our outlets rated Center can be better thought of as Center-Left or Center-Right, something we clarify on individual source pages.

While it may be easy to think that we should only consume media from Center outlets, AllSides believes reading in the Center is not the answer. By reading only Center outlets, we may still encounter bias and omission of important issues and perspectives. For this reason, it is important to consume a balanced news diet across the political spectrum, and to read horizontally across the bias chart. Learn more about what an AllSides Media Bias Rating™ of Center rating means here.

We sometimes provide separate media bias ratings for a source’s news content and its opinion content. This is because some outlets, such as the Wall Street Journal and The New York Times, have a notable difference in bias between their news and opinion sections.

Does AllSides Rate Which Outlets Are Most Factual or Accurate?

AllSides does not rate outlets based on accuracy or factual claims — this is a bias chart, not a credibility chart. It speaks to perspective only.

We don't rate accuracy because we don't assume we know the truth on all things. The left and right often strongly disagree on what is truth and what is fiction. Read more about why AllSides doesn't rate accuracy.

Where Can I See Past Versions of the Chart?

Visit the AllSides Media Bias Ratings™ page and search for any outlet for a full summation of our research and how we arrived at the rating.

You can vote on whether or not you agree with media bias ratings, contact us, or sign up to participate in our next Blind Bias Survey.