The AllSides Media Bias Chart™ has just undergone some critical updates. We’ve clarified our rating for the Associated Press and strengthened our ratings for Forbes, The American Conservative, Politico, The Hill, The Daily Wire, and more. 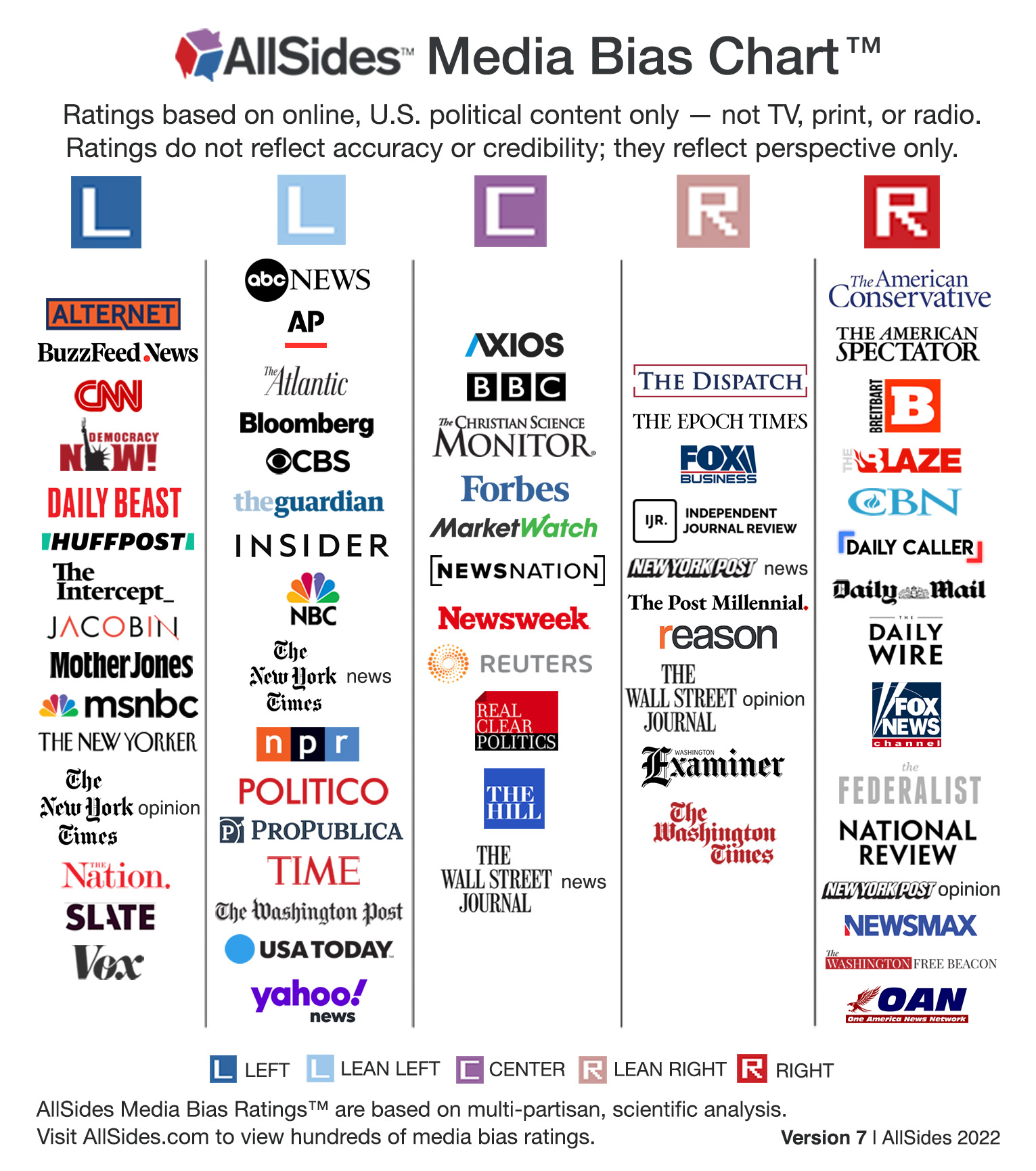 In Sept. 2020, AllSides split the Associated Press’ media bias ratings into two: one for AP’s Politics and Fact Check sections (which we rated Lean Left) and one for AP’s general or world news (which we rated as Center). At the time, we thought two ratings better captured AP’s vast amount of content, which is commonly featured in national and local outlets across the political spectrum via AP’s wire service, and differences between its political coverage and coverage of other matters. Reflecting these dual ratings, AP appeared twice on Version 6 of the AllSides Media Bias Chart™ — its politics rating in the Lean Left column, and its general rating in the Center column.

Over time, we discovered people often interpreted our AP ratings differently than we intended. With the AP logo at the top of the center column in our bias chart, people first noticed that, and thought we had rated AP’s U.S. political news content as Center, when in reality, our data clearly indicated a Lean Left bias.

In addition, AllSides doesn’t typically assess news on non-political stories when choosing a bias rating for news outlets. We thought that AP’s unusually large quantity of news warranted two separate ratings, but we later learned that treating AP differently than other outlets simply confused our audience.

Therefore, in Aug. 2022, we decided to make a change to more clearly convey our data and bias analysis. The Associated Press now has just one rating: Lean Left. Like our other media bias ratings, this rating reflects the bias in AP reports on U.S. political news. Like other outlets with a fact checking service or department, we continue to rate AP’s Fact Check section separately. This is consistent with AllSides’ decision to rate other media outlets’ fact check sections separately, such as BBC Fact Check, Breitbart Fact Check, CNN Fact Check, Reuters Fact Check, and more. These and more ratings appear on our AllSides Fact Check Bias Chart™.

AP now appears only in the Lean Left column in Version 7 of the AllSides Media Bias Chart™, and we will continue to review this source for bias. We also invite you to give feedback on AP’s Lean Left media bias rating by voting here.

About the AllSides Media Bias Chart™

We don't rate accuracy or credibility — this chart speaks to political perspective only. Learn why AllSides doesn't rate media accuracy.

Center doesn't mean better! A Center media bias rating doesn't necessarily mean a source is neutral, unbiased, perfectly reasonable or credible, just as Left and Right don't necessarily mean extreme, wrong, or unreasonable. A Center rating simply means the source does not predictably show bias on either end of the political spectrum — conservative or liberal. A Center outlet may still show some bias or omit important perspectives. There is rarely a perfect Center outlet — some of our Center outlets are somewhat Center-Left (such as BBC), while a few are somewhat Center-Right (such as RealClearPolitics).

We encourage people to read outlets across the political spectrum, not just Center outlets.

We want to hear from you! Vote on our ratings or sign up to participate in our next Blind Bias Survey.