AllSides is excited to introduce the AllSides Media Bias Meter™!

In addition to our Left, Lean Left, Center, Lean Right, and Right media bias ratings, outlets are now assigned a number on a scale from left to right. 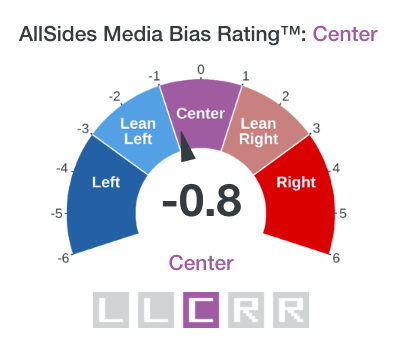 Why a scale? It allows us to convey nuance. Some media outlets are on or close to the borderline of two bias ratings. For example, Reuters is Center, but pretty close to Lean Left. Its bias meter rating is -0.8. 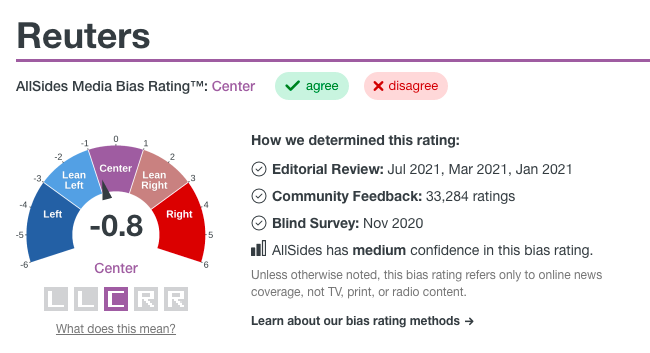 Our new bias meter helps us to convey nuance and give you more trustworthy ratings. You can see the bias meter in action on any AllSides source page: search for any media outlet here.

The bias meter categories are:

The AllSides Media Bias Meter™ strengthens and improves our ratings. We believe this is an important step toward empowering news readers and creating a more transparent media landscape. 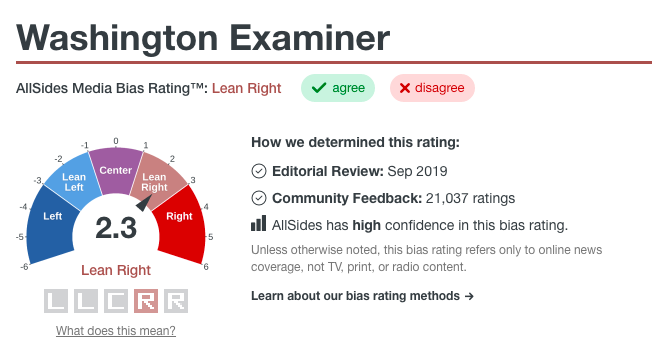 How Are Bias Meter Ratings Calculated?

The numerical rating shown in the AllSides Media Bias Meter™ is determined through a combination of methods.

Meanwhile, during a Blind Bias Survey, which is another AllSides media bias rating method, bias meter ratings are arrived at somewhat differently. Respondents across the political spectrum are instructed to read headlines and news reports from a media outlet, and then provide a rating for the outlet on an 11-point Likert scale.

You’ll notice that for Blind Bias Surveys, AllSides’ numeric scale runs from -9 to +9, which is different from the AllSides Media Bias Meter™ scale of -6 to +6. This is due to the nature of the Blind Bias Survey methodology, in which an outlet could hypothetically (but rarely) land further left than -6 or further right than +6. However, in calculating the overall AllSides Media Bias Rating™ for an outlet, the bias meter rating is capped at -6 and +6 because of the methodology used in other analyses, such as Editorial Reviews.

The Final Determination, or final bias meter rating, depends on how many review methods have been applied to the source and when.

We want to hear from you. If you have any feedback about our bias meter, you can email us here.

Become a Sustaining Member or make a donation to AllSides. Sustaining Members read AllSides ad-free and unlock other benefits. Any contribution amount supports our media bias ratings, as well as our mission of freeing people from filter bubbles so they can better understand the world — and each other.