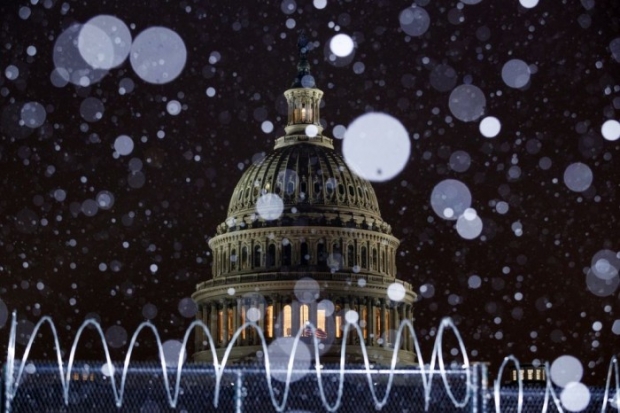 Former President Donald Trump's second impeachment trial began in the Senate this week. Trump is charged with "incitement of insurrection" leading to the U.S. Capitol breach on Jan. 6 that left five people dead. Senators voted 56-44 Tuesday to proceed with the trial. 67 votes would be needed to convict Trump, who was impeached by the House of Representatives on Jan. 13 while he was still in office.

Coverage on all sides noted that a conviction is improbable. Many reports from right-rated sources focused on Trump's defense, and on the argument that the trial is a waste of time because Trump is no longer president and unlikely to be convicted. Left- and center-rated outlets concentrated more on the trial proceedings and the evidence being presented.

Impeachment is the most-covered story in the media this week, but there are many other newsworthy things happening as President Joe Biden begins his administration and efforts to control the COVID-19 pandemic continue.

On the Blog: We broke down a piece from Poynter about how to spot media bias by omission in news reports; and the One America Movement is leaning on good deeds and religion heal polarization. Will it work?

More from AllSides: Join the free livestream event to celebrate the launch of The Reunited States, a documentary about bridging divides! Featuring special guests Van Jones and Meghan McCain. The documentary features AllSides and some of our partner organizations — plus a brief interview with our CEO; Download the AllSides mobile app for balanced news on the go. Available for iOS and Android; and you can support our work and mission by becoming a sustaining member of AllSides. Sustaining memberships allow you to read AllSides ad-free.

"The House impeachment managers spent the second day of Trump’s Senate impeachment trial describing how Trump tried to sow doubt about the Nov. 3 election results months beforehand, as well as his weeks-long efforts afterward to reverse his loss to Democrat Joe Biden with “the big lie” that the election was stolen. The argument anticipates a central part of Trump’s defense: that his words to a crowd of supporters in Washington before they swarmed the Capitol were standard political rhetoric that doesn’t amount to incitement of insurrection, as the House article of impeachment charges."

Trump’s lawyers and the Constitution

"Lawyers for Donald Trump stretched beyond the facts when they argued there’s an open-and-shut case that the Constitution bars impeaching former presidents. That question is not settled, though the weight of legal views contradicts the Trump team’s assertions. Bruce Castor and David Schoen addressed the Senate Tuesday on the first day of Trump’s trial after Democratic impeachment managers from the House presented the opening of their case for conviction. Trump is accused of inciting the deadly siege on the U.S. Capitol on Jan. 6...While Trump is indeed the first president to be tried after leaving office, making it new legal territory, it’s not a “radical” concept in legal circles."

"The Senate voted 56-44 to proceed to the first-ever trial of a former president, rejecting his defense lawyers’ argument that Trump was beyond the reach of the Senate after having left the White House on Jan. 20. Democrats hope to disqualify Trump from ever again holding public office, but Tuesday’s outcome suggested they face long odds. Only six Republican senators joined Democrats to vote in favor of allowing the trial to take place, far short of the 17 needed to secure a conviction. Convicting Trump would require a two-thirds majority in the 50-50 Senate."

"The impeachment trial on Wednesday reignited some of the intraparty fight that flared up among Republicans last week in the House. Rep. Adam Kinzinger of Illinois, one of ten House Republicans to vote to impeach Mr. Trump last month, singled out Sen. Josh Hawley (R., Mo.) on Twitter...Mr. Kinzinger recently launched a political action committee aimed at pushing back against conspiracy theorists and extremism...Mr. Hawley was the first senator to say he would object to the results of the 2020 presidential election, and he continued with his objections when Congress resumed on Jan. 6 after the riot."

"Confusion reigned in the final moments of Day 2 of former President Donald Trump’s Senate impeachment trial on Wednesday when an angry GOP Sen. Mike Lee insisted he had been misquoted by House impeachment managers. As the Democratic lawmakers closed their first of two days of arguments, Lee (R-Utah) rose to his feet and demanded they strike from the record an account the House impeachment managers gave of a phone call Trump mistakenly placed to Lee during the Jan. 6 Capitol riot."

"The historic second impeachment trial of former President Donald Trump will open in the Senate on Tuesday, with his attorneys saying Mr. Trump is blameless for the insurrection at the U.S. Capitol and accusing Democrats of exploiting the deadly riot for partisan gain. Defense attorneys David Schoen and Bruce Castor said in a legal brief filed Monday that the impeachment trial is an act of “political theater” by Democrats who are still in the grips of “Trump derangement syndrome,” even though Mr. Trump left office on Jan. 20."