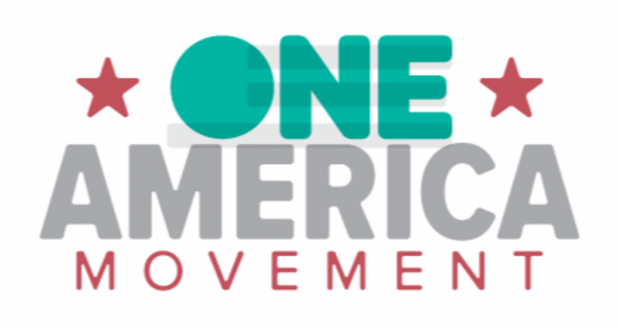 Political polarization is a massive and complicated issue, one which can be explained, and combatted, through a number of different approaches. The One America Movement utilizes a unique approach to addressing polarization in the United States. It draws from psychology and social science, recruiting local religious leaders and grassroots organizers. It trains religious leaders and helps facilitate collaborative activities that can bring groups together to reduce political polarization.

Its connection to religious congregations creates a pathway to reach a very broad audience. According to the Pew Research Center in 2014, about one-third of Americans attended religious services each week, and another third attended at least a few times per year. Religious leaders are uniquely qualified to shape the behaviors and values of their congregations, and create broad impact in society.

Grassroots organizing, particularly among religious leaders, has a long history of successfully gathering support for social movements. Historically, religious organizations have been vital to the advancement of many social movements. Some prominent examples include the prominent role of the Southern Christian Leadership Conference led by Dr. Martin Luther King Jr. to the Civil Rights Movement in the 1950s and 1960s, and the Catholic Worker’s movement in the 1930s.

Social movements, while not usually overtly religious, often rely on people acting on their religious convictions. A message of unity and treating others well in the face of extreme division corresponds with many religious teachings.

One psychological concept the One America Movement utilizes as a method of bringing groups together is known as “superordinate goals.” Superordinate goals are goals that get people from opposing sides to come together to achieve a shared task.

One example of a superordinate goal the One America Movement has tried to address involves confronting the opioid epidemic. It organized two listening sessions in the panhandle of West Virginia with a couple of conservative pastors and many others either affected by opioids or trying to limit its impact. These pastors were connected with more liberal rabbis in Washington, DC, with goals to share best practices in both white and black communities affected by drug addiction.

Recently, the One America Movement has recognized that COVID-19 can put volunteers at risk from in-person depolarization work, but it still wants to bring Americans together during the pandemic. They recognize that this unique and challenging time calls for creative solutions.

Their website reiterates the need to grapple with systemic issues, stating, “We can sweep our differences under the rug, promoting a false sense of unity. We can weaponize the pandemic and use it to further divide us. Or, we can commit to rebuilding our country, addressing our deepest challenges while moving forward together.”

The One America Movement sees the COVID-19 pandemic as a uniquely shared experience among all Americans. The movement continues to bring Americans together across religious, racial and political divides through a series of digital events, focusing on relationship building to set the stage for collaborative work when it is safe to do so. These events include a “How to Talk to Your Neighbor” guide and training series where participants are taught a framework to approach challenging topics in a healthy and productive way.

Congregations already connected with the One America Movement continue to meet via online platforms — creating a very different type of intimacy with participants getting a peek into each other’s homes and lives — and building relationships at a time when so many Americans found themselves isolated.

In the United States today, we as a whole face enormous challenges, from the COVID-19 pandemic to race relations to the opioid epidemic. The One America Movement helps religious leaders not only facilitate productive discussions on these topics, but also gather their congregants for on-the-ground activities to solve these problems. People coming from very different backgrounds, and with very different belief systems can start to see overlaps and can come together to work towards common goals.

The task of bringing Americans together can seem daunting. The work done by the One America Movement is an important step. It uses a thoughtful approach informed by science, working within religious communities to tackle the most pressing issues of the day, and engaging congregants to create positive, unifying change in their broader communities.

The One America Movement aims for a win-win: reducing polarization while helping address the numerous other challenges facing the country.

Max Karlin is a life-long resident of Brooklyn, NY and a recent graduate from State University of New York (SUNY) College at Oneonta with a bachelor’s degree in Political Science. He is passionate about public policy, politics, and reducing extreme partisanship in American politics. Max has a Lean Right bias.