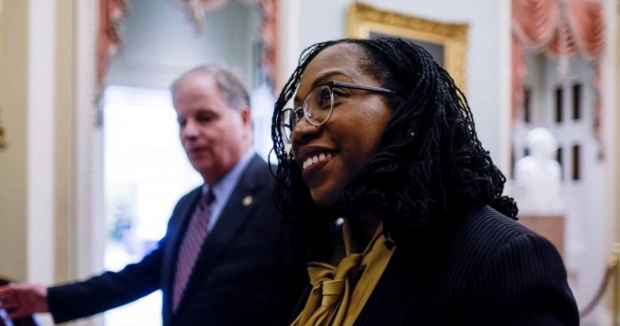 Jackson's hearings began Monday with opening statements, and continued on Tuesday with some Republicans accusing her of being soft on crime, while Democrats spoke to her accomplishments and qualifications. During Wednesday's hearings, Jackson took more questions on race, crime and biology. Sen. Lindsey Graham (R-S.C.) also asked Jackson several times about her religion, and drew comparisons to when Supreme Court Justice Amy Coney Barrett’s religion came under scrutiny during her 2020 hearings. Jackson's hearings conclude Thursday.

The left often highlights the historic nature of Jackson's nomination, frames her as reasoned and non-partisan, and dismisses criticisms of her as politicized, sexist and/or racist. Many on the right raise questions about Jackson's defense of convicted terrorists as a federal public defender and purportedly lenient sentences for child pornography offenses. Some also highlight her refusal to answer when asked to define "woman" as an example of her subscribing to "woke" ideology. Others on the right argued that some of those questions are unjustified while still criticizing Jackson's judicial philosophy.

Meanwhile in the Russia-Ukraine conflict, Ukraine fights to stalemates in some areas around Kyiv while Russia ramps up attacks in others. On Wednesday, the U.S. formally declared that Russian forces had committed war crimes.

We binge-watched 14 hours of Ketanji Brown Jackson's speeches. Here’s what we learned.

"What emerged is an in-her-own-words review of Jackson's meteoric rise from a high school debater – who even then knew she wanted to be a judge – to Harvard University degrees recipient, federal public defender, private lawyer, federal sentencing commission appointee and, finally, federal judge."

"But even if they don’t succeed, Republicans are tapping into the ugliest ideas that exist in American society. They’re throwing around allegations that rely on distorted versions of someone’s actions. And they’re doing so in the hopes of derailing the nomination of a judge with an entirely mainstream record."

"The Senate voted 53-44 last year to confirm Jackson as a member of the U.S. Court of the Appeals for the District of Columbia Circuit, where she has authored two majority opinions including one favoring public sector unions that challenged a regulation issued under Republican former President Donald Trump that restricted their bargaining power."

"The Supreme Court is expected to decide in coming months the lawfulness of Mississippi’s 15-week abortion ban, which poses a direct clash with Roe, which bars states from prohibiting abortion before a fetus is viable, typically around 24 weeks. A tense Supreme Court hearing in the case in December suggested the conservative-majority court is willing to place new restrictions on abortion."

"Jackson bobs and weaves, demonstrating that she is well versed in constitutional originalism and statutory textualism – the judicial philosophy that judges must apply the law as written, consistent with its public meaning at the time it was adopted, not make it up as they go along. But Jackson has been careful just to describe this philosophy, not to adopt it as her own."

"Georgetown Day School, where Supreme Court nominee Ketanji Brown Jackson serves on the board of trustees, recently hosted a critical race theorist to indoctrinate pre-K students as part of a 'Black Lives Matter at School’s Week of Action,' a campaign that seeks to turn children into extremist political activists."