Jackson, 51, was nominated for the lifetime role by President Joe Biden to replace liberal Justice Stephen Breyer, who plans to retire at the end of the current term. She and senators will make opening statements Monday on the arguments for and against her confirmation, and then Jackson will take questions from senators on Tuesday and Wednesday. Witnesses will testify on Thursday, and Democrats hope to confirm her by next month. No Democratic senators have shown opposition to Jackson; some Republicans, including Senate Minority Leader Mitch McConnell (R-Ky.), have framed her as far-left while also showing openness to meeting with her. In the evenly divided Senate, Vice President Kamala Harris would break a tied vote and confirm Jackson to the Supreme Court. If confirmed, Jackson would be the court's first black female justice.

Some coverage from right-rated sources highlighted criticism from Sen. Josh Hawley (R-Mo.) and others who say Jackson has a history of issuing lenient sentences for child pornography offenses. Left-rated sources focused less on criticism of Jackson's record and more on her nomination's historic nature, and also framed the Senate as likely to confirm her. 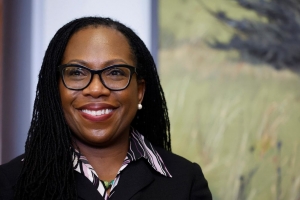 Supreme Court nominee Ketanji Brown Jackson is before the Senate Judiciary Committee on Monday, as Democrats aim to confirm the first Black woman justice and many Republicans search for a unified message to oppose her.

Democrats have touted President Joe Biden's pick as a qualified, "historic" nominee, while Republicans have criticized her record on crime and the support she holds from left-wing groups.

"It's going to be an historic moment on Monday, as Judge Jackson appears before the committee," Democratic Sen. Dick Durbin of Illinois, the chairman of the Judiciary Committee, said on the Senate... 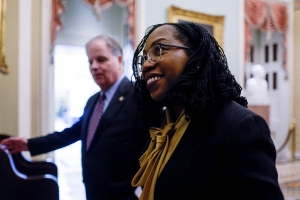 If confirmed as its first Black woman justice, Ketanji Brown Jackson would add not only racial and gender diversity to the U.S. Supreme Court but would also bring a varied legal background including a stint representing low-income criminal defendants.

Jackson, 51, served early in her career as a Supreme Court clerk for Justice Stephen Breyer, whose retirement announced in January created a vacancy on the nation's top judicial body that President Joe Biden picked her to fill. Biden, a Democrat, last year appointed Jackson to an influential Washington-based appellate court... 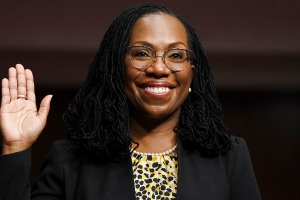 Sen. Chuck Grassley is calling for records related to Judge Kentanji Brown Jackson’s time on the U.S. Sentencing Commission ahead of her Supreme Court confirmation hearing next week, amid Republican claims she was overly lenient to child pornographers -- a charge that the White House is branding a "debunked" and "desperate" conspiracy theory.

"Judge Jackson’s history of sentencing below guidelines, particularly in cases involving child exploitation, raises legitimate questions about her views on penalties for these crimes," Grassley, ranking Republican on the Senate Judiciary Committee, said in a statement on Saturday....