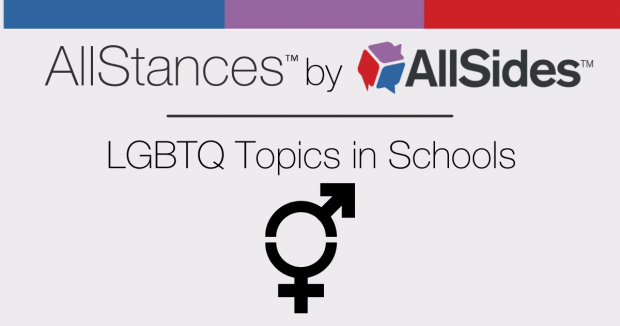 Florida’s Parental Rights in Education law, dubbed by opponents as the “Don’t Say Gay” law, is sparking a wide array of arguments on all sides of the spectrum.

Should public schools teach primary school students about sexual orientation and gender identity? At what grade level should teachers start teaching LGBTQ+ topics in the classroom? Is banning the discussion of these issues a threat to LGBTQ+ identities and free speech, or a necessary measure to ensure classroom content is age-appropriate and to respect parental beliefs on controversial matters?

Explore all perspectives, stances, and arguments for and against teaching LGBTQ+ topics in the classroom with AllStances™ by AllSides.

A new Florida law limiting classroom discussion in public schools about sexual orientation and gender identity highlights a key battle within the modern culture war and clashes about “woke” ideologies.

Florida’s Parental Rights in Education law states that “classroom instruction by school personnel or third parties on sexual orientation or gender identity may not occur in kindergarten through grade 3 or in a manner that is not age-appropriate or developmentally appropriate for students in accordance with state standards.”

Opponents have dubbed it the “Don’t Say Gay” law, and some academics have argued that the bill’s intentions are vague and unclear. Some of the legislation’s supporters have framed it as an “Anti-Grooming Law” that keeps “transgender ideology” out of the classroom, and lawmakers in Georgia recently introduced a similar bill. Coverage of the bill from news outlets on the left and right reflects the wide perception gap on whether the bill harms the LGBTQ+ community or protects parents’ rights.

As the percentage of U.S. people who identify as LGBTQ+ continues to grow, Americans remain divided over the notion of incorporating discussions around sexual orientation and gender identity into school curriculums across the nation.

Some believe that banning discussions regarding sexual orientation and gender identity in primary school is a discriminatory notion that will lower many students’ self-esteem, and that progressing the understanding and acceptance of LGBTQ+ identities should begin in the classroom. Others believe that teaching very young children about these topics can lead to confusion or even indoctrination into what they consider a harmful ideology. Some want to reserve education about LGBTQ+ issues for older students — others would like to ban it from schools altogether.

Explore all the arguments, stances and perspectives around incorporating LGBTQ+ topics in schools. (Keep in mind that all stances aren't mutually exclusive — some viewpoints might align with multiple stances).

Stance 1: School Districts Should Actively Support and Teach LGBTQ+ Topics In The Classroom

CORE ARGUMENT: Acknowledging the LGBTQ+ community in the classroom is a fundamental step in terms of fully integrating them into society.

CORE ARGUMENT: Gender and sexuality should be taught in schools or available to learn about, but not overly emphasized.

Stance 3: LGBTQ+ Topics Should Be Introduced Only to Older Students And Kept To A Minimum

CORE ARGUMENT: Gender and sexuality shouldn’t be introduced into the classroom until children reach a certain age.

CORE ARGUMENT: LGBTQ+ topics should be kept outside of the classroom.