On Tuesday, Jackson responded to concerns by Sen. Josh Hawley (R-Mo.) over her purportedly lighter sentencing in child pornography cases, saying she followed statutory guidelines for sentences to be “sufficient, but not greater than necessary.” Sen. Lindsey Graham (R-S.C.), referencing Democratic skepticism of then-nominee Amy Coney Barrett’s religious views, asked Jackson, “What faith are you, by the way?” and “Could you fairly judge a Catholic?” Furthermore, Sen. Marsha Blackburn (R-Tenn.) asked Jackson, “Is it your personal hidden agenda to incorporate critical race theory into our legal system?”

Coverage of the hearings was starkly split between left and right-rated outlets. In Fox News (Right), Jackson “dodged” questions, “fumbled” answers, and was tied to a school that purportedly taught critical race theory. In CNN (Left), Jackson “rejected” Republicans’ “bizarre” criticisms and past “grievances.” Overall, right-rated outlets focused on criticisms of Jackson, while left-rated outlets praised her record and critiqued the right’s criticisms. On the issue of child pornography sentencing, while a Washington Examiner (Lean Right) writer argued Hawley had “every right” to raise concerns, articles in both ABC News (Lean Left) and National Review (Right) said Jackson’s sentencing record was “mainstream” and “standard fare.” 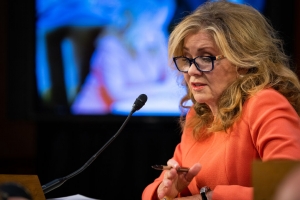 Senator Marsha Blackburn, Republican of Tennessee, ripped into Judge Ketanji Brown Jackson on Monday during her Supreme Court confirmation hearing, tying the nominee to a wide range of conservative grievances. But the lawmaker’s accusations appeared to often be based on quotes taken out of context. Here’s a closer look at some of her apparent sources.

Blackburn linked Jackson to the controversy over transgender athletes and women’s sports.

Ms. Blackburn portrayed as excessive the progressive push for transgender rights, decrying a recent victory at the N.C.A.A. swimming championships by a transgender female...

Judge Ketanji Brown Jackson opened the second day of her confirmation hearing Tuesday with a forceful defense of her record of sentencing child pornography offenders, pushing back against a recurring Republican attack line leveled against her.

Under questioning from Sen. Dick Durbin (D-Ill.), Jackson was asked to address a claim by Sen. Josh Hawley (R-Mo.) on Monday that her treatment of sentencing child sex offenders showed an “alarming pattern” of leniency.

“As a mother and a judge who has had to deal with these cases, I was thinking that nothing could be further from the truth,”...

The South Carolina Republican relitigated controversial moments from the confirmation hearings of judicial nominees, including Justice Amy Coney Barrett, whom Graham said was treated poorly when she was questioned about her Catholic faith by committee member Sen. Dianne Feinstein.