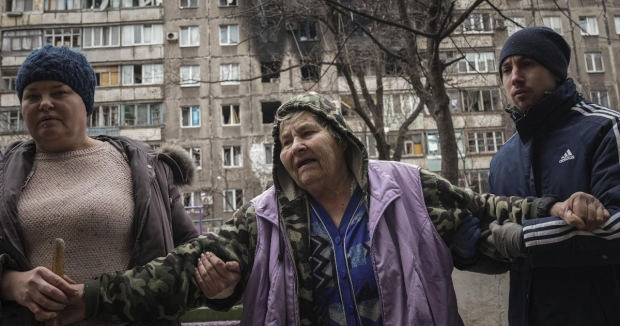 As our nation’s politics have become increasingly Balkanized, many of us have wondered if there is any plausible way to rebuild a political center where Democrats and Republicans can at least occasionally come together. Perhaps there was a visionary and unifying leader that could make that happen. Maybe the voters themselves would rise up and demand an end to the ceaseless partisanship and bickering. Of course, neither of these magical events has come even close to occurring. But in recent weeks, there has been something that has incentivized the two parties to collaborate.

It turns out that what we needed was a war.

No sane person, of course, wants a war, let alone needs one. But Russia’s invasion of Ukraine has spurred an effort toward bipartisanship the likes of which we have not seen in this country for some time. The first important ingredient for such unanimity is a villain, and American public opinion has turned overwhelmingly against Vladimir Putin. And Americans love an underdog, a role that the Ukrainian resistors are filling in almost storybook fashion.

But the cooperation across party lines has gone deeper than just sloganeering. More than 70% of U.S. voters say they are willing to pay higher gasoline prices that are resulting from an oil embargo against Russia, and while those numbers will undoubtedly drop over time, this heightened level of support gives Biden much more freedom to continue this type of pressure going forward. This public reaction is almost certainly the exact opposite of what Putin had anticipated, which means the economic burden on his own people will be significantly worse than that for which he would have been prepared.

This mindset quickly made its way to Capitol Hill. Democrats and Republicans in Congress joined forces to push the White House to embrace broader sanctions against Russia and additional support for Ukraine. GOP leaders have not only been supportive of President Biden’s efforts to construct an international coalition and to keep NATO unified, but have publicly complimented his work on the diplomatic front. There are already voices from both parties calling for more direct U.S. engagement, and it would not be surprising to see Biden follow their lead on this front as well.

Let’s not get carried away. The partisan animosities on most domestic issues still run as deeply as ever, and the resentments and rage of last January 6 still cast deep shadows over most congressional activity. But if the goal was not to suddenly transform American politics into a seashells-and-balloons era of comity and cooperation but rather to see if our leaders are still capable of working across party lines when circumstances demand, then it appears that some measure of progress has been achieved after all.

The war has also forced the most ideologically intense voices in both parties to back away from some of their closely-held goals — at least temporarily. Many progressive Democrats have been much more subdued in their opposition to increased military spending and their advocacy for shifting from fossil fuels to renewable energy during the current crisis, and most conservative Republicans are walking away from the isolationism and nationalism that characterized the Trump-era GOP. All but the most committed zealots in both bases recognize how public sentiment has changed on these issues over the last few weeks.

This bodes particularly well for those of us who have worried about the tremendous growth in the electorate’s isolationist tendencies in the years since the second Iraq war. After every large-scale war or severe economic downturn of the last century, the American people have decided that our country’s priorities should be on the home front and turned their attentions inward. After both world wars, Korea and Vietnam, this retrenchment left the global landscape open and available for malicious forces to assert themselves.

As recently as the 2020 presidential election, it looked as though both parties were motivated toward just this type of withdrawal from international geopolitics. Historically, a shift in those attitudes only takes place when a menace emerges to require direct U.S. military intervention. If there is a paper-thin silver lining to the tragedy that we are witnessing in Ukraine, it may be that the American people are once again realizing the importance of our country’s presence on the world stage to remind those bad actors that there are still consequences for their actions.

Want to talk about this topic more? Join Dan for his webinar "Politics In The Time of Coronavirus". Or read more of Dan’s writing at: www.danschnurpolitics.com.