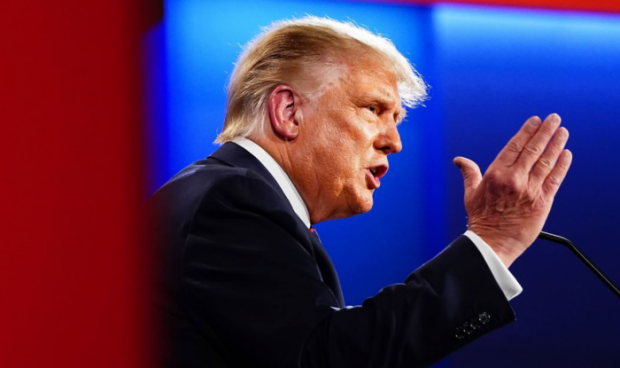 A New York Times (Lean Left) report released this week details President Donald Trump's financial history and tax information, alleging that Trump paid little to no income tax in the last 15 years. Trump denied the report, saying he would release his tax information when the IRS finished its audits. The report was released two days ahead of the first presidential debate, during which Trump and Biden sparred about the report, the coronavirus, the economy and other major topics.

Media coverage of the debate from all sides focused on its erratic nature, and moderator Chris Wallace's struggles to maintain order. Some right-rated voices and analyses painted Trump as the winner, and some left-rated voices framed Biden as the victor.

On the Times' report, some right-rated voices criticized the Times for purported bias, and said the financial records appear normal for a businessperson who has multiple large assets. Some left-rated voices framed Trump's financial history as a reflection on his character, saying he is dishonest, manipulative and has shady business connections.

On the Blog: To some, the debate was the loudest “nothing” in American political history. What happens when the debate turns into a debacle?; and renewable energy, fossil fuels and the Green New Deal, oh my! Where do Trump and Biden stand on environmental policy?

More from AllSides: Version 3 of our Media Bias Chart is here! Check out recent changes and see where your favorite outlets fall on the political spectrum; AllSides created a 2020 election Facts and Fact Checking page, where you can see the latest fact checks on the November election; you can also now support our work and mission by becoming a sustaining member of AllSides. Sustaining memberships allow you to read AllSides ad-free.

"While Mr. Trump’s taxes might provoke outrage—how can someone who appears so wealthy pay so little?—attempting to prevent such outcomes without causing collateral damage can be tricky. Some features of the tax code that drove down the president’s tax obligations exist for valid reasons. For example, the law lets businesses use losses from some years to offset profits in other years so that tax payments are smoothed across the ups and downs of the business cycle."

"President Donald Trump and former Vice President Joe Biden met on the debate stage for the first time and stretched or mangled facts on several topics. Trump exaggerated instances of election “fraud,” misleadingly citing ballots “found … in creeks” and a case where a thousand voters were mistakenly sent two ballots. Neither is evidence of “fraud.” Biden got it wrong when he claimed there was “15% less violence” during his time in office than today. The violent crime rate dropped under Trump.""

"The tax returns that Mr. Trump has long fought to keep private tell a story fundamentally different from the one he has sold to the American public. His reports to the I.R.S. portray a businessman who takes in hundreds of millions of dollars a year yet racks up chronic losses that he aggressively employs to avoid paying taxes. Now, with his financial challenges mounting, the records show that he depends more and more on making money from businesses that put him in potential and often direct conflict of interest with his job as president."

"Sixty percent of respondents in CNN’s real poll thought that former vice president Joe Biden won the debate. Only 28 percent thought that Trump did. CNN had asked its respondents before the debate whom they expected to win. Biden had the advantage there, too, by 13 points. Tellingly, Trump was far less likely to have been declared the winner than respondents expected, across party groups. Nearly 9 in 10 Republicans expected Trump to win, for example, but only about two-thirds actually did. Fully a quarter of Republicans thought Biden won, as did 1 in 8 Trump supporters."

"The New York Times report also said Trump paid no federal taxes in 10 of the last 15 years "largely because he reported losing much more money than he made." A lawyer for the Trump Organization, Alan Garten, told the outlet that "most, if not all, of the facts appear to be inaccurate" and claimed the president "has paid tens of millions of dollars in personal taxes to the federal government, including paying millions in personal taxes since announcing his candidacy in 2015.".... The New York Times said Garten asked for the documents on which the report was based, but the outlet said it declined in order to protect its sources."

Chris Wallace Faces Intense Backlash, Including From Colleagues, Over Bias During Debate