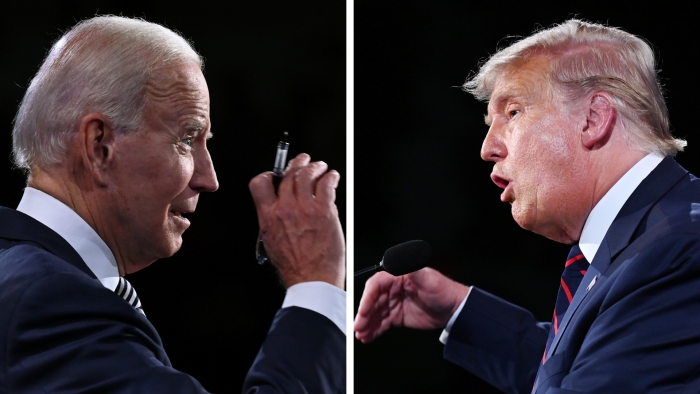 One, from Telemundo, had Trump winning by a 2-to-1 margin, he said. Another, from WGN, had a similarly lopsided result.

“Early reviews, instant response, instant polls,” Hannity said. “I’m sure the, you know, the mainstream media will have corrupt polls, as they always do, but those are the two flash polls that we have already.”

The press secretary Trump formally employs made a...

For four years, Facebook has promised to curb the spread of disinformation, but new data shows that it has failed miserably Its most recent challenge was...

The New York Post’s front-page article about Hunter Biden on Wednesday was written mostly by a staff reporter who refused to put his name on it, two Post...

With an election looming and no end in sight for COVID-19, Americans admit to reading news they don...
ANALYSIS

More than 80% of Americans say they believe the spread of misinformation is a major problem this election year, yet many people frequently read articles from...

Why Social Media Is So Good at Polarizing Us
ANALYSIS

Americans are more polarized than ever—at least by some measures. A growing body of research suggests that social media is accelerating the trend, and many...

The spread of misinformation makes the search for trustworthy news that much harder. But as Tina Trinh reports, tech companies are identifying media bias and...

NBC chief White House correspondent Hallie Jackson was a grade-A fake news sprayer Thursday night, just before the debate as NBC Nightly News was the only...

NPR tells readers the Hunter Biden story is a 'waste' of time and a 'pure...

NPR managing editor Terence Samuels acknowledged Thursday that the news outlet has not been reporting on the Hunter Biden laptop story because the editorial...

Three in 4 voters think Big Tech has too much influence on political news people read, Washington...

Three out of 4 registered voters believe social media companies have too much influence over what news the public reads, according to a new poll, with a...

Joe Biden’s campaign announced another “lid” on Monday morning, announcing their candidate would avoid all contact with reporters for four entire days leading...