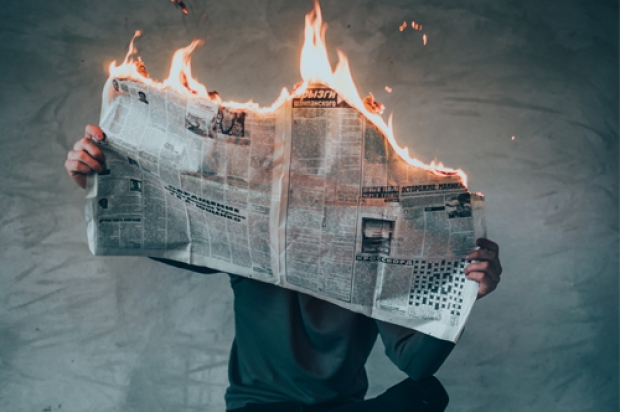 A string of violent incidents in October further illuminated political polarization in America, raising serious concerns about how media bias contributes to hateful division — and how we must change this to heal our divide.

Many of the suspects had a penchant for posting extremely biased views on social media. Robert Bowers, the Pittsburgh suspect, reportedly declared “Jews are the children of Satan” in his online profile. Cesar Altieri Sayoc Jr., who was arrested in the pipe bomb case, regularly posted conspiracy theories, such as captions reading, “Clinton busted exposed rigging entire election,” as well as outright threats to Democratic figures.

Lest you get the wrong idea, extreme bias is not specific to any political ideology. James T. Hodgkinson, who shot a Republican member of Congress while he practiced for a Congressional baseball game in 2017, also expressed highly polarized political views online. He wrote at one point that it was “time to destroy Trump & Co.” and belonged to a group titled, “Terminate the Republican Party.”

Extremely biased views are often nurtured online — and can spill over into real-world violence. This is because the Internet employs a type of media bias that obscures different perspectives, making us less tolerant of other people.

Most online technologies, from social media to search engines, gather information about us — our likes, dislikes, geographical location, political leanings, and more. When we log on, we’re shown either the most popular perspectives or the perspectives that most suit our profile. This media bias reduces our ability to see various perspectives and appreciate nuance.

AllSides recently revealed data showing Google News results are biased. The vast majority of results — 65% — point to Left or Left-Leaning media outlets. Google is likely showcasing information based on popularity, but what’s popular isn’t always what’s right. While there’s no evidence it’s intentional or rigged, Google does seem to play a role in media bias and political polarization among Americans.

Media bias leads people to think uncritically about the content they are consuming and prevents them from having a balanced worldview. This fuels extremism and hatred. Media bias will continue to blind us from seeing the other side unless we consciously seek out alternative opinions — or our technologies change.

Some believe social media sites need to crack down on extremist views. But censoring perspectives we disagree with only marginalizes people, making them feel even more of a desire to be heard — maybe even using violence to do so. And keeping people in filter bubbles that reinforce their views doesn’t help, either — it may generate clicks, but we need to think beyond bottom lines if we want to heal our divide.

At AllSides, we believe the solution is not to shut down speech, but to provide technology that breaks through media bias and exposes people to all sides of an argument so they can truly decide for themselves.

As November midterm elections rapidly approach, many partisan groups are vying for your support, hoping to ensure their "team" wins — but countries with high levels of polarization and media bias are less able to come together to solve real problems.

We’re creating technology that empowers us to better understand one another. A less polarized world is a healed world. Will you join us?

Julie Mastrine is the Director of Marketing at AllSides. View our balanced news and media bias ratings.