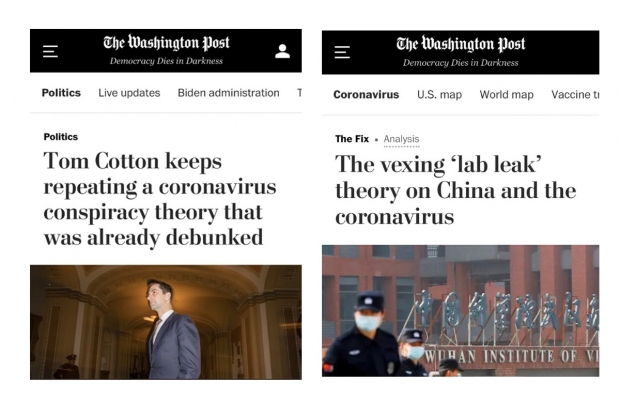 This week, the media sphere has been abuzz with news stories highlighting how the theory that COVID-19 emerged from a Chinese laboratory is now plausible — and as a result, many have pointed out apparent media bias.

Many journalists who had previously run headlines painting such an inquiry as a “conspiracy theory” or “debunked” now appeared to be changing their tune, treating the lab leak origin theory as suddenly plausible.

Several developments gave the theory renewed attention, including a letter published in the journal Science by 18 prominent scientists calling for a deeper investigation and pointing to a lack of conclusive evidence for any particular origin. The theory gained further traction following reports of a declassified intelligence report discussing three Wuhan Institute of Virology scientists who were hospitalized with symptoms consistent with COVID-19 in November 2019, a month before the first reported case in China.

From the Washington Post to the New York Times to Politifact to Facebook, media and tech giants that were previously in unison against the lab leak theory now appeared to be giving it credibility.

Facebook, for instance, announced Wednesday that posts pushing the hypothesis that COVID-19 is man-made will no longer be banned on the platform.

The Washington Post (Lean Left) early on ran a headline chastising Sen. Tom Cotton for “repeating a conspiracy theory that was already debunked” — a headline the senator pushed back on via Twitter (see here and below). Showing a shift, this week the Post ran the headline “Timeline: How the Wuhan lab-leak theory suddenly became credible.” BBC (Center) and Fortune (Center) also ran stories that illustrated this shift.

1. Natural (still the most likely, but almost certainly not from the Wuhan food market)

3. Bad science, bad safety (this is the engineered-bioweapon hypothesis, with an accidental breach)

Again, none of these are “theories” and certainly not “conspiracy theories.” They are hypotheses that ought to be studied in light of the evidence, if the Chinese Communist Party would provide it.

“The idea that [the virus] emerged from the Wuhan Institute of Virology (WIV) — once dismissed as a ridiculous conspiracy theory — has gained new credence,” the Post writes.

The Washington Post also ran a headline this week calling the theory “vexing” — a departure from its previous qualifier of “debunked.” 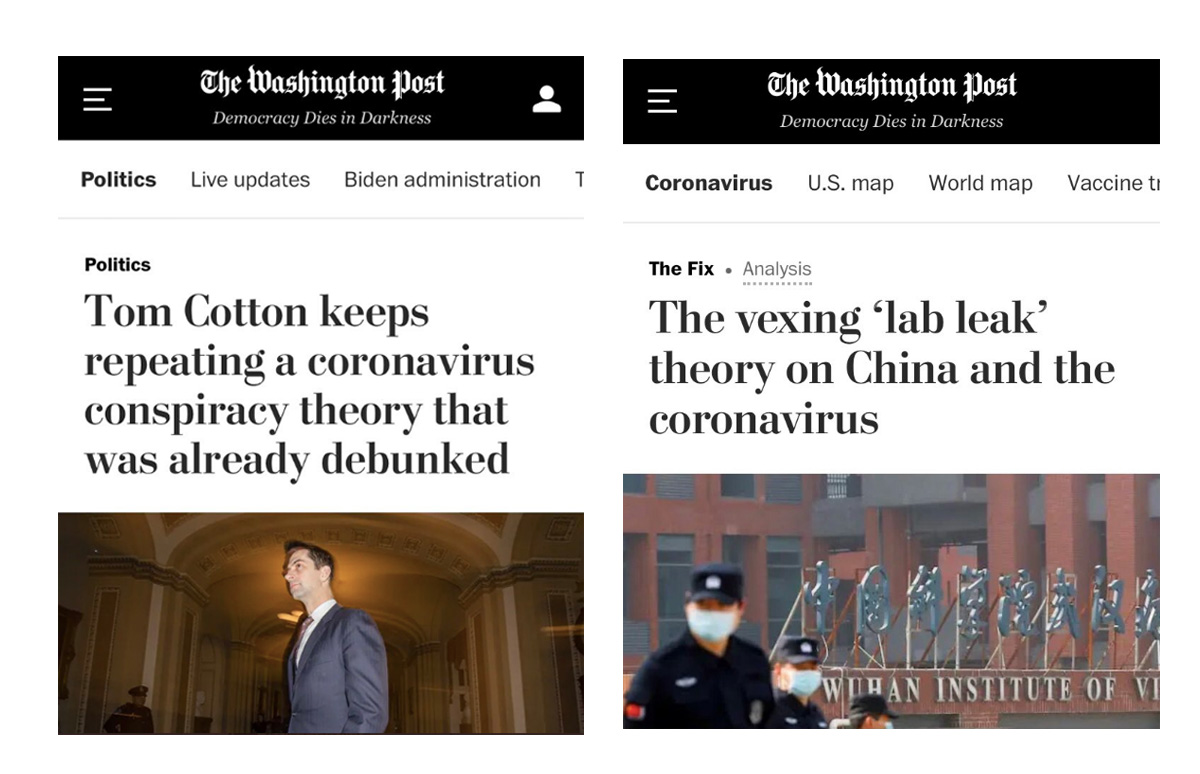 Some, such as freelance journalist Drew Holden (not rated) and Media Research Center (Right bias), argued a media bias against Trump led journalists to dismiss a theory that deserved further investigation.

CNN (Left bias) interviewed New York Times correspondent Maggie Haberman this week, who said the Trump administration’s purported lack of “credibility” was the reason people did not take the theory seriously last year. Some, such as Holden, juxtaposed this to a 2020 CNN story that featured Chinese officials arguing the lab leak theory was “a political strategy for Republicans ahead of the 2020 presidential election” (others argued this example is cherry-picked, pointing out that many outlets did and still report on China disputing origins of the virus).

“We urge the US to stop spreading disinformation."

China says recent accusations by the Trump administration that the Covid-19 pandemic originated in a lab in Wuhan are a political strategy for Republicans ahead of the 2020 presidential election. https://t.co/noJa7g8n9f

Politifact (Lean Left) was also in the spotlight this week for archiving a previous fact check that read, “The genetic structure of the novel coronavirus rules out laboratory manipulation.”

On May 17, Politifact issued an Editor's Note that stated:

“When this fact-check was first published in September 2020, PolitiFact’s sources included researchers who asserted the SARS-CoV-2 virus could not have been manipulated. That assertion is now more widely disputed. For that reason, we are removing this fact-check from our database pending a more thorough review. Currently, we consider the claim to be unsupported by evidence and in dispute. The original fact-check in its entirety is preserved below for transparency and archival purposes.”

Looking at the Washington Post’s timeline, the theory has a long history of dispute. It seems the media based the "deunked" qualifer on a statement published in Lancet in Feb. 2020 by a group of 27 scientists saying a lab origin was a conspiracy. But it was just about over a month later when others, such as researcher Milton Leitenberg, said the theory shouldn’t be dismissed. The timeline shows a lot of back-and-forth on the theory from many places.

Holden compiled a thread in which he compared coverage from major left- and center- rated media outlets on the lab leak theory in 2020 versus now:

You may remember that much of the really bad coverage was focused on @SenTomCotton’s suggestion that we better understand the potential for a lab leak from Wuhan.

The difference in framing here from @nytimes between May 2020 and May 2021 is...stark. pic.twitter.com/dr5kPPbq3a

But it wasn’t just NYT. There’s a lot of ammo from @CNN, too.

Not even two months ago, they ran a piece writing off the lab leak theory as “like something out of a comic book.”

Yesterday, the tone had changed, without any reference to their own role in the previous debate. pic.twitter.com/O2VMNayPuN

And for some reason @washingtonpost’s timeline of events just so happens to omit their own “fact check” of the lab leak theory from April 2020 that concluded “the balance of the scientific evidence strongly suggests the conclusion that the new coronavirus emerged from nature.” pic.twitter.com/eP4RmJ6mAL

So, is the shift in narrative a clear display of media bias, or just the natural evolution of a story in which new information has emerged?

We had an internal discussion about this at AllSides.

A team member with a Lean Left bias warned against posting headline comparisons without context, saying that the change in media attitudes “could be because of a shift in the scientific consensus, not in the journalists' perspective. It could also be that the scientific consensus didn't change, in which case the media changed the narrative on its own; we owe it to our readers to separate truth from speculation. Science responds to evidence as it comes to light, and changes its understanding when the evidence changes. This is necessary context to make a judgement on this case, and providing comparisons without context merely confirms the biases of people who are already primed to think the media is fake news.”

On the other hand, a team member with a Lean Right perspective argued it is a case of clear media bias, saying that “just because a group of scientists said something early on, it doesn’t mean journalists should stop asking questions. That's the whole point of being a journalist. There was enough uncertainty across the board early on to make it premature for journalists to say it had been roundly ‘debunked.’ But journalists increasingly frame scientists as all-knowing gods whose assertions are gospel, so it makes sense they used a letter from 27 scientists as fodder to paint anyone asking questions as a conspiracy theorist — especially since Trump was one of those making the inquiry.”

Others on the right pointed out that the media’s belief that Trump was being racist against Asians for calling it the “China virus” may have caused journalists to ignore any inquiry he raised about China being responsible for releasing the virus; they said this was anti-Trump bias on journalists' part, because other viruses, such as Zika virus and Ebola virus, were referred to by their country of origin without claims of racism being made.