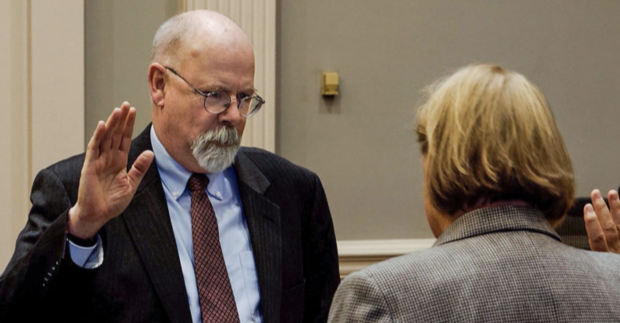 Credit: U.S. Attorney’s Office for the District of Connecticut

Special Counsel John Durham was appointed in 2019 to uncover any potential wrongdoing by government officials investigating Russia’s interference in the 2016 election. More than two years in, developments from Durham’s probe continue to lead to media bias and a divide over Donald Trump and Hillary Clinton.

One of three people indicted by Durham since the start of his investigation is cybersecurity lawyer Michael Sussmann, who was charged in September for lying to the FBI about not representing "any client" during a 2016 meeting about possible links between Russia and Donald Trump.

Last week, in a filing from Durham asking a judge to evaluate any potential conflicts of interest, the investigator accused tech executive Rodney Joffe of exploiting his access to private White House data "for the purpose of gathering derogatory information" on Trump and fueling Sussmann’s collusion claims. Sussmann has connections to the Democratic Party and previously served as a lawyer on Hillary Clinton’s campaign for the 2016 election.

Many outlets across the political spectrum said that Durham’s probe implied that Hillary Clinton's campaign paid to spy on Trump White House servers. Meanwhile, Durham said that “he wasn’t trying to inflame partisanship and media commentary.”

“If third parties or members of the media have overstated, understated, or otherwise misinterpreted facts contained in the Government’s Motion, that does not in any way undermine the valid reasons for the Government’s inclusion of this information,” Durham’s team wrote in a court filing last week.

Sussmann is expected to stand trial sometime between mid-May and early June, according to a federal judge. Durham has not yet convicted Sussmann of any wrongdoing, but many outlets have already jumped to a wide range of conclusions. Here’s how:

Reactions From The Left

The Durham probe was covered far less by left-and center-rated outlets. Those that did report on it often downplayed the purported Clinton connection, with some calling it “crazed” or “paranoid.”

Some outlets such as The New York Times (Lean Left bias) emphasized how Durham “distanced himself” from “false reports by right-wing news outlets.” The article claimed Durham’s filing did not mention any revelation that “the Clinton campaign had paid Joffe’s company to spy on Mr. Trump,” contrary to the narrative being prominently featured by right-rated outlets.

Filed under the topic “Conspiracy Theories,” one Vanity Fair (Lean Left bias) writer claimed that the “deranged conservatives” who are convinced Clinton spied on Trump during his presidency are “mortifyingly incorrect.” She emphasized how Sussmann’s conversation in the FBI was already reported on last fall and that Durham’s filing “never said the White House data that came under scrutiny was from the Trump era” — but during the Obama presidency.

“What Trump and some news outlets are saying is wrong,” attorneys Jody Westby and Mark Rasch told The New York Times (Lean Left bias). “The cybersecurity researchers were investigating malware in the White House, not spying on the Trump campaign, and to our knowledge all of the data they used was nonprivate DNS data from before Trump took office.”

Michael Tomasky, editor of The New Republic (Left bias) argued that “it’s time for John Durham to shut down his sham investigation” as he’s only “snared three small fish.” He accused Durham of “fudging facts that aren’t exactly suggestive of a grand conspiracy.” The Republican Party is “led by a neofascist [and] is openly against democracy,”according to Tomansky,“...and is using Durham “as its instrument.”

CNN Business (Lean Left bias) stated that Durham’s probe is “much less newsworthy” than the “explosion of false claims that have ricocheted from it.” According to CNN Business, this shows, “how any piece of information that “supports the ‘hoax’ hypothesis or the idea that Trump was right when he said he’d been spied on, no matter how irrelevant or incomplete, is turned into a big story.”

Reactions From The Right

Durham’s probe is consistently a bigger story on the right than on the left.

Many right-rated opinion voices are seemingly convinced that Clinton’s campaign lawyers paid Sussmann to access Trump’s servers in order to establish evidence of collusion between Trump and Russia. There are some right-rated outlets that are reporting this claim as a fact.

National Review (Right bias) said Sussmann’s prosecution was “pretty standard fare” as, “there is no false statement as a matter of law because…Durham can’t prove that the alleged lie to the FBI was material.” The author also characterized Sussmann as “a big-cheese former DOJ cybersecurity official with big-cheese political connections,” who  “didn’t file his information through “regular FBI channels.”

Responding to the Durham probe, Clinton tweeted that “Trump and Fox are desperately spinning up a fake scandal to distract from his real ones.” Breitbart News (Right bias) responded, calling the tweet “a classic misdirection play, one that mirrors the political scandal itself.”

Right-rated outlets have also criticized mainstream journalists for not covering the purported revelation.

Holman W. Jenkins Jr., a member of The Wall Street Journal editorial board (Lean Right bias), highlighted the “irony of the press carping” about Durham’s probe. More specifically, he argued that the press and FBI can’t counter the “colossal burden” of Durham’s revelations and that they “let themselves be manipulated [into promoting] one of the biggest partisan lies in American history.”

“My guess has been that [Durham is] less interested in racking up convictions than in exposing how the press and FBI participated in their own gaslighting for partisan ends,” Jenkins Jr. said.

Fox News (Right bias) highlighted how Democrats are “trashing” Durham’s probe as a “politically motivated investigation.” They also emphasized the “potential conflicts of interest” at play, most notably that “Clinton campaign lawyers worked with a tech company to access Trump servers.”

Some right-rated outlets are also highlighting how Big Tech companies are censoring Republicans who are speaking out about the Durham findings.

Washington Times (Lean Right bias) reported that Facebook flagged a post with “false information” from a North Carolina congressman that wrote, “the Clinton campaign reportedly paid to spy on President Trump to initiate an investigation that wasted millions of tax dollars.” The article also stated that the “slow” turnout of reports on Durham’s filing suggests “there was an organized Democratic effort to foster the Trump-Russia collusion theory that dominated headlines throughout Donald Trump’s presidency.”

Rebekah Koffler, author of  “Putin’s Playbook: Russia’s Secret Plan to Defeat America,” went as far as to argue in New York Post — Opinion (Right bias) that the “Durham report proves Hillary Clinton — not Trump — was Putin’s puppet.” Clinton’s “objective of casting Trump’s presidency as illegitimate,” made Clinton and others on the left “soldiers in Putin’s war on America.”

From Durham’s perspective, it’s understandable — if not admirable — that the man tasked with conducting a thorough investigation wanted to see if Sussmann had any conflicts of interest given his connection to the Clinton campaign.

But nowhere in the report does Durham’s team suggest the following:

If the Durham case closes where it is today, it will have produced no sufficient evidence that Clinton was spying on the Trump administration during or after the election. However, even the analyses and fact checks that move to dismiss the Clinton link acknowledge that there are still some ambiguous elements to this case.

There very well may be more revealing information that comes to the surface, or not. Biased media outlets on both sides of the aisle want to see this as an objective issue when no conclusion about the accusations against Clinton has been reached. We should wait and let Durham appear in court this spring before jumping to any conclusions.

Many news outlets jumped the gun, muddling the conversation around the Durham probe. This is a great example of why it’s so important to read news across the political spectrum and to become aware of media bias.

Only by consuming an unbiased, balanced news diet can you be sure you are getting the full story. Use AllSides’ balanced newsfeed, Media Bias Ratings and guide to How to Spot Types of Media Bias to get the full picture and think for yourself.