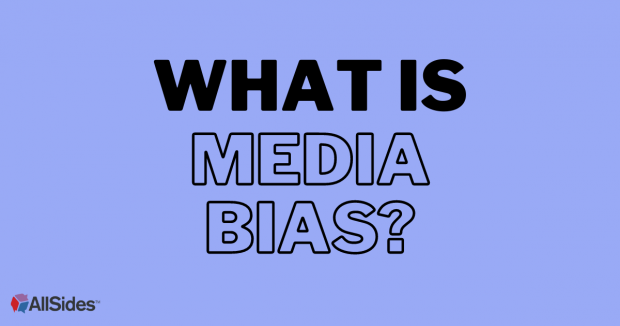 What is media bias? What is the definition of media bias, and what does it mean to be biased?

AllSides' definition of media bias and general bias is as follows:

Media Bias — noun. The tendency of news media to report in a way that reinforces a viewpoint, worldview, preference, political ideology, corporate or financial interests, moral framework, or policy inclination, instead of reporting in an objective way (simply describing the facts). A media outlet may reveal bias in how it reports specific news stories or which stories they choose to cover, ie., deem more important than others to cover or emphasize. 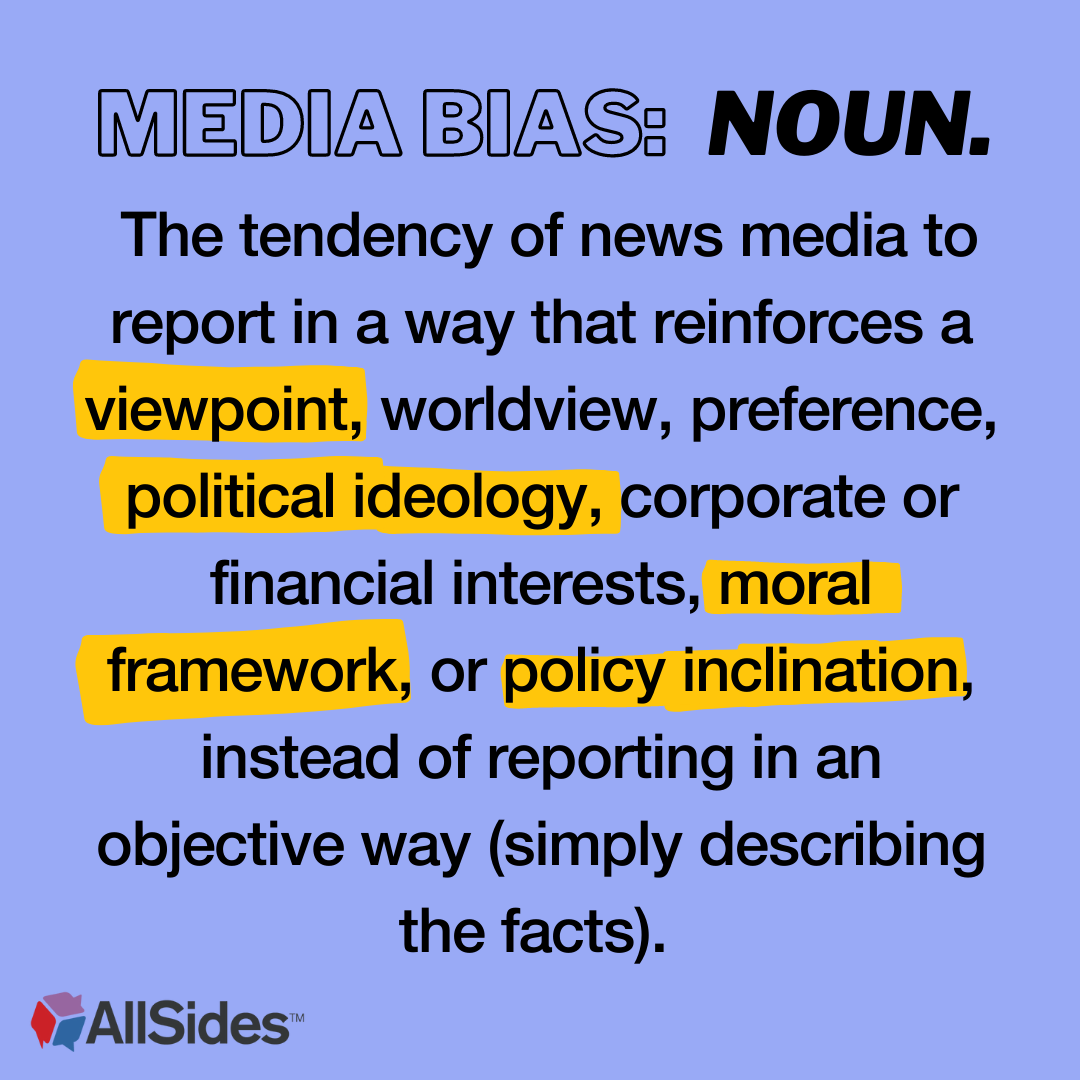 There are numerous ways media bias manifests, which we outline in our guide to Types of Media Bias and How to Spot Them. It includes slant, spin, sensationalism, story choice, word choice, and use of adjectives. Media bias manifests in the selection of news stories (what the editors find most relevant or important) and how they are covered.

Is Media Bias a Bad Thing?

You may notice that in some dictionaries, a negative touch is added to definitions of bias. Dictionary.com, for instance, defines bias as a particular tendency, trend, inclination, feeling, or opinion, especially one that is preconceived or unreasoned. The American Heritage® Dictionary of the English Language, 5th Edition, describes it as a preference or an inclination, especially one that inhibits impartial judgment.

In both of these cases, bias is characterized as a bad thing (inhibiting judgment, being unreasoned). But is it?

There is a difference in how people view the words “biased” and “unbiased.”  As we showcase in the AllSides Red Blue Translator, different people can have very different perceptions and reactions to the exact same words or phrases. Learning about those differences can help us to better understand.

In one view, bias is largely seen as something negative. Thus, the opposite word, “unbiased,” is often synonymous with something seen as positive — "objective" and "neutral." Out of this view, accusations of political bias are often made to attack various news networks or others who assert they are objective or neutral.

Another perspective some have is that everyone is biased — and that’s okay, and maybe even desirable.

Some sort of standpoint or bias is an inherent and innate feature of the human mind — something that literally cannot be "escaped" or "shelved." Preferences, inclinations, and partialities help us to filter information, order our psyches and navigate the world. 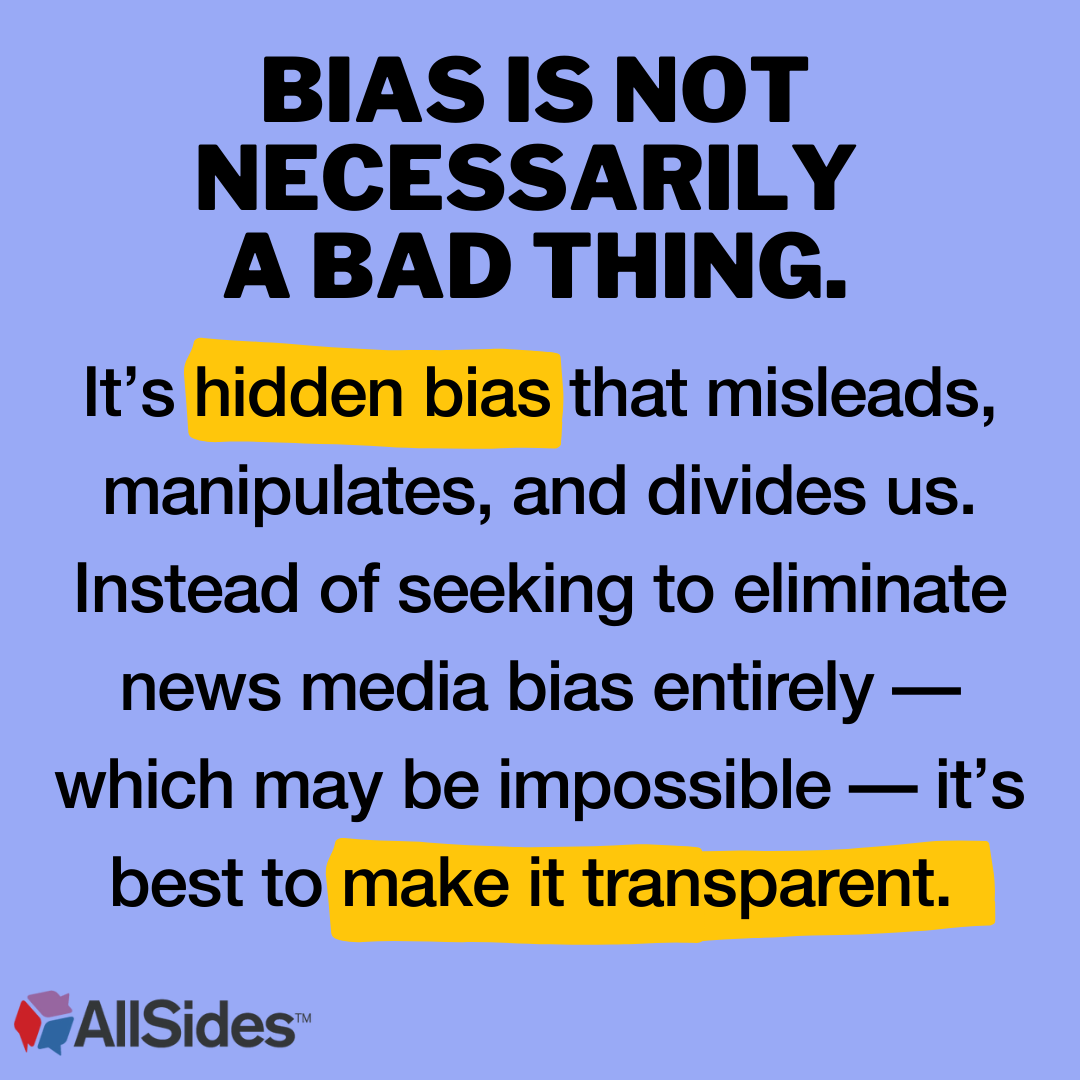 Is Unbiased Media a Good Thing?

Reporting objectively, in an unbiased manner, is generally considered to be a good thing. But is being unbiased always a good thing, or even possible?

It’s certainly important for journalists to do their best to provide a balanced view, to gather perspectives across the political spectrum, to become aware of different worldviews, and to avoid the types of media bias outlined in our guide. Still, reporters are finite beings — their time, attention, and resources are limited. They will always have to make some subjective decisions — which voices to include, which stories to highlight above the fold, which stories to report on at all. It’s impossible for a journalist to know all things, report on all things, be present in all places, or interview every single person on an important topic.

A roll of the dice would give completely unbiased results, but that is no way to effectively make decisions around important issues or questions. We all have to assign value judgments, or weigh some things as more important or less important than others. In addition, we are all biased by what we know, what we don’t know, and our life experiences, which affect our output and how we approach the world.

Designating a media source as “unbiased” can also be a way to hide bias, give undue credibility to one perspective, or hush criticism, debate and dialogue. A source may be designated as unbiased but not really be; it can still wash over nuance and interfere with objectivity, scientific inquiry, and discovering the truth or reality of something. It can prevent better understanding.

Unbiased news that accurately, evenly, and fairly represents multiple perspectives on contentious issues is a good thing. We believe biased news given from a conservative or liberal perspective is also an important part of the media landscape, as long as the outlet makes its bias transparent. The importance of making media bias transparent is why we developed the AllSides Balanced Newsfeed.

To understand what media bias is, it’s first crucial to understand the difference between something that is objective versus subjective.

News media bias often means the reporter has inserted subjective analyses or statements into the reporting. Or, it can mean they exercised subjective judgment in what to cover and how to do it.

Here is a quick rundown of subjectivity versus objectivity:

The World Health Organization is the world’s best hope for fighting pandemics.

Our leaders are cowards when we need them to be brave.

Our justice system is a blight on our nation and makes a mockery of our ideals.

Objective statements or language: Reflects that which is directly observable — things you can see, count, or otherwise observe or prove. Does not vary, have a viewpoint, or infer value/moral judgments.

The stepmother of a former Atlanta police officer was fired from her job.

U.S. traffic has rebounded to about 90 percent of pre-pandemic levels as states lift more restrictions.

More than 30 healthcare workers in the city died after contracting the virus.

A subjective statement is based on personal opinions, assumptions, beliefs, tastes, preferences, judgments, or interpretations. It is a statement colored by the writer’s specific perspective, lens, and values and cannot be verified using concrete facts or that which is directly observable.

An objective statement is based on observable facts. It is not based on emotions, morality, values, political worldview, or personal opinion; it is based on empirical evidence — that which is quantifiable, observable and measurable.

*Note that a statement that is written in an objective way may not actually be true. The following statements are objective statements, but can be verified as true or false:

The Burj Khalifa is the world's tallest building.

The first statement is true (as of this writing); the other two are false. It is possible to verify the height of buildings and determine that the Burj Khalifa tops them all. It is possible to devise an experiment to demonstrate that five plus four does not equal ten using established criteria. It is also possible to observe that giant glaciers do not dominate North America.

Bias is not necessarily a bad thing — it’s hidden bias that misleads, manipulates, and divides us. Instead of seeking to eliminate news media bias entirely — which may be impossible — it’s best to make it transparent. AllSides does this via our balanced newsfeed showing headlines side-by-side from media outlets on the left, center, and right.

We do believe that reporters would gain more audience trust and reflect more accurate reporting if they sought to eliminate many common types of media bias from their writing. But we also know this is unlikely, as current news media business models incentivize outlets to keep catering to one side. The AllSides balanced newsfeed and media bias ratings make political bias transparent, so that people can get the full picture and think for themselves.

Multiple perspectives can combat the downfalls of bias. Instead of pretending biases do not exist or treating them only as negative, an alternative way to seek fairness and objectivity is to allow multiple voices and ideas to be shared and explored in an open, transparent way. This allows for an exploration or discussion as to what informs the bias and allows people to decide for themselves and find the truth, instead of being manipulated into one way of thinking, one worldview, or support for a specific political policy.

AllSides Media Bias Ratings™ reflect the subjective judgment of Americans across the nation. Different individuals may define bias a bit differently, or define left and right a bit differently. Our system is designed to reflect Americans’ overall judgment to provide the most trustworthy ratings.

With the problems associated with media bias, there are a few things we can do:

1) Provide multiple perspectives on news and issues to empower the reader. Providing different perspectives in a respectful manner, with a tone of understanding and curiosity rather than accusation or shame, helps people get out of their one-sided filter bubbles and to understand a story or issue better, be persuaded, or perhaps simply better appreciate others with different perspectives.

2) Strengthen our media literacy skills. By becoming aware of the existence of media bias and learning how to spot it, we can know when the information we are getting is subjective opinion or objective fact. This can help us to think clearly and prevent being unfairly manipulated one way or the other.

Julie Mastrine is the Director of Marketing and Media Bias Ratings for AllSides. She has a Lean Right bias.