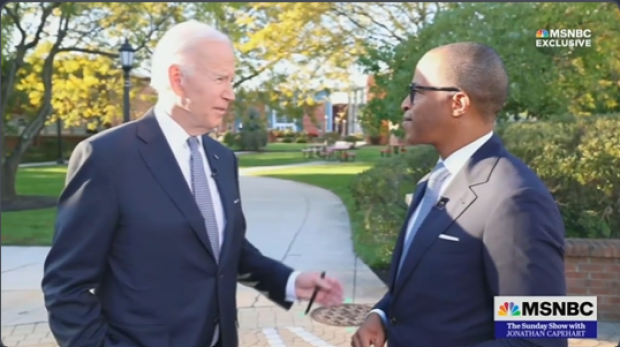 President Biden was interviewed on MSNBC’s (Left bias) “The Sunday Show” which aired on October 21, 2022, where he spoke about concerns from voters regarding his age.

What the Left Reported
What the Right Reported

MSNBC anchor Jonathan Capehart asked Biden in the interview, “My Aunt Gloria…When I asked her if you should run for election, still, she loves you, but she said she is not sure that you should, given your age…convince Aunt Gloria that she should stick with you.”

Biden: “Well, I think Aunt Gloria should take a look. I think it’s a legitimate thing to be concerned about anyone’s age, including mine. That’s totally legitimate. But I think the best way to make the judgment is to, you know, watch me. Am I slowing up? Do I have the same pace?

…I'm a great respecter of fate. I could get a disease tomorrow. I could, you know, drop dead tomorrow

But in terms of my energy level, in terms of how much I am able to do, I think people should look and see, does he still have the same passion for what he is doing? If they think I do, then it is fine. If not, they should vote against me.”

Biden added, “I think Aunt Gloria should just take a real, hard look. And if she concludes I am missing a beat, then she should, you know, support some other Democrat if they decide to run. But Jonathan, right now, knock on wood. I don’t want to jinx myself. I am in good health. Everything physically about me is still functioning well, and mentally too. But I understand people wanna ask that question.”

The Washington Examiner said [emphasis ours]  “President Joe Biden conceded it is ’legitimate’ for people to be worried about age.” Using the word “conceded” implies that Biden denied his age was an issue in the past and was forced to admit that concerns were founded. The New York Post also used the word conceded. Similarly, the Epoch Times and Fox News said that Biden “admitted” his age was a concern for voters.

The Examiner report continued; “Despite a wave of viral clips showing gaffes becoming a regular occurrence during his tenure and physical slips, such as when he [Biden] fell off a bike…He also acknowledged how quickly an older individual like himself could suddenly get seriously ill.”

The article then quoted Biden saying he is a “great respecter of fate” and could “drop dead tomorrow.” When the Examiner said he was referencing “older individuals like himself” it was an instance of mind reading, because Biden did not make reference to his own age as part of that remark, and it could equally be interpreted as saying that anyone could die at any time.

In its article, The New York Post referenced Biden’s “obvious mental fog” using the subjective qualifier “obvious.” It also displayed analysis as fact when it stated that “Biden appeared to zone out” during part of the interview. The New York Post also used sensationalism when it said [emphasis ours], “Biden also took another shot at Trump’s Make America Great Again supporters, and showered praise on Rep. Liz Cheney…While touting Cheney, Biden once again slammed the MAGA movement.​”

The Epoch Times, Washington Examiner, and Daily Caller articles all mention an instance of Biden calling out for late Rep. Jackie Walorski at an event in September, despite the fact that she died in a car accident in August. Some blamed the president’s staff for potentially poor planning ahead of the event. Others, particularly in right-rated media, framed the instance as a sign of mental incompetence.

The Associated Press conveyed its bias through word choice and slant. The article said Biden “jokes” about his age in the interview and noted that “Biden went through a battery of blood, physical, gastrointestinal, dental, vision and neurological examinations shortly before his birthday last year,” emphasizing his health.

Bloomberg omitted any negative views of Biden from the article and opened by saying that [emphasis ours]: “President Joe Biden challenged voters to pick another Democrat if they have concerns about his age, while declaring himself healthy enough for a second term."

The article also quotes Biden in the interview when he mentioned that he “is in good health,” but does not mention his quote that he could “drop dead tomorrow,” or that he thinks his age is a “valid concern,” amounting to media bias by omission. The headline “Biden Tells Concerned Voters He’s in Good Health Ahead of 2024” and selective content from the interview gives an entirely different view than the interview in full. The headline makes it sound like he is contradicting those who have concerns about his health when in the interview he somewhat agrees with their concerns.

None of the reports from outlets mentioned on the left provided past examples of incidents that led voters to be concerned about Biden’s health.

To ensure you don’t miss important issues, keep up with our Media Bias Alerts. Recently, we’ve also analyzed bias in coverage of racist comments made by Democrats and Republicans and more potential federal charges against Hunter Biden.