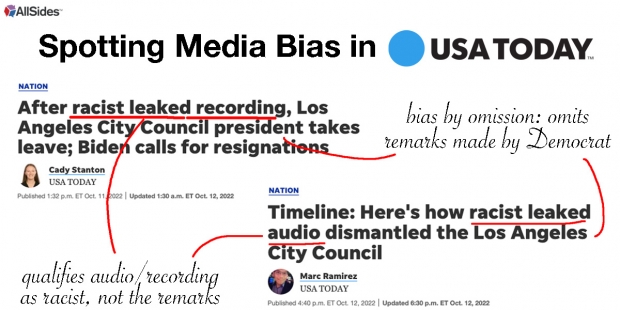 Last week, Los Angeles City Council President Nury Martinez resigned after audio leaked of her making comments some saw as racist. Meanwhile, Alabama Senator Tommy Tuberville, a Republican, was also accused of racist remarks by commenters on the left when he pushed back on Democrats’ calls for reparations.

AllSides spotted media bias by spin and bias by omission in how two news outlets on the left reported on the incidents. Media outlets typically omitted or minimized the fact that Martinez is a Democrat, while making Tuberville’s association with the Republican Party a top point in their reports. Jump to see what the politicians said or scroll on to read about the bias.

Over at The Week’s print publication (Lean Left bias for digital news; AllSides does not rate print content), reports of these two stories appeared on the very same page. Coverage of Tuberville prominently mentioned his affiliation with Republicans, while reporting on the LA incident did not mention Martinez’s association with Democrats at all. 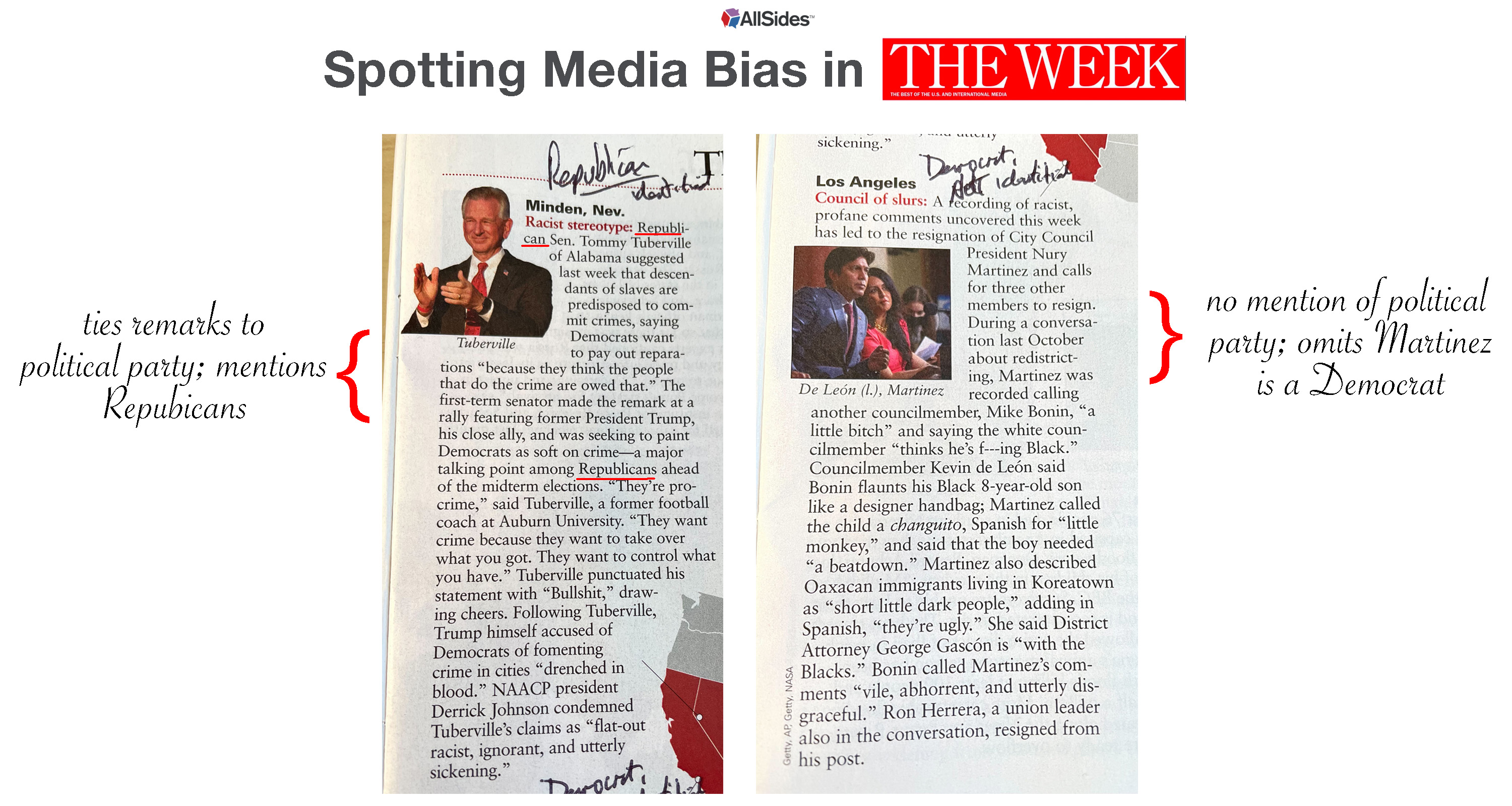 USA Today (Lean Left) was another outlet that employed different framing for each story, highlighting that Tuberville is a Republican, while not explicitly reporting that Martinez is a Democrat. Compare its headlines on the two stories below. 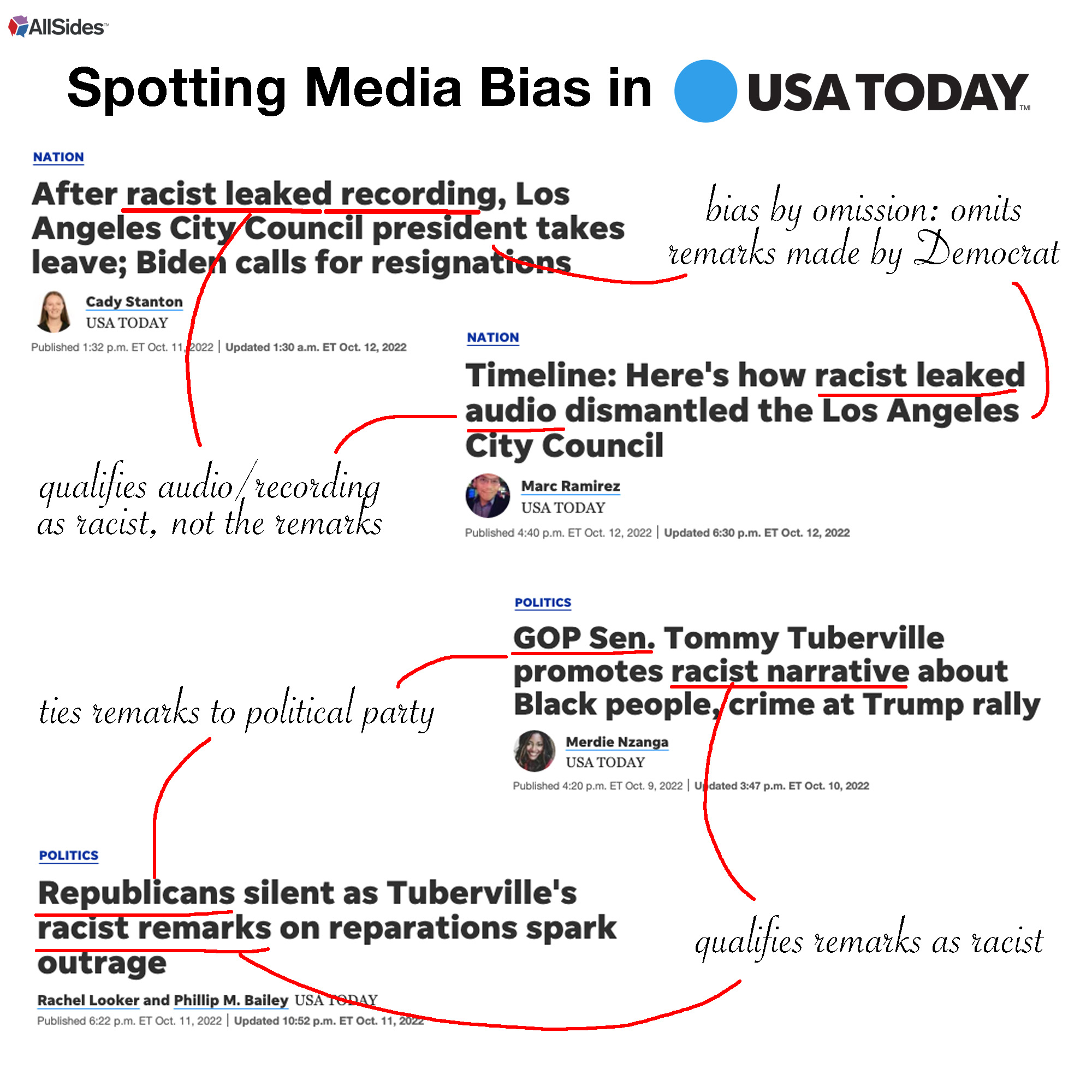 These slight framing differences may seem subtle, but serve to distance LA Democrats from the remarks. The highlighted terms are also an example of subjective qualifying adjectives — when a reporter characterizes or attributes specific properties to a noun. Reporters should generally remain neutral and not issue subjective characterizations themselves; by saying the comments are racist, the journalist indicates they agree with the critics. A neutral reporter would say stay out of it, and simply report that the remarks were called racist by others.

Meanwhile, USA Today typically omitted that Democrats were accused of the racist remarks. In one article, USA Today does not mention the Democratic Party at all until paragraph 18, despite mentioning the GOP prominently in all coverage of Tuberville. In the article, USA Today never explicitly defines Martinez as a Democrat, merely referring to her as one of “Los Angeles’ top political players.” (The LA City Council is officially nonpartisan, though individual members of the council are almost entirely members of the Democratic Party.) USA Today only ever implies Martinez’s association with the party, showcasing media bias by spin (emphasis ours):

This seemingly local issue, though, has spread like wildfire across the country and Democratic party — even reaching the White House. At a press conference Tuesday, Jean-Pierre said President Biden believes all politicians should be held accountable for racist language, including Democratic leaders who are leading one of the most liberal leaning cities in the country.

Compare with coverage of Tuberville’s remarks, in which USA Today leads with the fact that he is a member of the Republican Party, putting it right at the top of articles and in multiple headlines: "GOP Sen. Tommy Tuberville promotes racist narrative about Black people, crime at Trump rally", "Republicans silent as Tuberville's racist remarks on reparations spark outrage."

What the Politicians Said

Tuberville said Democrats are weak on crime in his speech. "They want crime because they want to take over what you've got. They want to control what you have," he said to the crowd. "They want reparations because they think that the people who do the crime are owed that."

In the case of Martinez, she spoke about the black child of white councilmember Mike Bonin in leaked audio. Two council members and the president of the Los Angeles County Federation of Labor listened in.

The Los Angeles Times (Lean Left) reported that Martinez spoke about the black child of white councilmember Mike Bonin, describing the child's behavior on a Martin Luther King Jr. Day parade float in Spanish as “like a little monkey” and saying his parents are “raising him like a little white kid.”

“I was, like, this kid needs a beatdown,” she reportedly said. “Let me take him around the corner and then I’ll bring him back.”

“I was like, I don’t know where these people are from, I don’t know what village they came (from), how they got here,” Martinez said, adding “Tan feos” — “They’re ugly.”

According to USA Today, Martinez apologized, saying her words were spoken in “a moment of intense frustration and anger.” She later resigned.

Inside AllSides: Is It Biased?

While two members of the AllSides team who lean right argued this was a clear-cut case of media bias — journalists committing bias by omission and not treating politicians the same way when they make remarks people label as racist — one team member on the left argued that in the case of the LA council, party affiliation is not necessarily relevant to the story.

They stated, “It seems to me that the main difference here is that the Republican is 1) a US Senate candidate, 2) partisan politics is prevalent in the Senate, 3) his comments were made at a Republican campaign event, and 4) comments were about Democrats. Meanwhile 5) city councils are less driven by national partisanship 6) the racist LA comments were regarding redistricting and other local issues, rather than subjects of partisan R-D debate.”

“Just because something is ‘political’ doesn't mean it's ‘partisan.’ The ‘politics’ in the LA case was between Hispanic officials and black citizens of the area, whereas the Senate candidate was explicitly trying to convince a Republican audience not to vote for Democrats.”

Some forms of bias are objective — we can easily see when reporters use qualifying adjectives or sensational words. However, bias by omission has different subjective and objective elements to it. While it can be objectively true that a fact was omitted, it is always subjective as to whether omitting that fact was a harmful bias or a justifiable choice.  Journalists will always have to make subjective choices in their reporting — that’s exactly why unbiased news doesn’t exist.

RELATED: How to Spot 16 Types of Media Bias

In two very similar stories that involved politicians making remarks some labeled as racist, USA Today and The Week seemed to omit party affiliation for one but not the other, indicating bias by omission and spin. As election coverage ramps up, be sure to check our balanced newsfeed to make sure you’re getting both sides of the story.