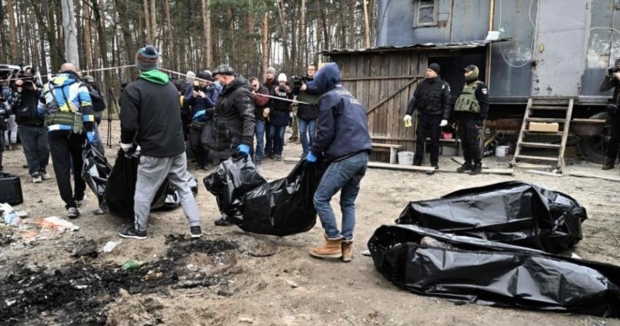 The apparently intentional killings of Ukrainian civilians by Russian troops led to new sanctions and harsh condemnations from world leaders this week.

Mass graves and dead bodies in the streets of Bucha, a suburb of Kyiv, gained international attention as Ukrainian troops retook control of the area. Ukrainian authorities reported finding over 400 dead civilians around Kyiv after Russian forces pulled out of the area, including some 200 in Bucha alone.

When addressing the U.S. Security Council on Tuesday, Ukrainian President Volodymyr Zelenskyy warned that the apparent massacre in Bucha is only one of the atrocities Russia has engaged in over the past few weeks. Citing the recent discovery of "major war crimes," the White House announced new sanctions Wednesday targeting two Russian banks and Russian President Vladimir Putin’s two adult daughters.

News sources on all sides covered the killings prominently this week. Opinions across the political spectrum condemned the killings and called for a strong response, while also framing the pursuit of war crimes charges as unrealistic. Some opinions from the right criticized the White House's focus on the war crimes allegation, accusing Biden of using it as a distraction from the U.S.'s purported incapability of mediating the conflict. Opinions from the left tend to focus less on the politics of the killings.

"Export bans worth almost $11 billion will target advanced Russian technology, including quantum computers, advanced semiconductors, and sensitive machinery and transportation equipment. Import bans worth some $6 billion will also be introduced, as will bans on certain Russian companies from public procurement in EU states."

Some Russians Believe Bucha Massacre Is Fake: 'Ukrainians Did It Themselves'

"The views of some Russian citizens align with Moscow’s narrative of the killings. Russian state media Tuesday said that some photo and video evidence of the Bucha killings were "fake." Others showed that Ukrainians were responsible for the bloodshed...However, satellite images and videos released by Western media showed the dead were left out on the streets of the city of Bucha for weeks."

"Hundreds of civilians were butchered, burned, and brazenly thrown into shallow graves or stuffed into sewers. Women were subjected to brutal gang rapes while their children were forced to watch. Men were shot in the head in front of their families. Some had their hands bound and were tortured for hours."

"On April 5, China’s ambassador to the United Nations, Zhang Jun, at a security council meeting urged restraint from all parties and end to what he called groundless accusations. Although he described the reports and images of events in Bucha “very disturbing,” Zhang failed to hold Russia accountable for the atrocities in the city, citing a lack of evidence."

"After his video appearance Tuesday at the U.N. Security Council, Ukrainian President Volodymyr Zelenskyy enumerated the killings in Bucha by Russian troops and showed graphic video of charred and decomposing bodies there and in other towns. Russian U.N. Ambassador Vassily Nebenzia dismissed them as staged."

The photos from Ukraine are horrifying. Is any justice for Putin possible?

"We can try Putin in international courts, but there is virtually no chance he will be brought to justice. And we can rightly exclaim, 'For God’s sake, how can this man remain in power?' But the bitter truth is that we will not risk a third world war to insist Russia fully retreat from all of Ukraine and purge itself of Putin."