Photographers and Ukrainian officials are reporting on bodies of dead civilians strewn in the streets of Bucha, Ukraine, sparking outrage internationally and across the political spectrum as Russia's invasion of Ukraine enters its second month.

Satellite images are also showing a mass grave at the Church of St. Andrew and Pyervozvannoho All Saints in Bucha, which is a suburb of the capital of Kyiv.  Russian troops have now withdrawn from Bucha after five weeks of firefights.

A number of Western leaders, including U.S. Secretary of State Antony Blinken, continue to call for increasing sanctions on Russia and for war crimes investigations. The United Nations Security Council is expected to consider war crimes in Bucha and other cities when it meets on Tuesday. Meanwhile, Ukraine President Volodymyr Zelenskyy says efforts are being made to restore water and electricity to Bucha, as well as to reestablish infrastructure and medical facilities. 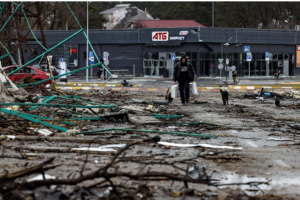 Ukrainian officials and independent photographers have reported bodies strewn in the streets of the Kyiv region city of Bucha, after Ukrainian forces retook the area following a Russian retreat to eastern Ukraine.

The big picture: Bucha Mayor Anatoly Fedoruk tweeted Saturday images of bodies with hands tied behind their backs in the city, northwest of Kyiv. "We have already buried 280 people in mass graves," he told AFP, which also captured images of bodies in Bucha's streets.

"These people were not in the military. They had no weapons. They posed no threat," Fedoruk said in his... 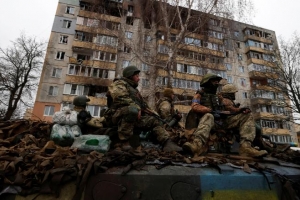 The lifeless bodies of at least 20 civilian men line a single street in the town of Bucha near the Ukrainian capital. Some lie face down on the pavement while others are collapsed on their backs, mouths open in a tragic testament to the horrors of Russian occupation.

The hands of one man are tied behind his back with a piece of white cloth. Another man lies alone, tangled up in a bicycle by a grassy bank. A third man lies in the middle of the road, near the charred remains of... 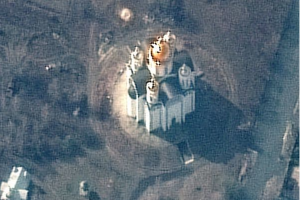 Satellite imagery released Sunday showed new information regarding a mass grave in the Ukrainian town of Bucha, a suburb of Kyiv.

The images, from Maxar Technologies, show that a mass grave is located at the Church of St. Andrew and Pyervozvannoho All Saints.

According to Maxar, the first signs of excavation of the mass grave occurred on March 10th, about two weeks after the war started. Images from March 31st show a major trench near the church. Social media footage showed dozens of dead civilians being buried in the mass grave, the company...