US and Allies Announce New Sanctions Against Russia After Bucha Killings

President Joe Biden said Wednesday that “major war crimes” were being discovered in Ukraine and that “responsible nations have to come together to hold these perpetrators accountable,” adding, “We’re going to stifle Russia’s ability to grow for years to come.” U.S. allies in the G7 and the E.U. also implemented new sanctions against Russia.

According to CNBC (Center bias), an administration official explained that “We believe that many of Putin’s assets are hidden with family members, and that’s why we’re targeting them.” The U.S. sanctions also targeted former Russian President Dmitry Medvedev, Prime Minister Mikhail Mishustin and the family of Foreign Minister Sergey Lavrov.

Coverage was widespread across the spectrum, with many headlines focusing on Putin’s daughters. Several reports across the spectrum used descriptive or sensational language like “horrific images,” “bloodbath at Bucha” and “devastating sanctions.” 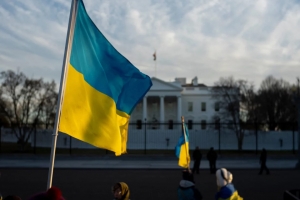 The U.S., European Union and Group of Seven nations are enacting new sanctions on Russia in response to the civilian toll reported in Bucha and elsewhere in Ukraine in recent days.

"We will document and share information on these atrocities and use all appropriate mechanisms to hold accountable those responsible," the White House said in a statement announcing the new measures. 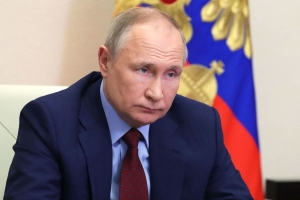 The United States on Wednesday announced it would impose a new slate of sanctions on Russia that includes first-time sanctions on the two adult daughters of Russian President Vladimir Putin.

Katerina Tikhonova and Mariya Putina, who are in their 30s, are rarely seen in public and almost never mentioned by their father. The Kremlin has only ever identified them by their first names.

“We believe that many of Putin’s assets are hidden with family members, and that’s why we’re targeting them,” said a senior administration official who spoke on background to...

Read full story
Some content from this outlet may be limited or behind a paywall.
See full media bias rating for CNBC
From the Right
303
Foreign Policy
Biden administration announces more sanctions against Russia, targets Putin's children
Washington Examiner

The White House announced a new round of sanctions against Russia on Wednesday following the weekend's bloodbath at Bucha, a Ukrainian suburb on the outskirts of Kyiv.

The sight of civilians burned, butchered, and brazenly thrown into shallow graves or stuffed into sewers triggered global outrage, a denial from Russia, and the promise of even harsher sanctions against Moscow from several Western leaders.