The highest ranking military officer in the U.S. told lawmakers Tuesday that he expects Russia's invasion of Ukraine to last years.

"I do think this is a very protracted conflict, and I think it's measured in years," said Milley during testimony before the House Armed Services Committee. He said that the U.S. and other allies of Ukraine "will be involved in this for quite some time," and warned that the "potential for significant international conflict between great powers is increasing, not decreasing." Milley expressed doubt that the invasion could have been deterred "short of the commitment of US forces into Ukraine," which he said he wouldn't have advised. In private briefings in early February, Milley reportedly told lawmakers that Ukraine's capital of Kyiv could fall in three days or less.

Most reporting across the spectrum covered Milley's comments with balance, and highlighted recent developments in the conflict and potential next steps for U.S. military aid to Ukraine. Some coverage from right-rated sources focused on contrasting Milley's recent remarks with his previous predictions about the conflict, and framed his skepticism about preventing the invasion as evidence that the Biden administration's sanctions on Russia would be largely ineffective. 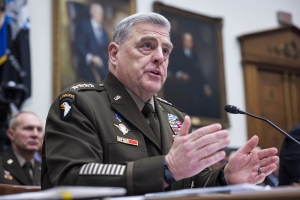 The top US military officer told lawmakers Tuesday that Russia’s invasion of Ukraine likely could not have been prevented except by the presence of US forces and warned that the conflict in Europe is likely to drag on for years to come.

Gen. Mark Milley, chairman of the Joint Chiefs of Staff, said the conquest of Ukraine had been a “long-standing objective” of Russian President Vladimir Putin.

“Candidly, short of the commitment of US forces into Ukraine proper, I am not sure he was deterrable,” Milley told the House Armed Services Committee while testifying alongside... 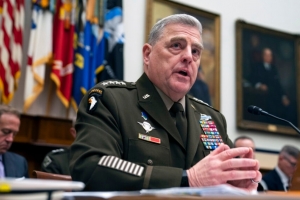 The top U.S. military officer is warning that the war in Ukraine will likely last years, raising concerns that the world "is becoming more unstable and the potential for significant international conflict between great powers is increasing, not decreasing."

During testimony in front of the House Armed Services Committee on Tuesday, Chairman of the Joint Chiefs of Staff General Mark Milley called Russia's invasion of Ukraine "the greatest threat to peace and security of Europe, and perhaps the world, in (his) 42 years of service in uniform." 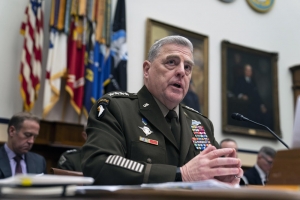 The highest ranking military officer in the U.S. said Tuesday that he expects the conflict in Ukraine to last years.

"I do think this is a very protracted conflict, and I think it's measured in years. I don't know about decade, but at least years for sure," Chairman of the Joint Chiefs of Staff General Mark Milley told the House Armed Services Committee Tuesday during testimony on the defense budget.

"This is a very extended conflict that Russia has initiated and I think that NATO, the United States, Ukraine and all of...