Facts and Fact Checking, Chuck Schumer, Democratic Party, voting rights and voter fraud
Save for Later
From The Left 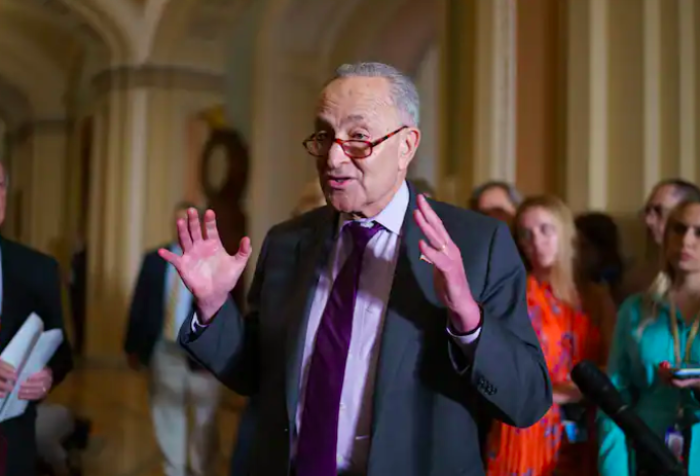 “It’s what they do in dictatorships: Manipulate the vote instead of counting it accurately. Georgia, Iowa, Montana, Florida, Alabama, Utah, Arizona, Nebraska, Oklahoma, Indiana, Kentucky, Kansas, Arkansas — this is where some of these policies that I just mentioned are now law.”

“The actions in state legislatures were totally partisan. None of these voter-suppression laws were passed with bipartisan support, not one.”

Read full story
Some content from this outlet may be limited or behind a paywall.
Facts and Fact Checking, Chuck Schumer, Democratic Party, voting rights and voter fraud

PERSPECTIVES BLOG
When California Sends a Message
NEWS
Ongoing Clinical Trials Will Decide Whether (or Not) Ivermectin Is Safe, Effective for COVID-19
FactCheck.org

A Nobel Prize and a horse dewormer: Explaining the controversy over ivermectin and COVID-19
ANALYSIS

To prevent or treat COVID-19, would you consider using a drug labeled "for oral use in horses only"?  How about one whose creation, for human beings,...

The Afghanistan withdrawal has gone poorly enough for the Biden administration, and it did itself no favors with its faulty predictions about how it...

Rating: Mixture What's True: After the remains of the final fallen soldier had been transferred from a military plane, and after the vehicles carrying the...

Ongoing Clinical Trials Will Decide Whether (or Not) Ivermectin Is Safe, Effective for COVID-19
FACT CHECK

The Food and Drug Administration has not approved the use of ivermectin, an antiparasitic medication, to treat or prevent COVID-19, the disease...

Florida Governor Ron DeSantis has continued to criticize President Joe Biden as they continue to disagree in how to deal with the ongoing...

Schumer Falsely Claims ‘All’ Americans Got Out of Afghanistan
FACT CHECK

A spokesperson for Senate Majority Leader Chuck Schumer has conceded that the New York Democrat falsely claimed that “all” Americans who wanted to leave...

Rolling Stone was forced to issue an update to their viral story about Oklahoma hospitals being overwhelmed by patients who overdosed on the drug ivermectin...

A USA Today fact check about President Joe Biden checking his watch during a dignified transfer of military remains has been amended from “partly false” to “...