Did Alexandria Ocasio-Cortez Say, ‘Children Should Be Raised by the State’? 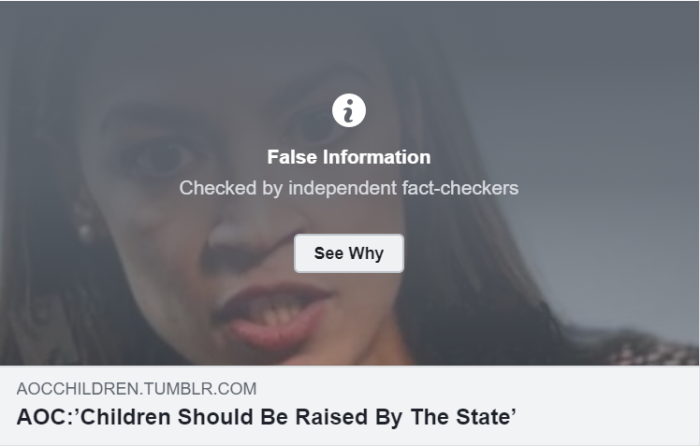 There is no evidence Ocasio-Cortez ever made such a statement. The claim stems from an article published on a satirical website.

Ocasio-Cortez, who is currently running for reelection, first took office in January 2019 and represents New York’s 14th congressional district. Since rising to national prominence, the freshman congresswoman has become a popular target for misinformation on social media.

The May 27 article, titled, “AOC: ‘Children Should Be Raised By The State,'” alleges that the freshman congresswoman wants children to be turned over to the government...

PERSPECTIVES BLOG
These Famous Political Opposites Have Been Married for Over 25 Years. How Do They Make It Work?

NEWS
How memes became a major vehicle for misinformation
Axios

Biden and his shifting goalposts on schools
FACT CHECK

How do you define success when it comes to reopening schools in the pandemic? President Joe Biden and his aides are having difficulty settling on an answer to...

There was one moment during former President Donald Trump’s most recent impeachment trial that can tell us a lot about the future of the conservative media...

This week, all eyes have been on Texas. An unprecedented winter storm left 4 million people without power across the state, and put nearly half of all Texans...

How memes became a major vehicle for misinformation

Wall Street's populist uprising, the Capitol siege and a strong U.S. anti-vaccination movement show the power of memes in spreading misinformation and...

A tweet shared on Instagram baselessly claims that a person is 300 to 900 times more likely to die “after getting the #Covid vaccine than the flu vaccine.”...