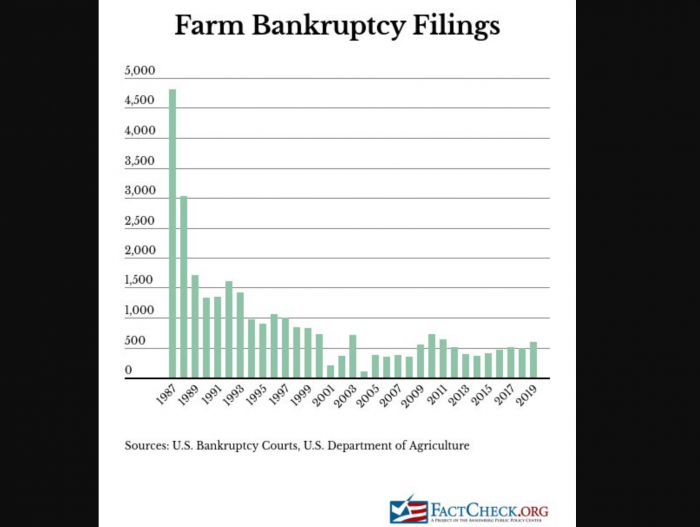 Joe Biden claimed that farm bankruptcies increased last year “due largely to Trump’s unmitigated disaster of a tariff war.” International trade was a factor, but there were additional reasons that predate the trade war — such as years of relatively weak prices, declining incomes and rising farm debt, according to agricultural economists and government reports.

“The bankruptcy wave this year has roots that go back several years,” Chad E. Hart, an associate professor of economics and crop markets specialist at Iowa State University, told us in an email.

The former vice president and presumptive Democratic presidential nominee made his remarks about farm bankruptcies at a “virtual rally in Milwaukee.” Biden, who has been staying home in Delaware during the coronavirus pandemic, spoke online to a few Wisconsin Democrats who hosted the online event.

Wisconsin has been reliably Democratic in recent presidential elections — until 2016, when Trump became the first Republican to win the state since 1984. He did so by less than 23,000 votes, making Wisconsin a key swing state in the 2020 election.

Biden criticized President Donald Trump’s handling of the pandemic, but said the president’s damage to the U.S. economy began long before the health crisis — citing Trump’s trade war with China, which began in early 2018 and resulted in retaliatory tariffs on U.S. farm products.

Biden, May 20: This crisis hit us harder and will last longer because he spent the last three years undermining the foundation of our economic strength. Farm bankruptcies jumped 20% last year due largely to Trump’s unmitigated disaster of a tariff war.

NEWS
No, Washington State is Not Building Internment Camps for the Unvaccinated
Snopes