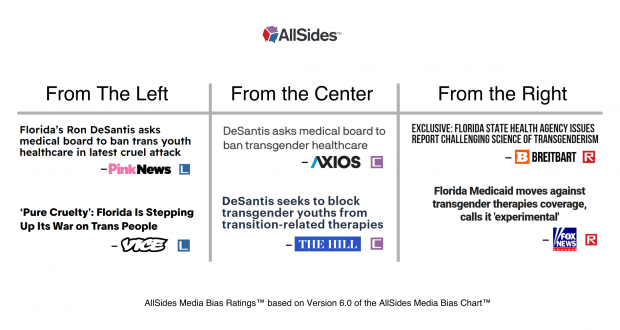 In June 2022, the Florida State Surgeon General issued a letter to the state Board of Medicine  proposing a ban on transition-related treatments for transgender minors, such as puberty blockers, cross-sex hormones, and surgeries, hours after the state released a report seeking to ban Medicaid coverage for transgender people seeking certain types treatments.

As one might expect, outlets on the left tended to cover the stories out of Florida with a negative sentiment, and vice versa. And much of it came down to the words that outlets chose to use.

Word choice bias is a type of media bias that shows us how the left and right have very different ideas about whether or not these treatments constitute care or potential harm. AllSides conducted an analysis of 11 media outlets across the political spectrum to see which words were used to describe transgender transition-related treatments in outlets on the left and right. Here’s what we found. 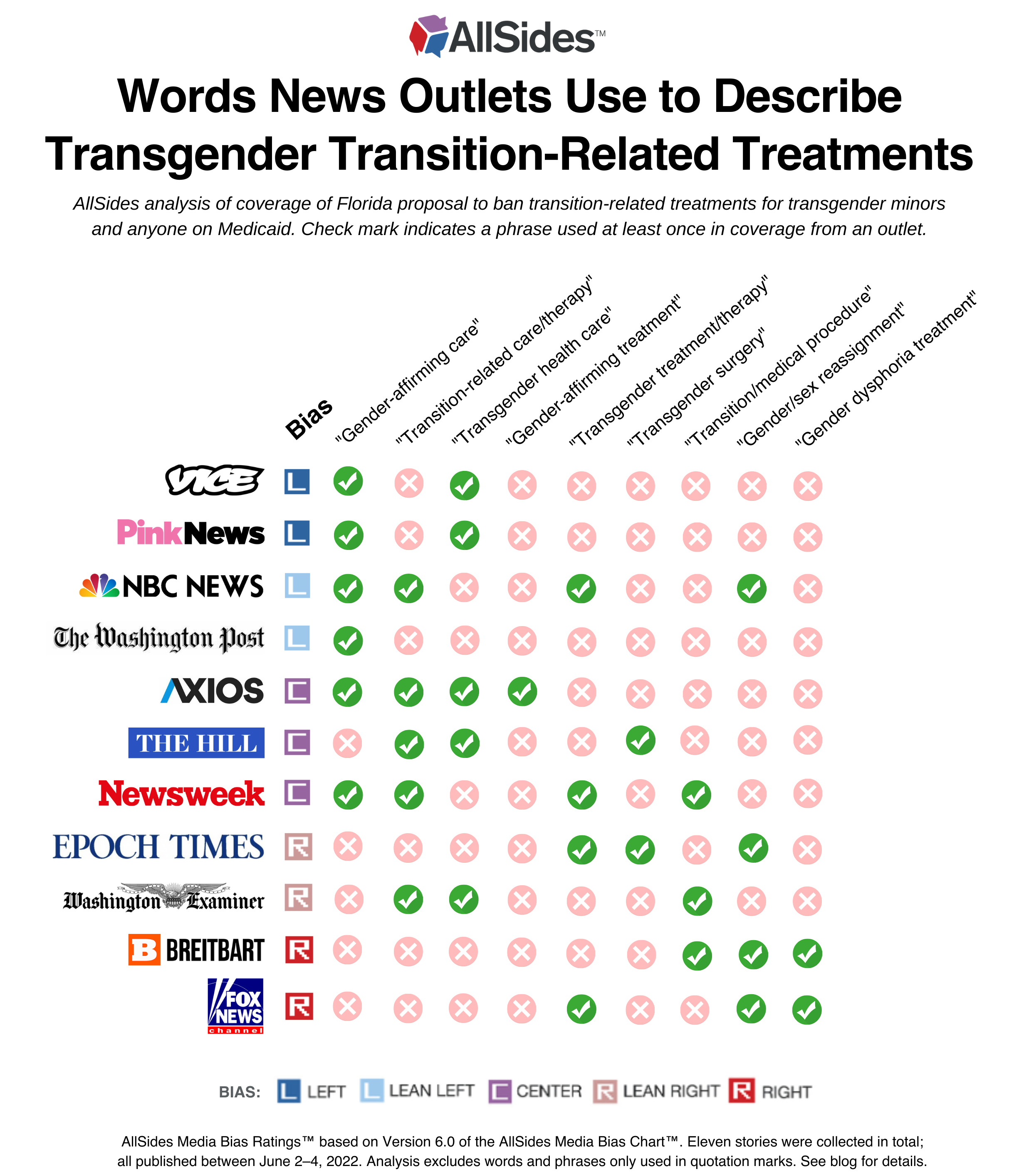 Outlets rated Center by AllSides more often used a variety of different phrases to describe transgender care or treatments. Axios was the only Center outlet to use the term “gender-affirming treatment” in its coverage.

A Look at How Different Outlets Covered The Story

Like many controversial topics, your beliefs may impact the perception you have on the story itself – is Florida’s proposed ban a heinous attack on trans healthcare and a violation of civil rights, or is it a step forward in preventing children from undergoing irreversible, experimental surgeries and interventions?

Here’s a snapshot of how headlines on this story appeared differently on the left, center, and right:

As shown above, outlets on the left covered the story with a very negative sentiment. PinkNews (Left bias) – a major LGBT community news source – described the proposal as a “cruel attack” against trans people. Vice News (Left bias) said Florida is creating a “war on trans people” and explains in the story that the proposal is a “full-scale attack on access to transgender healthcare.”

On the right, Breitbart (Right bias) said the Florida report is “challenging science of transgenderism” being pushed by “radical transgender activists.” Fox News (Right bias) highlighted in its headline that the state Health Care Administration described “transgender therapies” as “experimental.”

The 46-page report from the state of Florida explicitly mentions the term “gender dysphoria” in its analysis, which is a medical term used in the American Psychiatric Association’s (APA) DSM-V to describe “feeling of discomfort or distress that might occur in people whose gender identity differs from their sex assigned at birth or sex-related physical characteristics,” according to the Mayo Clinic.

The Trans Journalists Association’s style guide describes “gender dysphoria” as “the feeling of discomfort or distress some trans people feel when their bodies don’t align with their gender,” also stating that it “can also refer to feelings of discomfort many trans people experience when misgendered, deadnamed, or otherwise treated as the wrong gender.”

On the right, two outlets – Breitbart (Right) and The Epoch Times (Lean Right) – used the term “gender-affirming care” in quotes only. They also highlighted the phrase around a negative sentiment, such as Breitbart calling the term “a euphemism intended to make the mutilation of the human body sound like a compassionate course of action.”

Outlets on the left mentioned the phrase “gender-affirming care” in a much more positive light.

Interestingly, both sides of the argument argued that there were grave health concerns at hand. Outlets on the right were more likely to raise health concerns about transgender transition-related treatments and surgeries, such as adverse effects that could affect future fertility and growth. Left-rated outlets argued that limiting or banning transition-related care for transgender people may increase rates of depression and suicide among the population.

AllSides conducted this analysis of 11 articles from outlets rated by AllSides, all published between June 2, 2022 and June 4, 2022, that were specifically in regard to the state of Florida proposing a ban on trangender care or treatments on minors and people on Medicaid seeking certain types of surgeries or treatments.

Each story was analyzed manually for words used to describe transgender transition-related treatments. We did not evaluate the total number of times an outlet used individual terms or phrases.

Phrases used in quotes (e.g. “phrase”) were not included in the analysis, unless explicitly mentioned. Words expressed in quotes of any sort were also not considered in this analysis, whether it was a quote from the report or letter aforementioned or from an individual. The purpose of this analysis was to look at words self-described by media outlets themselves.

Andrew Weinzierl is the Director of Research and Data Journalism at AllSides. He has a Lean Left bias.