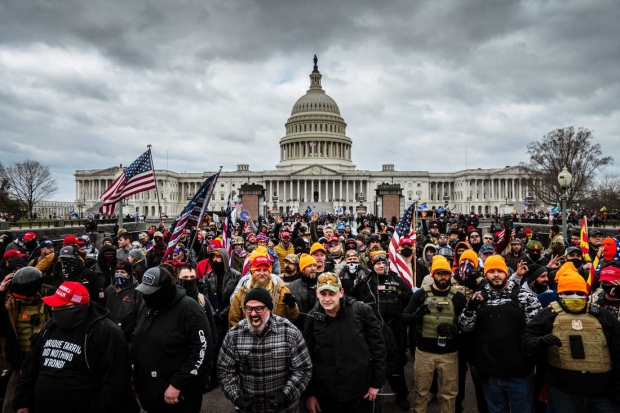 Was the event widely referred to as the Jan. 6 Capitol riot truly an “insurrection,” or just a riot? Media outlets on the left and right reveal political bias in how they describe the events of Jan. 6.

Many Americans remain divided on what took place on Jan. 6, 2021, at the U.S. Capitol. While both sides seem to agree on using the word “riot” when referencing the protesters who breached the U.S. Capitol, the left and right largely disagree as to whether the event qualifies as an “insurrection” or not.

Left-rated voices and media outlets generally believe that it was an insurrection, and use the words “insurrection” and “attack” to describe the event. Conversely, many right-rated outlets and voices don’t use the word “insurrection” to describe Jan. 6. What results is a case of word choice bias: a type of media bias in which a publication or writer reveals their political perspective through the words or phrases they choose.

The partisan split is reflected among the public, too: in a CBS (Lean Left) poll, 85% of Democrats said they view Jan. 6 as "an insurrection" or "trying to overthrow" the government, while only 21% and 18% of Republicans agreed, respectively. 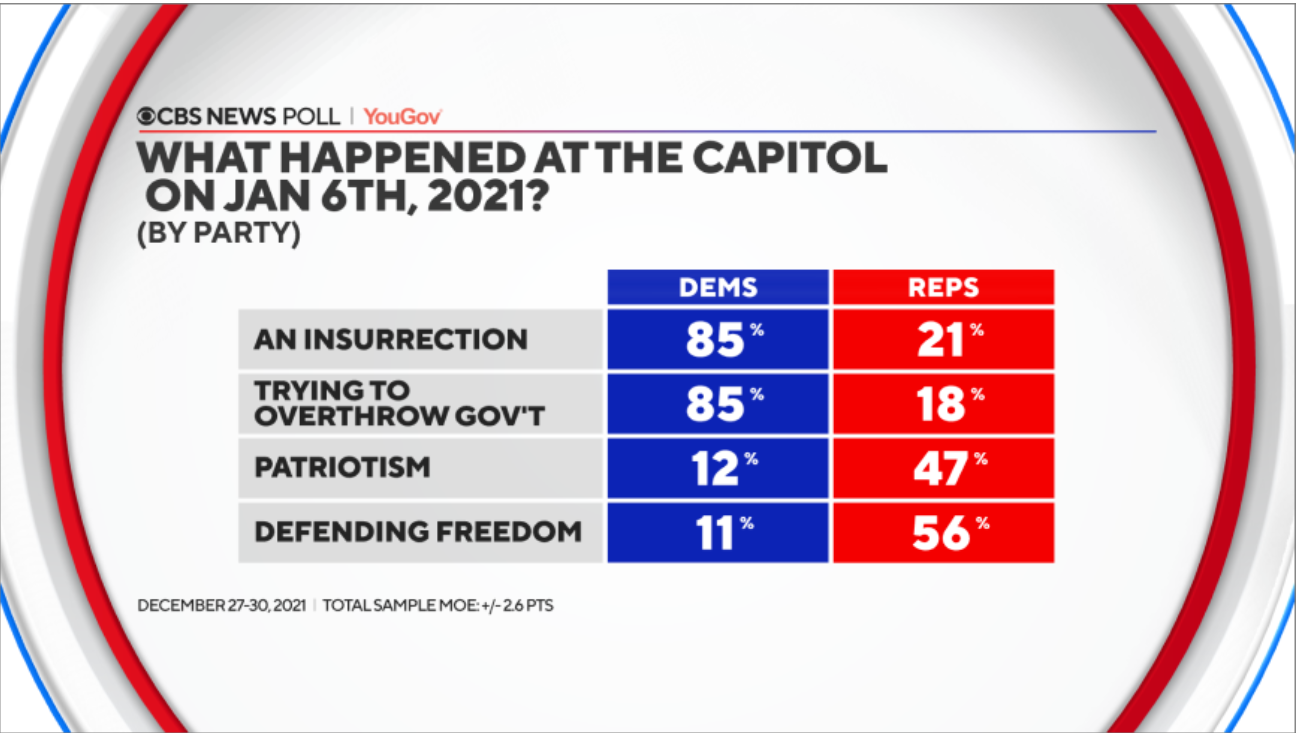 Understand both sides by reading why the left thinks Jan. 6 was an insurrection, and why the right largely disagrees.

The Left Argues Jan. 6 Was an Insurrection

The left points out that rioters carried weapons at the event and that their intent was to forcefully stop the vote confirmation to keep Trump in office against the will of voters.

One analysis piece from NPR (Lean Left bias) highlighted a late-night conference that occurred in the Oval Office on Dec. 18, 2020, between Trump and several White House officials. “​​Team Conspiracy,” as the NPR analysis labeled them, reportedly convinced the president that he should’ve won the 2020 election — suggesting several ideas such as ordering the U.S. military to immediately seize all voting machines. Trump concurred with this team’s perspective and tweeted, “Statistically impossible to have lost the 2020 election. Big protest in D.C. on January 6th. Be there, will be wild!”

While the House select committee has presented new evidence that suggests the Capitol riot might have been a coordinated effort, left-and center-rated outlets have been using “insurrection” terminology long before the public hearings began.

“Words matter,” read the headline of an Associated Press (Lean Left bias) analysis that was posted a week after the Jan. 6 Capitol riot. Staff members at the outlet were told on Jan. 7, 2021, that “protest was too mild a word” when referring to the gathering outside the Capitol. In its place, writers at the Associated Press were told that phrases like “mob,” “riot” and “insurrection” were appropriate.

Days after the event, NPR issued a similar verdict, writing of its language choices, “By definition, "insurrection," and its derivative, "insurgency," are accurate. "Riot" and "mob" are equally correct. While these words are not interchangeable, they are all suitable when describing Jan. 6.”

One analysis by Aaron Black at The Washington Post (Lean Left bias), titled “Yes, It Was an Insurrection,” highlighted how insurrection doubters have “cried hypocrisy” because the term wasn’t used to describe Black Lives Matter protests that turned violent in the summer of 2020. The key difference, according to the analysis, is that BLM protests “involved no effort to directly target government officials” or violently force “the replacement of an established government.” An insurrection “isn’t defined by the level of violence; it’s defined by its purpose.”

“Even if you somehow accept that the Capitol riot wasn’t as violent as some made it out to be — which, I mean, we have the video evidence, and there were multiple deaths and tons of injuries — it clearly included large-scale violence. There needn’t be hundreds of people with guns or other arms for it to be an insurrection,” Blake wrote.

On the one-year anniversary of the Capitol riot, news outlets reignited the debate surrounding the terminology used when describing the violent event.

TIME Magazine (Lean Left bias) described an “insurrection” as a “violent uprising against an authority or government,” and then asserted that “it is clear” those storming the Capitol “were rising up against the government.” The analysis argued that those against using the word to describe the Capitol riots are combatting “being redefined and thusly marked with the presumption of guilt.”

Certain left-rated fact-checkers, including one from PolitiFact (Lean Left), labeled claims from Sen. Ron Johnson (R-WI) and other skeptics who said the Jan. 6 Capitol riot “didn’t seem like an armed insurrection” as “ridiculous revisionist history.” Politifact noted that “video plainly shows the mob using all manner of makeshift weapons to attack police and force their way in [to the Capitol], including hockey sticks, flagpoles, fire extinguishers and a police shield stolen from an officer.” A debate over “why” the events of Jan. 6 occurred is reasonable, PolitiFact concluded, but the “what” question “shouldn't be debated. It was an armed insurrection.”

Some participants in the Jan. 6 riot, including members of the Proud Boys and the Oath Keepers, were convicted of “seditious conspiracy.” The Justice Department said the defendants “directed, mobilized and led members of the crowd onto the Capitol grounds and into the Capitol, leading to the dismantling of metal barricades, destruction of property, breaching of the Capitol building, and assaults on law enforcement.”

The Right Says Jan. 6 was Not an Insurrection

Many right-rated outlets do not use the word “insurrection” to describe Jan. 6. Some outlets have even published commentary and op-eds pushing back against the notion that Jan. 6 was an insurrection.

In general, voices on the right argue that protesters were largely unarmed, had no plan to forcefully overthrow the government, did not kill anyone, and that most of those who breached the Capitol stood around taking pictures rather than engaging in any terroristic acts.

In an op-ed published in the Springfield News-Leader (Center bias), Derek Snyder writes, “The word insurrection is a legal term,” quoting Black’s Law Dictionary definition that defines it as “a violent revolt against oppressive authority.” Snyder went on to note that an insurrection “requires an organized group that plans an attack to overthrow the government,” and argued the rioters storming the Capitol “weren’t acting as part of a coordinated rebellion” and had “no intent to topple the government.” Snyder concluded that they were “impassioned citizens at a rally that turned into a riot. It was shameful, but not an insurrection.”

Jeffrey Scott Shapiro echoed Snyder’s sentiments in an op-ed published in The Wall Street Journal (Lean Right bias) titled, “Stop Calling Jan. 6 an ‘Insurrection’.” (The Wall Street Journal has also published perspectives from people arguing it was indeed an insurrection.) Shapiro noted that not a single defendant was charged with insurrection under 18 U.S.C. 2383 because it’s “a legal term with specific elements.” Shapiro listed other events in American history that he said represented true insurrections, like Shays’ Rebellion in 1787, the Whiskey Rebellion in 1794 and — most notably – the American Civil War. He concluded that misusing this term when referring to criminal accusations can result in “overreaching enforcement of the law and a chilling effect on free speech.”

“The demonstrators who unlawfully entered the Capitol during the Electoral College count were unarmed and had no intention of overthrowing the U.S. constitutional system or engaging in a conspiracy “against the United States, or to defraud the United States,” Shapiro writes. “On the contrary, many of them believed—however erroneously—that the U.S. constitutional system was in jeopardy from voter fraud, and they desperately lashed out in a dangerous, reckless hysteria to protect that system.”

Commentator Tucker Carlson (Right bias) said, “It was not even close to an insurrection. Not a single person in the crowd that day was found to be carrying a firearm – some insurrection. In fact, the only person who wound up shot to death was a protester.”

Some on the right noted that protesters were charged with vandalism and trespassing, not insurrection. These are “exactly the kinds of charges leveled at other rioters,” said one writer from National Review (Right bias); they argued that these rioters “couldn’t have held on to a public library or a Chick-fil-A if they had tried.”

Meanwhile, some voices on the right have argued that other recent political events do qualify as insurrection. An example of an “actual insurrection,” according to Jenna Ellis, was when Politico (Lean Left bias) leaked an initial draft majority opinion that revealed the Supreme Court had decided to strike down Roe v. Wade.

The American Spectator (Right bias) published a piece titled, “The Real Insurrection: The BLM Riots,” in which contributing editor Jeffrey Lord points out the $1.5 million in damage and one death caused by a Capitol police officer to the approximated $1 billion in damage and 18 deaths caused by the Black Lives Matter riots in the summer of 2020. He writes that while there were 138 police officers injured at the Capitol, 574 riots in Summer 2020 resulted in more than 2,000 officers sustaining injuries. “What was taking place in all those American cities in 2020 was exactly a revolt against the civil authority in those cities,” he said.

In brief, many voices on the left believe that the Capitol riot was a coordinated effort by Trump and his extremist base, and therefore meets the traditional definition of “insurrection.” Conversely, many voices on the right believe that the riot was an uncoordinated effort and that using the word “insurrection” is a sensational and factually incorrect description.

The words used to describe certain events can be politically polarizing. At the same time, we also acknowledge the facts — this was a violent event that resulted in deaths and injuries. Using the word “riot” is justified considering how many protesters violently breached the Capitol. As mentioned earlier, “riot” has been used by both the left and right.

It’s easier to see a clearer picture when you’re not caught inside a filter bubble of one-sided perspectives. Use our balanced newsfeed to get multiple perspectives and to decide for yourself what you think about the issues.