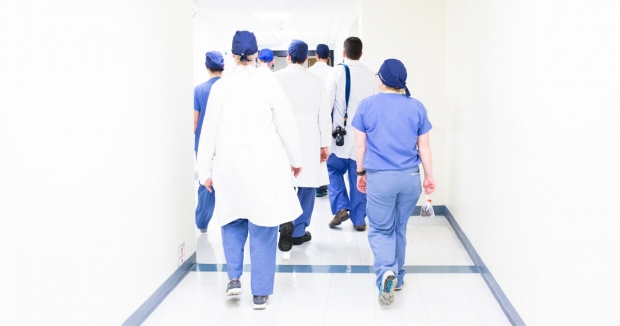 This article is from an author rated Lean Right.

As many statewide vaccine mandates go into effect for healthcare workers in places such as New York, California, Rhode Island and Connecticut, the news media is awash with stories about healthcare workers being fired for refusing the vaccine.

Something stands out among the coverage. In many articles about the firings, journalists do not interview healthcare workers who are being terminated over refusing the vaccine — or they interview them but don’t include their reasoning for refusing it. It’s a case of media bias by omission, which occurs when perspectives are left out.

President Joe Biden announced earlier this month a COVID-19 vaccine mandate for health care facilities that receive Medicare and Medicaid reimbursement. It impacts roughly 17 million health care workers, according to ABC News (Lean Left), and comes during a time when some are reporting staff shortages and overburdened workers due to an influx of patients.

Recent firings have made top headlines. One example is the media focus on North Carolina’s Novant Health hospital system, which has over 35,000 employees. It fired 175 of its workers for refusing to get a COVID-19 vaccine.

Yet you won’t find extensive interviews with those 175 workers in the press (at least not yet, perhaps not ever). A cursory look at media outlets covering the firings shows that most are prominently quoting hospital CEOs and spokespersons, not the workers.

When media bias by omission occurs, questions go unanswered: What are the concerns of those refusing the shot? Are they concerned about the risks of the vaccine itself? Or do they object to the principle that the government and their employers can force them to undergo a medical procedure? Are they seeing something on the frontlines that makes them not want the vaccine?

You won’t get answers from many of the articles on this topic. You’ll hear most prominently from hospital CEOs and spokespersons defending the mandates.

For instance, neither the New York Times (Lean Left) nor the International Business Times (Center) quotes anyone who is refusing the vaccine and their reasoning in their write-ups on the mandates. Nor does ABC News, which quotes multiple hospital spokespersons and CEOs, including Novant Health CEO and president Carl Armato. He said in a statement, “Without a vaccine mandate for team members, we faced the strong possibility of having a third of our staff unable to work due to contracting, or exposure to, COVID-19. This possibility only increases heading into a fall season with the more contagious and deadly delta variant.”

CBS News (Lean Left) reported on New York hospital networks like Northwell Health, which fired more than two dozen health care workers and gave others 30 days to comply. The report quotes Steven Corwin, president and CEO at New York-Presbyterian Hospitals, one of the largest systems in the country. It also quotes Tom Quatroche, the president and CEO of Erie County Medical Center in Buffalo, who says about 5% of the staff, roughly 400 people, are unvaccinated and on leave, leading to a shortage of care.

"We stopped elective inpatient surgeries. We stopped some of our outpatient patient visits. We stopped ICU medical transfers from other referral rural hospitals. ... We've asked for more time to work on strategies with the state to ensure that as many people as possible get vaccinated."

The CBS article does quote New York nurse Deborah Conrad giving some of her explanation for refusing, albeit with some slant: “"I'm wearing the same exact PPE I've worn the whole pandemic and it's always kept myself and patients safe. Why has that changed?" she said.”

But it goes on to say (emphasis mine): “The Western New York nurse said she still feels uncomfortable taking the shot despite medical data that has been released that the vaccines offer strong protection against severe illness.”

In this case, the writer mentions her side, but immediately frames it in such a way as to discredit it.

The Washington Post (Lean Left) quotes a nurse of 16 years who is refusing the shot, but focuses on her frustration over her religious exemption being denied, and doesn’t include her specific reasons for refusing.

In New York, healthcare workers who are fired over refusing the shot are not eligible for unemployment. So what may make someone make the decision not to get vaccinated, when the stakes are so high? In these articles, media outlets don’t seem to say. Some outlets have published articles exploring the reasoning of those who refuse the vaccine in the past. Those perspectives are omitted within specific articles covering mandates, though, which may be necessary to adequately cover mandates and subsequent firings.

If healthcare workers are like others who are choosing not to get the vaccine, we can speculate about their reasoning, of course. Some want to wait until the vaccines are further studied, and may be more comfortable getting it when it’s been available and in use for a few years. They may not think the risks of the vaccine, such as myocarditis or blood clots, are worth it — even though scientists say the risk is small, perhaps it’s not a level of risk they’re comfortable with. Others may have already had covid, and feel their natural immunity is sufficient. Others may not have had covid, but trust their immune systems to make them well more than the vaccine. Others may object to the idea that the government or an employer should force you to undergo a medical procedure as a condition of employment. Still others may say the idea that the unvaccinated are responsible for the vaccinated getting sick is misinformation.

One possible reason news outlets aren't including specific reasons for forgoing the vaccine is because they personally believe the reasons people give as being grounded in misinformation, and they don’t want to spread ideas they believe are wrong.

One local outlet, ABC6 of Rhode Island, ran a story in which it exclusively focused on those refusing the shot. The writer interviewed a nurse of 10 years and a former CNA who were both fired over the issue, over what they were feeling. Nurse Rosa Aguiar said: “It’s been a rollercoaster. Crying, a lot of anxiety medication, I have never been this stressed out in my life.” She continued: “The mental stress that I had since I got that email that I would be terminated because I didn’t show vaccine proof… I cried for days because I love doing this. That’s why I chose to be a nurse.”

It also quoted former CNA Paul Rianna: ​​“My last day was yesterday. Being a CNA and actually growing an attachment to your residents and your patients, it’s kind of heartbreaking knowing that you’re leaving them.”

Articles can’t always include every piece of information, of course. Bias is natural, and media outlets will always have to make decisions about what to do with limited resources, time, and space. They can’t include everything. But on an issue this contentious, including the other should should be expected from a balanced piece.

Unfortunately, many journalists are stuck in filter bubbles of their own. If they’re only seeing and consuming perspectives about how safe the vaccine is, how everyone should take it, and how dangerous being unvaccinated is, they’ll lose compassion for the other side — and be less likely to represent that side fairly in their coverage.

As you are reading the news, it’s important to think about what perspectives may be missing. An article that focuses on numbers and statistics (such as 175 fired out of 35,000) can omit the deeper human element — what are those 175 thinking and feeling? What are their reasons for refusing a vaccine mandate?

This is why it is so important to get your news from multiple sources. Otherwise, you may miss out on perspectives that give you the fuller story.