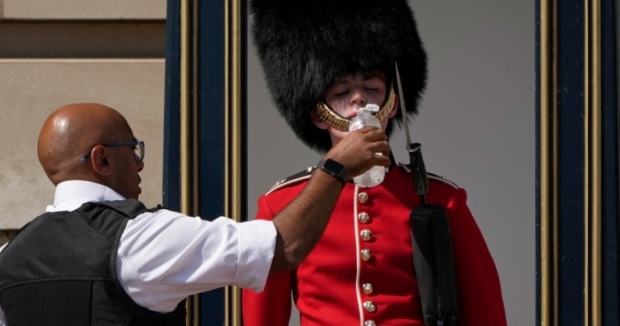 Over 100 million Americans are under heat-related advisories this week, and high temperatures are sweeping Europe. Why?

Nearly two-thirds of the U.S. will experience temperatures above 90° this week, and residents in some states, such as Texas and Oklahoma, have seen thermometers reach as high as 115° and multiple monthly and annual heat records broken. The United Kingdom also recorded its hottest day on record this week, while at least 1,500 people died from heat-related causes across Europe. Some studies estimate that only 20% of European households have air conditioning, compared to at least 85% of U.S. residences.

During a Wednesday visit to a former coal-fired power plant in Massachusetts, President Joe Biden didn't officially declare a climate emergency, as some had pressured him to do in light of the heat waves, but called climate change "a clear and present danger" and "an existential threat." He also announced $2.3 billion from FEMA to mitigate disasters like heat waves and wildfires.

According to the Environmental Protection Agency, "Unusually hot days and multi-day heat waves are a natural part of day-to-day variation in weather," but "as the Earth’s climate warms, however, hotter-than-usual days and nights are becoming more common." Political leaders remain divided, with some Republicans doubting that climate change was to blame for the heat waves. Many climate scientists agree that factors such as increased greenhouse gas emissions could be a factor in heat waves and the global temperature rise.

The heat waves and their consequences have been covered across the spectrum, especially by left- and center-rated outlets, which often tie them to human-induced climate change and global warming. Coverage from right-rated outlets has been less frequent and places less emphasis on the climate change angle. Some right-rated reports highlighted examples of clean energy systems, such as solar panels, failing due to high temperatures.

"Los Angeles, Miami and Phoenix have appointed 'chief heat officers' to mitigate the effects of climate change and to protect the city’s low-income minority residents, whom they deem especially vulnerable to high temperatures, reported the Post. Currently, heat waves are sweeping across the U.S. with temperatures reaching up to 115 degrees Fahrenheit in states like Texas and Oklahoma, according to Yahoo News."

"Dangerous heat is tightening its hold with 24 states on alert from Texas to Massachusetts. Records are expected to be broken in Oklahoma, New Mexico, and Texas where the scorching temperatures are fueling wildfires. Houston is expected to hit above 100 degrees for the next several days. Residents are being asked to limit use of electricity and water."

"With temperatures expected to surpass 110 degrees in some U.S. states on Tuesday, nearly 69 million Americans were facing the risk of dangerous heat exposure, and heat-related illnesses are projected to rise from Dallas to Pierre, S.D. Despite those concerns, conservatives leading these sweltering red states are reluctant to link these conditions to climate change. And those politicians are less likely to propose a plan to adapt to it."

"There is no other way to explain this development than human-made climate change bringing the heat to what were once temperate areas of the planet. There will soon be few countries left untouched, no region of the Earth that can’t expect punishing heat during its summer months. The only question left is whether such widespread consequences of a changing climate will finally spark the will to mitigate what’s likely to become an even more dire situation."

Heat wave kills more than 1,900 people in Spain and Portugal

"The ongoing heat wave could last a total of several weeks and has been accompanied by wildfires in the United Kingdom, France, Spain and Portugal, forcing thousands of people to flee their homes. Severe heat waves are of particular concern in Europe as they can often prove extremely deadly due to air conditioning being less ubiquitous than in the U.S."

As the world heats up, will climate action, too?

"For many climate advocates – and many in the general public – the widespread heat wave has been yet another reminder of how governments have failed to address climate change or move away from fossil fuels, a grim harbinger of a global warming future. Scientists are unequivocal in saying that climate change has made heat waves like this one much more likely, and hotter, in a way they say will increase as long as greenhouse-gas concentrations in the atmosphere keep rising."