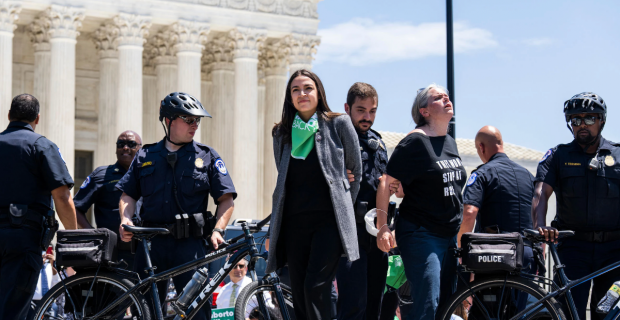 After more than a dozen House Democrats were arrested at a pro-choice protest on Tuesday, left and right media highlighted or minimized very different aspects of the story based on their own biases.

Rep. Alexandria Ocasio-Cortez (D-N.Y.) and at least 15 other members of Congress were arrested by Capitol Police for violating laws against crowding, obstructing, or incommoding during the protest outside the House of Representatives in Washington D.C. Videos depict officers leading Ocasio-Cortez, Rep. Ayanna Pressley (D-Mass.) and others away from the protest, and at one point Ocasio-Cortez raises her fist while being escorted out.

Both sides of the media showed bias by slant, a common type of media bias. Coverage from left-rated outlets focused more on what protesters were saying and fighting for, and on the potential consequences of the Supreme Court’s decision to overturn Roe v. Wade. Coverage from right-rated sources instead highlighted the charges against the Democrats, and questioned whether Ocasio-Cortez and others exaggerated the extent of their arrest by faking being handcuffed.

What the Left Said

Left-rated outlets tended to focus on statements from the arrested lawmakers, including Ocasio-Cortez, Pressley, Rep. Carolyn Maloney (D-N.Y.) and others. Many described how the protesters held signs that read, “Won't Back Down” and “Bans Off Our Bodies” and chanted similar slogans.

The actual reason for the arrests — the fact that the lawmakers were blocking traffic — tended to show up at least several paragraphs into reports from left-rated sources, always after the protest’s cause had been described and the high-profile participants named.

Insider (Lean Left bias) covered the arrests while framing conservatives as worthy of blame. A report from the outlet highlighted how the Democrats “were arrested near the Supreme Court on Tuesday as they protested the conservative majority's decision last month to overturn federal abortion rights.” Near the end of the article, Insider describes how efforts from House Democrats to codify abortion rights federally are “expected to fail given GOP opposition to abortion rights.”

To begin its report on the arrests, HuffPost (Left bias) described how the protesters “marched arm-in-arm shouting ‘our body, our choice’ and ‘we won’t go back’ in protest of the court’s decision last month to reverse the landmark Roe v. Wade decision that protected abortion rights nationwide.” It then offers a quote from Maloney, who said that “the Republican Party and the right-wing extremists behind this decision are not pro-life, but pro-controlling the bodies of women, girls, and any person who can become pregnant.”

A report from The Guardian (Lean Left bias) framed the police response to the protest as questionable. It describes how “the women sat down in the middle of the street as an act of peaceful civil disobedience, as a group of police officers gathered around them, broadcasting a pre-recorded message announcing imminent arrest for blocking the street.”

The Guardian also highlighted how “backlash against the supreme court, which is now made up of six ultra-conservative justices, including three who were appointed by Donald Trump, intensified” after the Roe decision.

What the Right Said

Right-rated outlets highlighted the police's explanation for the arrest much more prominently in their coverage — typically in the first or second paragraph of their stories.

Many also accused Ocasio-Cortez and Rep. Ilhan Omar (D-Minn.) of pretending to be handcuffed, with some — such as The Daily Wire (Right bias) and the New York Post (Lean Right bias) — basing their headlines around that claim. Video shows Ocasio-Cortez with her hands behind her back in a handcuff position, before she raises a fist to onlookers.

A report from Fox News (Right bias) framed Ocasio-Cortez and Omar as deceptive and performative. It described how “video caught Ocasio-Cortez walking away with a policeman holding her and another protester's arms, smirking, with her hands behind her back in the typical handcuffs pose, yet she wasn't cuffed,” and how “Omar also could be seen in a video walking away from the protest with her hands behind her back in handcuffs pose, despite not wearing them.” Fox also called Ocasio-Cortez “a lightning rod of criticism on the right.”

Similarly, an article from Washington Examiner (Lean Right bias) described how “Ocasio-Cortez was escorted away with her arms placed behind her back, acting as if she was handcuffed, although she was seen on camera raising her fist in defiance.” It then highlighted how “after being escorted away, several members of Congress gathered together away from the protest, and few, if any, were likely detained.”

Overall, coverage from right-rated outlets tended to downplay the protest’s significance while highlighting claims that Ocasio-Cortez and others were pretending to be handcuffed. Ocasio-Cortez denied the allegation, and accused Republicans of creating conspiracy theories to “distract people from what’s actually important.”

These examples of media bias on both sides are just the latest bias flare-up when it comes to abortion coverage after the Supreme Court’s overturning of Roe vs. Wade.

The left tends to focus on concerns about abortion access and the Supreme Court being conservative. The right tends to frame Roe’s fall as a win for state’s rights and pro-life ideals. Recently, outlets from left to right have displayed many different types of media bias in covering the story of a 10-year-old girl who traveled from Ohio to Indiana for an abortion after Ohio’s ban went into effect.

Politicians and the media often make abortion out to be a more divisive issue than it actually is. Read about different aspects of the abortion debate where Democrats and Republicans agree.