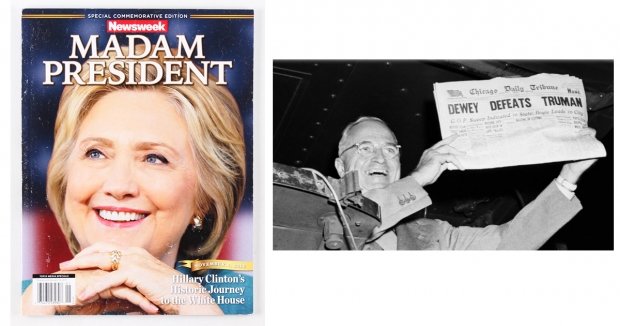 Since media outlets first started calling swing states such as Pennsylvania and ultimately, projecting Joe Biden the winner of the 2020 presidential race, there’s been a dramatic shift in the country in the last few days.

Celebratory crowds gathered in deep blue major cities, such as San Francisco and Washington DC, where people danced and sang together (inviting a media squabble over whether or not there’s been hypocrisy on the left about concern over "super spreader" events — see Fox and CNN taking jabs at each other on Twitter).

Meanwhile, pro-Trump and America First crowds gathered in state capitols such as Lansing, MI and Harrisburg, PA, where people prayed, expressed concerns about the election process and potential fraud, and rallied people to fight for their country.

The crowds are the result of the media projecting a Biden win. Just by visiting AllSides’ homepage, you can see this continuing today: media outlets across the spectrum are already speculating about what executive orders Biden will issue and what priorities Jill Biden will focus on as First Lady. TIME magazine also released a full cover of Biden and Kamala appearing masked and triumphant.

But the election is technically not over. Lawsuits have been filed in multiple states to address numerous allegations of fraud.

A Pennsylvania state judge ruled in the Trump campaign’s favor when it allowed poll watchers to stand 6 feet away from vote counters, after the camp claimed poll watchers were being made to stand 15 to 105 feet away, preventing them from properly observing the count. Philadelphia election officials have appealed the decision to the state Supreme Court, and the outcome of the appeal is pending. In addition, there’s a dispute before the Supreme Court about whether ballots the state received after 8 p.m. on Election Day should count. There are lawsuits in multiple other states, as well as concerns about computer system fraud. And while some people doubt that the lawsuits will turn out in Trump's favor, our system legitimately allows for court challenges and recounts.

We may very well end up with President Biden (or President Kamala, a suspicion held by some on the right), but that is not yet 100% certain. While the media obviously polarizes us by convincing us of specific narratives, political philosophies, and ideas, the media also has the power to be very convincing when an election is technically incomplete.

There is nothing official about media outlets such as Fox News, the Associated Press, the New York Times, and other major outlets making a statement calling a race for a candidate. (Some outlets, such as Newsmax and The Epoch Times, will not call the election until all legal challenges are resolved.) Technically, the vote is not yet certified and the Electoral College has not yet voted. Much of the legal process has yet to come to pass. And yet, while the country was on pins and needles for days, as soon as media outlets called the race, much of the general population roundly accepted that the race was over.

In other close elections, the media has been wrong. About 125,000 copies of a Newsweek magazine edition featuring Hillary Clinton’s face and "Madam President" as the headline went to print in 2016, and the Chicago Daily Tribune ran the headline "Dewey Beats Truman" in 1948. The media also projected Al Gore to be the winner of Florida, and thus the entire race, in 2000, which the Supreme Court ultimately proved to be false (though it’s worth noting an image shared by Trump communications chief Tim Murtaugh purporting to show a Washington Times headline declaring Gore the winner is fake).

Of course, holding the country in a stalemate would not necessarily be ideal either, as uncertainty can breed fear and anger, possibly even violence. Some outlets, like AP Politics, have provided details to give readers insight into why they chose to call the race. It’s important for the nation to get unstuck and move forward, and there is value in our institutions using objective criteria to determine an outcome — as long as everyone realizes that is what is happening.

Yet it’s always worth remembering the media’s ability to shape our perception of reality. It also offers a fascinating look into the human psyche. Groupthink means we are often more comfortable accepting the beliefs of the majority, especially in cases where nuance would require us to stand outside or be opposed to the group, which our tribal nature signals as dangerous to us.

The media is one of the most powerful tools in shaping our thinking and perception. Without a critical mindset and a willingness to dig deeper, we can easily be sucked into whatever narrative projection fills our screens. Caution is key.

This is just one more reason the work AllSides is doing to provide balanced news is valuable. We make it easy for you to get views from multiple sources, so you’re not duped or misled, and can think for yourself.