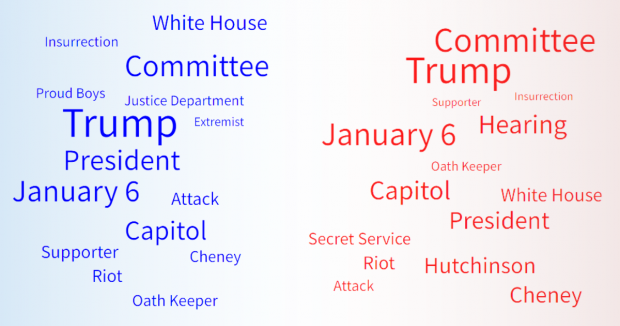 In 2022, the U.S. House Select Committee on the January 6 Capitol riot held nine public hearings in an effort to reveal evidence acquired in the investigation to tell the story of the storming of the U.S. Capitol.

The hearings dominated news headlines – and outlets on the left and right have been covering the incident very differently, revealing media bias.

To help paint a picture of the contrasting headlines, AllSides conducted an analysis of 50 news stories from prominent U.S. news outlets covering five of the most-prominent public hearings. Here’s what we uncovered. 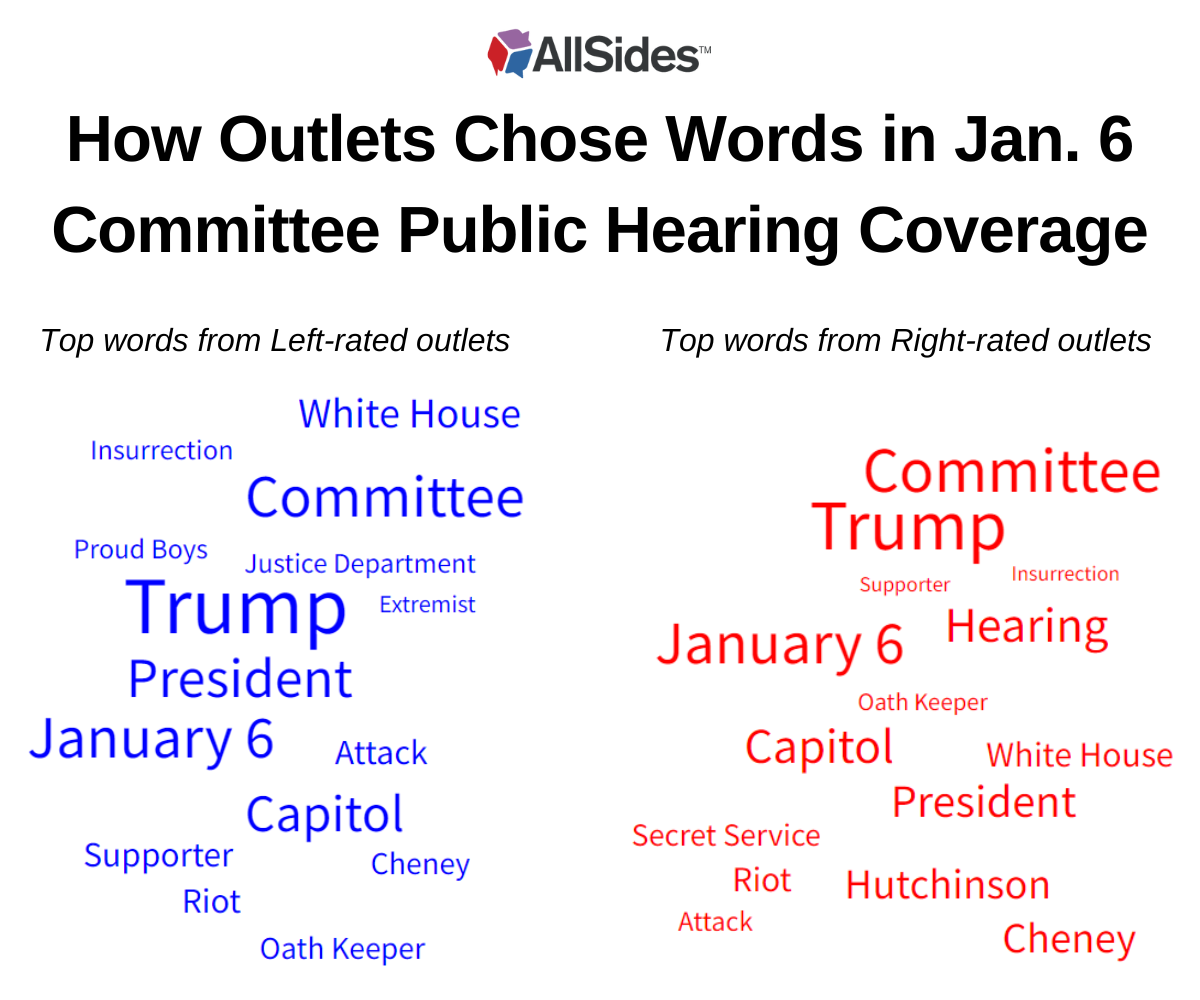 Though many of the main words – President, January 6, Capitol – were unsurprisingly used similarly by left- and right-rated media, they were some key examples of differences in word choice, revealing different perspectives on the Jan. 6 incident. 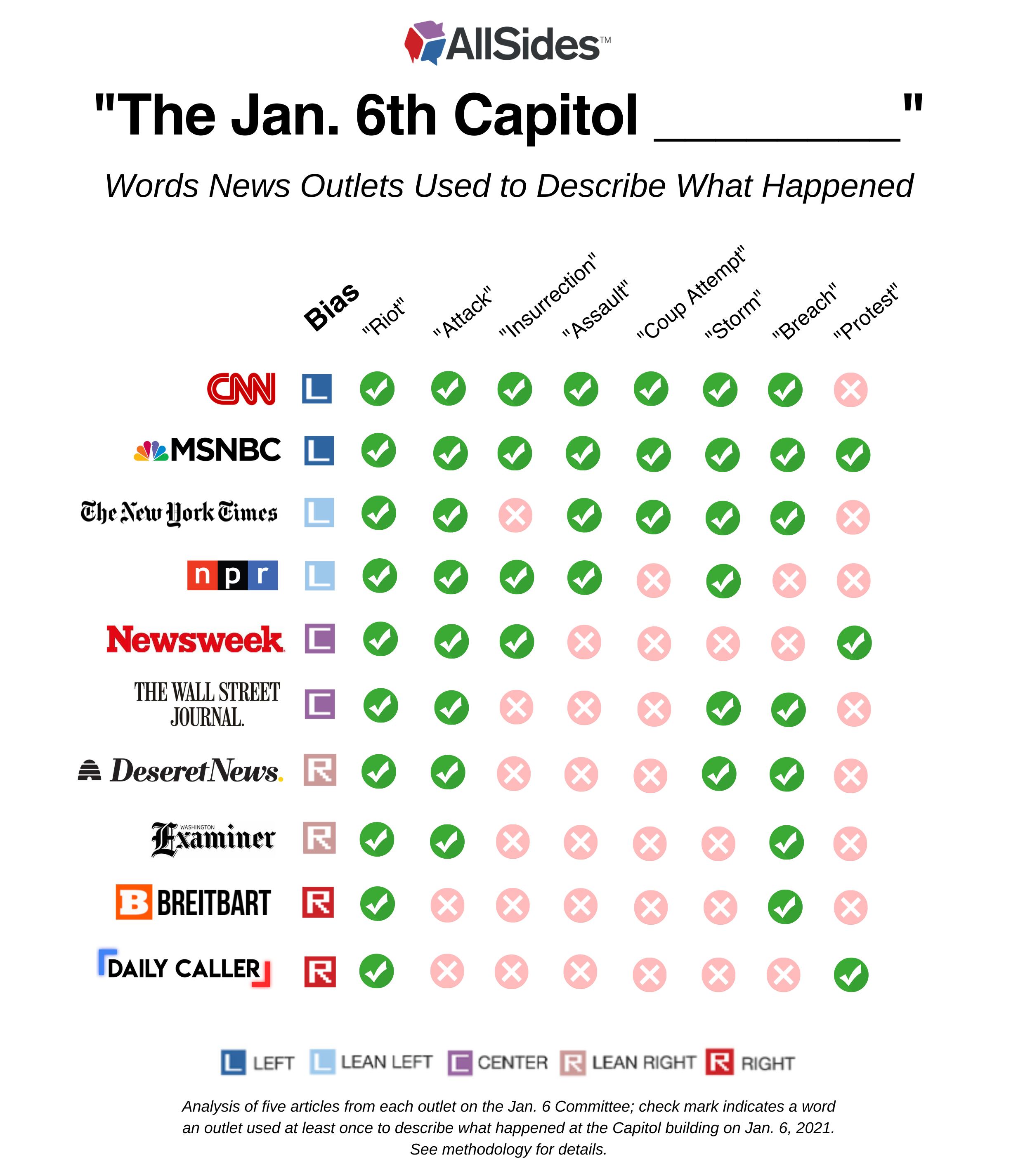 As shown in the chart above, all outlets analyzed used the term “riot” to describe what happened at the Capitol on Jan. 6. Outlets on the left used terms that the right did not – “insurrection,” “assault” and “coup attempt.” Also worth noting is that MSNBC (Left bias) used every word analyzed to describe the Capitol riot, while Right-rated outlets used very few.

RELATED: Was Jan. 6 an Insurrection? Where the Left and Right Disagree

According to an August 2022 poll from Monmouth University, 52% of the American public believes Jan. 6 was an “insurrection.” This assessment is largely split among ideological lines, with 87% of liberals and 18% of conservatives describing it as such.

Outlets on the left mentioned the U.S. Justice Department by name significantly more than outlets on the right – oftentimes mentioning the possibility of criminal referrals to agencies or that the department charged at least a dozen Jan. 6 rioters with the crime of seditious conspiracy.

Only one outlet on the right, Breitbart (Right), mentioned the word “seditious” in its reporting, though in a skeptical manner (emphasis from AllSides):

“CNN–the flagship cable network for the establishment–is currently having Carl Bernstein and Bob Woodward of Watergate fame on to explain how January 6 was ‘seditious’ and compare the forthcoming hearing to the Watergate scandal.”

The Daily Caller (Right) ran with the headline “Bombshell J6 Testimony About Trump’s Behavior Collapses Within Hours” on June 29, 2022. As of October 2022, the Secret Service has not publicly denounced Hutchinson, and it is unknown if they testified about the matter to anyone.

Only one article on the left, from CNN, mentioned that Secret Service members intended to testify about Hutchinson’s claims. The other three outlets analyzed did not mention it at all.

Coverage of Violence and Extremist Groups

Outlets that were rated Center and on the left also mentioned fatalities related to the attack, specifically mentioning police officers who died by suicide after the riot, whereas the right did not. However, one outlet on the left, CNN (Left) may have spread a misleading message when it described that “four rioters and one police officer died” on January 6. AllSides fact-checked this claim about a police officer and found it to be false.

RELATED: Did The New York Times Spread Disinformation About a Capitol Officer’s Death?

Ashli Babbitt, a rioter fatally shot by the Capitol Police on Jan. 6, was mentioned once by the right, once by the left, and once in the center.

The Oath Keepers, a right-wing group whose members were present during the Jan. 6 riot, were mentioned significantly more by outlets on the left, in which other words like “extremist” and “far-right” were accompanying adjectives.

“While it did not draw any direct link between Mr. Trump and the domestic extremists who orchestrated and stood at the forefront of the Capitol attack, the committee set forth in meticulous detail how Mr. Trump’s words and actions united a disparate set of far-right groups and militias and spurred them to plot a violent effort to disrupt the peaceful transfer of power.”

The use of the word “supporters” was more common on the left, where outlets described the events of Jan. 6 in more detail, often describing those involved as supporters of Donald Trump. When the right referenced Trump supporters, they mentioned Trump telling his supporters to “leave” and “stand down.”

Committee Vice Chair Rep. Liz Cheney (R-WY), who is one of two Republicans on the committee, was mentioned more than twice as often by outlets on the right than those on the left.

RELATED: Is it Fair to Compare the Jan. 6 Capitol Riot and the Summer 2020 Riots?

For the word clouds, only words relevant to the story were included; common words such as "said," "this," "of," "and," "would" were excluded. Each word was analyzed for the number of times used on the left, in the center, and on the right. The more times a word was present, the larger the word in its respective word cloud. Mentions of “Jan 6,” “Jan. 6,” “January 6,” and “1/6” are all identified as “January 6” in the word clouds.

For the chart shown to visualize how news outlets used to describe the event on the U.S. Capitol on Jan. 6, words used only in quotations or describing specifically how others recalled the event are excluded; the intent of this chart is to show how news outlets reported on the event themselves. Mentions of “coup attempt,” “attempted coup,” and “coup” by outlets are all identified as “coup attempt” in the chart.