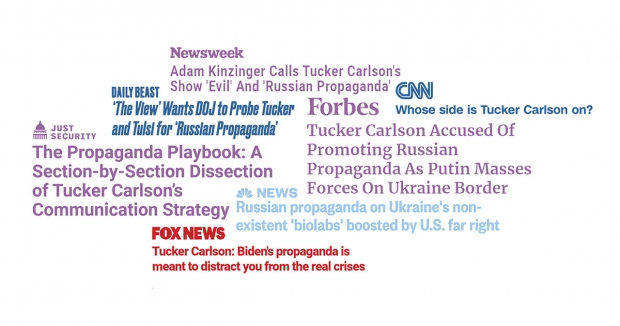 While accusations of “propaganda” are nothing new in American media, such accusations have taken on a new life since Russia began moving troops to the Ukrainian border.

Persistent disinformation and competing narratives surrounding the invasion have made it even more important to discern whether accusations of “spreading propaganda” are valid, merely circumstantial or possibly made in bad faith. Recent propaganda accusations against popular Fox News (Right bias) host Tucker Carlson demonstrate just how consequential this issue can be.

Why We Use the Word ‘Propaganda’

Most broad definitions of propaganda aren’t that different from how many would define advertising, political advocacy or even media bias. At countless levels of American society, organizations of all sizes are intentionally using ideas, information and imagery to push a narrative or persuade an audience.

The word “propaganda” is also almost exclusively used by Western media in relation to governments and other organizations viewed as authoritarian. That most often means Russia and China, but it can also refer to large corporations, like when socialist outlet Jacobin (Left bias) decried the “corporate propaganda” of rideshare companies pushing California’s Proposition 22.

A frequent target of the “propaganda” label is RT (Lean Right bias), which has a well-documented history of twisting stories to pursue the Russian government’s interests. According to one anonymous former RT reporter, their editor directed them to highlight “anything that causes chaos” ahead of the 2016 Brexit vote.

Furthermore, accusations of “propaganda” are generally negative. No one likes to be manipulated, especially when it’s intentional.

So, when Daily Beast (Left bias) columnist Julia Davis wrote on Dec. 30 that Tucker Carlson was “boosting Russia’s new propaganda war,” the accusation implied that Carlson was participating in an authoritarian regime’s malicious effort to manipulate the public.

Davis’ comments were in response to Carlson’s criticism of NATO, the defensive alliance created in 1949 to protect Europe from the Soviet Union during the Cold War.  In early December, Carlson said NATO was an “army without a purpose,” implying that since the Soviet Union had dissolved, Russia no longer posed a threat to its Western neighbors. “Vladimir Putin does not want Belgium,” Carlson said. “He just wants to keep his western borders secure.”

That wasn’t the first time Davis criticized Carlson for purportedly pushing claims that “fit squarely within the Kremlin’s current propaganda offensive,” and it wouldn’t be the last time Carlson faced such accusations.

Back in June 2021, Davis wrote about a “ploy” by Russian President Vladimir Putin to suggest the U.S. had ordered the assassination of Capitol rioter Ashli Babbitt. The plan “paid off in spades,” Davis wrote, when Carlson aired a clip of the claim and appeared to express “agreement.” Furthermore, Davis described how Russian media figures praised Carlson’s segment, proclaiming that “influencing public opinion in America” was good for Russia because “whatever harms them benefits us.”

Large swaths of left and center-rated media voices have since made similar criticisms of Carlson, implicitly or directly accusing him of media bias and “spreading propaganda” by making arguments that happen to favor Putin’s narrative.

Carlson’s most recent controversy came when he accused the Pentagon of lying about Russian claims of “dangerous biological weapons” purportedly funded by the U.S. and stashed in Ukraine.

According to Yahoo News (Lean Left bias), Fox News national security correspondent Jennifer Griffin contradicted Carlson an hour later, telling Sean Hannity that “the U.S. has been very open about its involvement” with “converting” Soviet-era biolabs safely, reiterating statements by the U.S. and other countries.

Then, on March 13, Mother Jones (Left bias) reported on a leaked Kremlin memo telling “state-friendly media outlets” to feature more of Carlson’s monologues in their broadcasts.

The documents, provided by an anonymous source said to be “a contributor to a national Russian media outlet,” point specifically to Carlson’s arguments blaming the Ukraine conflict on the U.S. and NATO. While Carlson was the only specific media figure mentioned, another memo pointed to how the New York Post (Lean Right bias) blamed recent U.S. inflation on President Joe Biden instead of Russia.

Regardless of the documents’ authenticity, Russian state media has often featured Carlson’s arguments. Does that prove Carlson’s involvement in “propaganda”? If media figures independently align with the narrative of state propagandists, do they become extensions or tools of propaganda?

This is hardly the first time Russia has tried to stoke political divisions in the U.S. For instance, Russia has a long history of using racial divisions to sow discord in America, including during the 2016 election.

It’s also worth noting that Carlson is not the only voice criticizing Putin’s Western enemies. In late February, Daily Wire (Right bias) commentator Candace Owens blamed the U.S. and NATO for Russia’s aggression towards Ukraine. Self-described “Christian nationalist” commentator Lauren Chen replied to Owens’ argument by asking why the West wasn’t standing with “the people in Donestsk and Luhansk who want independence?”

On the other end of the political spectrum, Jacobin writer Branko Marcetic has accused the media of “Neo-McCarthyism” against Russia and described “Orwellian attacks” against critics of NATO as part of a “jingoistic fervor.”

These voices help to paint a different picture of Carlson — as an independent minority voice in a diverse political landscape. They can’t all be “propagandists,” can they?

Furthermore, many of Carlson’s critics don’t need the word “propaganda” to explain their opposition.

On the right, former Vice President Mike Pence (Right bias) said there was no room in the Republican party for “apologists for Putin.” Writers in several outlets took the remarks as a swipe at former President Donald Trump, who called Putin’s invasion tactics “genius,” but some also saw a connection to Carlson.

Ultimately, whether Tucker Carlson’s rhetoric counts as “propaganda” matters less than the “propaganda” most Americans agree on — the narrative of Putin’s Russia.

The aggressor in the current conflict in Ukraine is governed by a regime that, as the Carnegie Endowment for International Peace (Center bias) put it, “lies insistently and incessantly, even when it doesn’t need to.” Its record of disinformation, as established by Western intelligence officials, includes denying involvement in assassination attempts on former Russian spy Sergei Skripal and Russian opposition leader Alexei Navalny.

The Russian media’s disinformation during the war in Ukraine has been well-documented. A BBC News (Center bias) report from late January noted that Russian state TV figures rejected the possibility of a Russian invasion and ignored Russia’s troop buildup around Ukraine. Around the same time, a New York Times (Lean Left bias) report described “an uptick in social media posts accusing Ukraine of plotting a genocide against ethnic Russians.” Reporting in several outlets like VICE (Left bias) featured families with members on both sides of the conflict, where some believed Putin’s narrative and others did not.

After thousands of Russians were arrested for protesting the war, the Russian government passed legal restrictions on speech criticizing the invasion. With Facebook, Twitter, and several foreign media sites blocked, Russia’s state-run media now has more power than ever to entrench the Kremlin’s narrative.

Regardless of how you feel about Tucker Carlson’s rhetoric, at the end of the day, he’s just one voice among many. The press freedoms enjoyed by the U.S. and other countries ensure that when one voice elevates an authoritarian regime’s narrative, there will always be another voice ready to challenge it.

Use our live blog to keep up with examples of fact-checking, misinformation and fake news on the Russia-Ukraine conflict.

Joseph Ratliff is AllSides’ News Editor. He has a Lean Left bias.