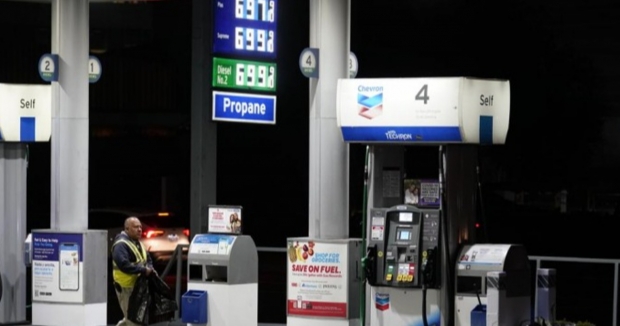 Already-high energy costs in the U.S. are rising more as the global economy responds to Russia's invasion of Ukraine.

On Tuesday, President Joe Biden announced that the U.S. will ban imports of Russian oil, natural gas and coal. The import ban had already gained bipartisan support before Biden's announcement. Roughly 3% of the oil barrels the U.S. imported in 2021 came from Russia, ranking fourth behind Canada (61%), Mexico (10%) and Saudi Arabia (6%) as the U.S.'s biggest sources of oil imports.

Meanwhile, the average price of a gallon of gas in the U.S. hit an all-time high of $4.31, and the price of a barrel of oil hit its highest level since 2008. Biden and others are considering other sources of oil imports like Saudi Arabia and Venezuela; OPEC, the intergovernmental organization that seeks to stabilize oil markets, has expressed resistance to increasing global oil supply.

High prices have been covered across the spectrum. The right often places blame for rising prices on the Biden administration, state regulations that create differences in gas prices across the country, and pre-existing inflation. Some on the left accused the right of hypocrisy in calling for Biden to ban Russian oil and then criticizing Biden when oil prices subsequently rose.

The high energy costs and import ban have also revived the debate on fossil fuels and clean energy. Some on the left argue that phasing out oil imports from Russia could lead the U.S. to rely less on fossil fuels overall and concentrate more on cleaner energy sources and being carbon-neutral. Many on the right have called for the U.S. to shift to domestic oil production by resurrecting the Keystone XL pipeline project and rolling back limitations on fossil fuel drilling, arguing that oil is cleaner than other fossil fuels and criticizing the Biden administration for purportedly ignoring these options and focusing too much on climate change.

"'They’re going to go up,' Biden said. 'Can’t do much right now … Russia is responsible.' The U.S. is seeing record-high gas prices in the country, with the national price for one gallon of gas breaking the previous high from 2008, AAA data shows. The price of gas has risen during Biden’s presidency."

The White House Gaslights on Gas

"Biden’s flurry of executive orders during his first months in office included killing the Keystone XL pipeline, which would have transported up to 830,000 barrels of crude oil per day from Canada to the U.S., and halting new oil and natural-gas drilling on public lands and waters. Last month, the administration indefinitely halted all new drilling permits altogether. The effect of all that has been exactly what you’d expect — American energy costs have been steadily climbing."

"Psaki said that while energy security was a key part of the meetings in Venezuela, U.S. officials also discussed the welfare of detained U.S. citizens. She had a similar message on negotiations in Saudi Arabia and Iran, noting that the talks were in progress and that energy was just one piece of the multipronged discussions."

"As the US government works to lower inflation through longer-term solutions, like monetary policy and loosening up supply-side constraints, this stimulus will help low- and moderate-income families afford necessities in the short term. And for those concerned that additional stimulus checks may exacerbate inflation, consider the perspective of a parent trying to afford food or medicine for their children."

U.S. gas prices aren’t quite at record highs, if you account for inflation, but soaring oil costs could change that soon

"Russia's invasion of Ukraine has disrupted an already tight oil market, where prices have increased on the back of a post-COVID economic rebound. But calling current gas prices a “record-high” isn’t really comparing like-with-like. If you account for inflation, gas prices still have a while to go before they break the 2008 record."

"Republican legislative leaders in Michigan and Pennsylvania announced proposals Wednesday to suspend or reduce state gas taxes. That came after the Republican governor of Georgia and Democratic governor of California both called for relief from state gas taxes Tuesday, when President Joe Biden ordered a ban on Russian oil imports."