From the US and Elsewhere, People Travel to Ukraine to Defend Against Putin's Attacks

Across the world, thousands of people are seeking travel to Ukraine to help in the fight against Russian President Vladimir Putin's invasion.

Ukraine's Defense Minister said Monday that the country received over 20,000 applications "from foreigners who are ready to come to Ukraine and protect the world from Russian Nazis on the Ukrainian front." Among the roughly 20,000 applicants to Ukraine's "International Legion" of fighters are 3,000 Americans. Last week, the White House reiterated its guidance against traveling to Ukraine, and on Friday, Pentagon spokesman John Kirby urged "Americans not in Ukraine not to go." Russia is reportedly looking to enlist foreign fighters as well; a Wall Street Journal (Center bias) report suggests that Russia is recruiting Syrians for urban combat in Ukraine.

Reports across the spectrum have highlighted military veterans in the U.S. and others across the globe who are heading to Ukraine to defend against the Russian invasion. Some coverage from left-rated sources framed foreigners seeking to fight in Ukraine as "war tourists"; one writer for MSNBC argued that the conflict and the role of foreign fighters "raises serious risks for recruitment, radicalization and mobilization in violent white supremacist extremist movements." Reports from right-rated outlets sometimes glorified people who chose to go to Ukraine to defend and fight, and highlighted Ukraine's calls for participation and ways for people in the U.S. to sign up. 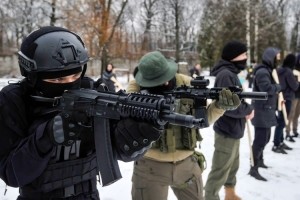 Russia’s Feb. 24 invasion of Ukraine prompted Ukrainian President Volodymyr Zelenskyy to later call on all “citizens of the world” to join the fight against the Russian army and help defend “peaceful coexistence.” Thousands appear to be taking up the cause, including dozens of Americans and Canadians.

But among the well-meaning citizens lining up to fight for Ukraine are some global volunteers with links to white supremacist and far-right extremism. In recent years, global neo-Nazi and white supremacist extremist foreign fighters have sought training and combat experience by joining ultranationalist defense militias in Ukraine. A member of the... 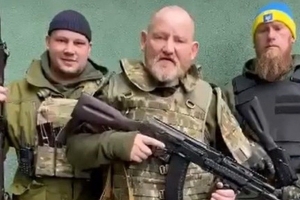 A Scottish grandfather has travelled to Ukraine to help the country's armed forces fight the Russian invasion.

Flanked by two Ukrainian fighters, the builder said: "My name is Rob. I'm a 61-year-old grandfather from Scotland."

The BBC understands more than 100 people in Scotland have volunteered to fight in the conflict.

Britons have been urged to support the Ukraine from the UK, rather than travelling to join war, by the head... 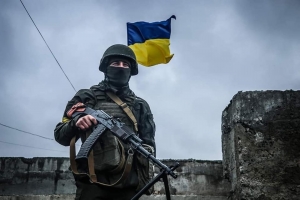 Ukraine launched a website Saturday where foreigners can apply directly if they want to go to Ukraine and fight against Russian invaders.

President Volodymyr Zelensky says the country received thousands of applications since he put out the call for a new self-styled International Legion on Feb. 27 — and he’s expecting more than 16,000 foreign volunteers to join the cause.

In many ways, Ukraine’s International Legion harkens back to the International Brigades, the storied volunteer formations fighting for the Republican Government during the Spanish Civil War in 1936-1938, the Kyiv Independent reported Saturday....