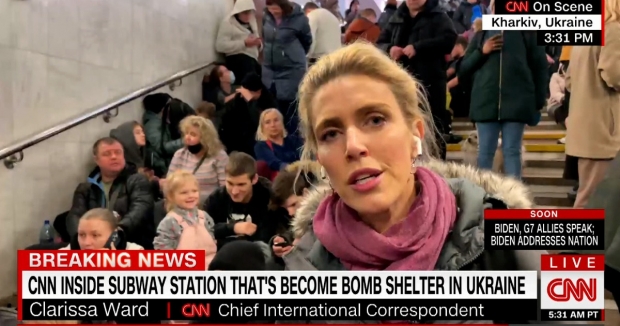 The war in Ukraine has resulted in untold amounts of suffering, misery and death. It has dramatically upended the post-Cold War geopolitical and security infrastructure of the European continent and has remade American domestic politics.

It may also lead to CNN becoming a cable news network again.

When media entrepreneur Ted Turner founded a cable television network dedicated to providing 24-hour news, its impact was a relatively subdued one. It wasn’t until the first Gulf War erupted ten years later that CNN established itself as a serious presence in the broadcast news universe. Through the September 11 terrorist attacks, the death of Osama bin Laden, numerous presidential elections and seminal natural disasters in the U.S. and around the world, CNN became the go-to source for critically important breaking news.

But by the 2010’s, CNN had lost that preeminent position. The emergence of Fox News and MSNBC provided more sharply-edged commentary for an increasingly polarized audience, and CNN was left somewhere in the middle, targeting a quickly vanishing segment of the population that preferred even-handed news coverage and analysis to the polemics of the political extremes.

Something had to change for CNN, and thanks to the efforts of two men, it did. The first of the two was Jeff Zucker, the longtime television producer and executive, who took over the network in 2013 and immediately promised that the network would provide “an attitude and a take” to its viewers and to appeal to a younger audience.

The second person who changed CNN was Donald Trump. His presidential campaign in 2015 quickly became a ratings bonanza for most media platforms, but none committed themselves more to coverage of Trump’s candidacy than Zucker (who had overseen Trump’s program The Apprentice several years earlier). The amount of time that CNN devoted to Trump’s campaign rallies and other related coverage became so all-consuming that other candidates complained about the imbalance. But Trump drew lots of eyeballs, and so Zucker kept going.

Years later, Zucker admitted that he had leaned too heavily on Trump coverage during the campaign. But that approach was the catalyst for a broader shift in CNN’s political coverage. The network began to highlight a growing number of highly partisan pundits on both sides of the aisle, as Zucker indicated that these formats were consciously designed to mimic the highly-charged debates on ESPN and other sports networks in their coverage of athletic events.

After the election, CNN abandoned the center almost completely, shifting into a more adversarial role against Trump and providing platforms to outspoken left-leaning voices like Don Lemon and Chris Cuomo. It was Cuomo’s downfall on a variety of ethical and professional shortcomings that indirectly led to Zucker’s recent resignation as well, when Zucker admitted to an extramarital relationship with a staff member that Cuomo had apparently threatened to reveal after his firing.

While all this drama was playing out in the public eye, an equally compelling corporate drama was playing out as well. Last year, CNN’s parent company Warner Media announced a merger with the Discovery Channel, whose CEO David Zaslav would be in charge of the combined company. Not only has Zaslav forced out Zucker and his sensationalized brand of news coverage, but he has made it clear that he wants to see CNN return to its original non-partisan grounding. Influential investors have also indicated that is their preferred course as well, and it’s beginning to look like the network is preparing for a major shift.

Then in the middle of all this upheaval, a war breaks out in Eastern Europe. Just as CNN used the worldwide attention on the Gulf War more than thirty years ago to originally establish its dominant standing as a reliable news source, it now appears that the violence in Ukraine is providing the network with a similar opportunity. Zaslav has lavished praise on his news team for their coverage of this seminal story, and it’s easy to see how he may use this as a pivot point to refocus CNN’s brand back to where it started – and to where it belongs.

CNN was never going to be more than a second-best partisan platform to Fox, and would always be outflanked on the left by MSNBC. Here’s hoping that a viewing public that has been sobered by the realities of wartime will turn back to this newly-serious platform and reward it with an enlarged audience that will allow CNN to continue in this vein going forward.

Want to talk about this topic more? Join Dan for his webinar “Politics In The Time of Coronavirus.” Or read more of Dan’s writing at: www.danschnurpolitics.com.