The Senate passed a bipartisan gun safety package late Thursday night after voting to break a filibuster earlier in the day.

The legislation, known as the Bipartisan Safer Communities Act, passed 65-33, with 15 Republicans joining all 50 Democrats. A bipartisan group, led by Sens. John Cornyn (R-TX) and Chris Murphy (R-CT), first took up talks on new gun laws after recent mass shootings in Uvalde, Texas, Buffalo N.Y. and elsewhere. The bill seeks to strengthen background checks, enforce punishments for straw purchases, incentivize red flag laws and more. It would provide roughly $15 billion in funding if it becomes law, more than half of which would go toward mental health programs and school safety.

The measure now heads to the House, where is expected to pass before Congress breaks for Fourth of July despite some House GOP opposition. Polls from the left and right indicate widespread support for background checks and other measures in the bill.

The news was a top story from sources across the political spectrum. Voices on the left and center, such as Washington Post writer Paul Waldman (Left bias), often praised the bill as the biggest gun laws breakthrough in decades, and focused especially on its efforts to strengthen background checks. Some voices on the right, such as National Review's (Right bias) Editorial Board, said the bill was "ill-considered" and argued that many of its measures "are either the proper preserve of the states or provided for already within existing federal law." 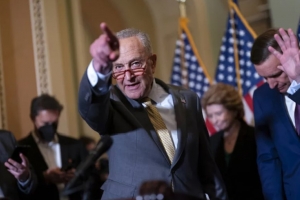 The Senate passed a bipartisan gun reform bill on Thursday in the wake of a slew of mass shootings in recent months, including the death of 19 children and two teachers in Uvalde, Texas in late May.

The Bipartisan Safer Communities Act — negotiated by a group of senators led by Sens. John Cornyn (R-TX) and Chris Murphy (R-CT) — looks to incentivize states to implement red flag laws. The proposal would make it easier for law enforcement to confiscate a firearm and block the purchase of a gun if an individual is deemed... 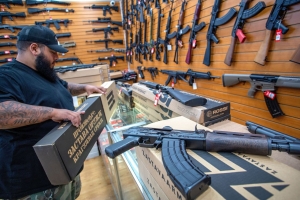 The Senate passed the most sweeping firearms legislation in decades, with a coalition of more than a dozen Republicans joining Democrats to provide new tools to deter mass shootings following deadly attacks around the nation.

The 65-33 vote capped a month of negotiations, led by Sens. Chris Murphy (D., Conn.) and John Cornyn (R., Texas), who were tasked by the leaders of their respective parties with finding a compromise on one of the most contentious topics in American politics.

The legislation, which provides roughly $15 billion in funding, would help states put...

Read full story
Some content from this outlet may be limited or behind a paywall.
See full media bias rating for Wall Street Journal (News)
From the Left
1046
Gun Control and Gun Rights
Senate passes most sweeping gun bill in decades, setting up House vote
NBC News (Online) 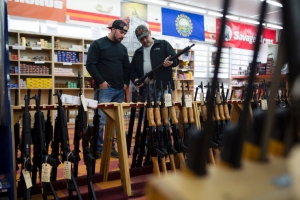 The Senate on Thursday night passed the most sweeping gun bill in decades designed to prevent gun violence, a major victory for advocates and a rare defeat for the National Rifle Association.

The vote was 65 to 33, with all 50 Democratic members and 15 Republicans, including Minority Leader Mitch McConnell, voting to send the bill to the House.

“The United States Senate is doing something many believed was impossible even a few weeks ago. We are passing the first significant gun safety bill in nearly 30 years,” Senate Majority Leader Chuck Schumer,...