Houston Rockets' General Manager Daryl Morey of the National Basketball Association (NBA) quickly deleted a tweet showing his support for the Hong Kong protesters. The tweet and subsequent deletion angered virtually everyone; with Chinese nationals expressing anger and condemnation of the Houston Rockets and the NBA, while supporters of Hong Kong remain appalled at Morey's retraction. Morey then issued an apology to Chinese NBA fans and sponsors.

The media has reported similarly with the exception of some left-leaning outlets, who castigated Morey's deletion and supposed failure to used his platform for good. Some right-leaning voices were outwardly critical of the NBA's hesitance to call out oppression in China, supposedly to avoid irking the league's Chinese fan base. 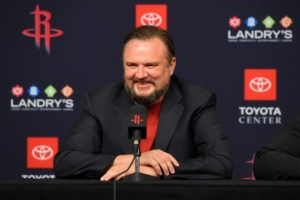 Houston Rockets general manager Daryl Morey tried Sunday to defuse the rapidly growing international fallout over his deleted tweet that showed support for Hong Kong anti-government protesters, saying he did not intend to offend any of the team’s Chinese fans or sponsors.

Morey apologized on Twitter over a now-deleted tweet that spoke in support of the Hong Kong protests, after his remarks were attacked by the Chinese Consulate-General in Houston and the Chinese Basketball Association.

The NBA finds itself caught between two cultures after a tweet about Hong Kong protests sparked criticism from China that threatens the U.S. basketball league’s expansion efforts in its most important international market.

The controversy erupted after Daryl Morey, general manager of the Houston Rockets, one of the most popular U.S. basketball teams in China, appeared to support Hong Kong demonstrators in a tweet late Friday. While the message was deleted and both Morey and the National Basketball Association tried to distance themselves from it, the damage reverberated across both...

Houston Rockets General Manager Daryl Morey tried Sunday to defuse the rapidly growing fallout over his deleted tweet that showed support for Hong Kong anti-government protesters, saying he did not intend to offend any of the team's Chinese fans or sponsors.

A short time after Morey posted that statement, the NBA said it was "regrettable" that the deleted tweet offended many in China. That followed several companies in China, including some of the NBA's major business partners there, lashing out over Morey's original tweet.

Panic and Criticism Spread on Chinese Social Media Over Coronavirus

HONG KONG — While China’s state-run media has urged calm and praised the official response to the coronavirus outbreak, a different story is playing out across...

The trade war with China is over; long live the trade war. That is the message from Donald Trump as the US president promotes a pact with Beijing that has both...

WASHINGTON — In a rare show of bipartisan unity, Republicans and Democrats are planning to try to force President Trump to take a more active stand on human...

Pro-democracy candidates achieved a staggering victory in Hong Kong’s local elections on Sunday — a peaceful but pointed rebuke of pro-Beijing leadership after...

HONG KONG — The shooting of a pro-democracy protester by Hong Kong police unleashed a chain of chaotic events Monday, as thousands of demonstrators clashed...

China revoked the press credentials of three Wall Street Journal reporters based in Beijing, the first time the Chinese government has expelled multiple...

Beijing (AP) — For decades, the Uighur imam was a bedrock of his farming community in China’s far west. On Fridays, he preached Islam as a religion of peace....

Huawei Technologies Co. and two of its U.S. subsidiaries were charged with racketeering conspiracy and conspiracy to steal trade secrets in a federal...

China Sacrifices a Province to Save the World From Coronavirus

Musician Zhang Yaru’s grandmother died on Monday after slipping into a coma. She was repeatedly turned away from the hospital. John Chen, a college graduate...

A Chicago woman who returned from caring for her sick father in China earlier this month has been diagnosed with the respiratory coronavirus that has sickened...

Scientist who simulated the global impact of a coronavirus outbreak says ‘the cat’s already out of...

Scientist and scholar Eric Toner, quoted above in an excerpt from a Friday interview with the business-news channel CNBC, explained that China’s efforts to...

The Centers for Disease Control and Prevention confirmed it is monitoring 63 patients in 22 states for possible instances of the coronavirus, which has spread...

China routinely broke federal law by not disclosing how much it spent to publish regime propaganda in the New York Times, the Washington Post, and other...

China Using DNA To Map Faces; Experts Worry Tech Could Be Used To Further Discrimination Against...

China has been trying to develop technology that can map human faces using a DNA sample. Given the communist nation’s mass detention of Uyghurs and other...

In Hong Kong, It's US vs. China
OPINION

At first glance, it would appear that five months of pro-democracy protests in Hong Kong had produced a stunning triumph. By September, the proposal of city...