As China raises tensions with military drills near Taiwan, the U.S. military is moving to avoid further provocation.

China's military is holding its largest drills relating to Taiwan since 1995 after U.S. House Speaker Nancy Pelosi's (D-Calif.) visited Taiwan last week. On Thursday, the People’s Liberation Army reportedly launched precision missiles into the ocean around Taiwan and simulated a blockade of the island, with exercises by its navy, air force and other departments in six different areas surrounding it. China's government views Taiwan as being under its control; Taiwan's government views it as a sovereign nation.

Meanwhile, the U.S. military confirmed Thursday that it would postpone a previously-scheduled intercontinental ballistic missile (ICBM) test "for a short period of time." White House National Security Council spokesman John Kirby said that "As China engages in destabilizing military exercises around Taiwan, the United States is demonstrating, instead, the behavior of a responsible nuclear power by reducing the risks of miscalculation."

News sources across the political spectrum covered China's military drills and the postponed U.S. missile test. Some voices who opposed Pelosi's Taiwan visit criticized her for purportedly escalating the situation. 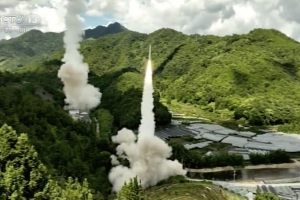 China conducted “precision missile strikes” Thursday in waters off Taiwan’s coasts as part of military exercises that have raised tensions in the region to their highest level in decades following a visit by U.S. House Speaker Nancy Pelosi.

China earlier announced that military exercises by its navy, air force and other departments were underway in six zones surrounding Taiwan, which Beijing claims as its own territory to be annexed by force if necessary.

Five of the missiles fired by China landed in Japan’s Exclusive Economic Zone off Hateruma, an island far south... 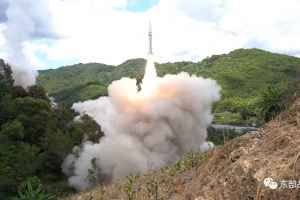 The United States has postponed a scheduled test of an intercontinental ballistic missile (ICBM) to avoid increasing tensions with China as the Asian superpower flexes its military muscle around Taiwan following House Speaker Nancy Pelosi’s visit to the island.

White House National Security Council spokesman John Kirby confirmed Thursday that the test would be delayed for “a short period of time.”

“As China engages in destabilizing military exercises around Taiwan, the United States is demonstrating, instead, the behavior of a responsible nuclear power by reducing the risks of miscalculation,” Kirby told... 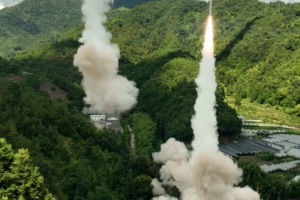 North Korea has for years lobbed missiles into Japan’s waters without great incident. But for an increasingly powerful and aggressive China to do the same — as it did Thursday as a part of military exercises — has sharply raised concerns in political and security circles from Tokyo to Washington.

Beijing’s firing of five missiles into Japanese waters to the east of Taiwan has sent a warning to both the United States and Japan about coming to the aid of Taiwan in the event of a conflict there, analysts said....

‘Echoes of the Cold War’ as Blinken heads to Africa, vying with Russia for influence
CNBC

News
Pelosi and Taiwan
The Flip Side