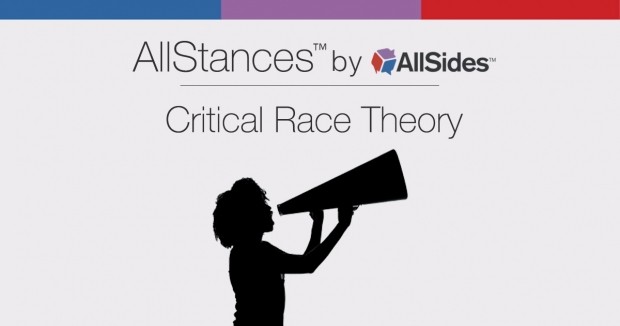 CRT is anti-racist because it encourages us to see race, which can help us to dismantle systems of oppression perpetuated by white hegemony.
See arguments »

By helping us all to understand our place within oppressive power structures, we can come together to create a just and equitable world.
See arguments »

CRT is creating systemic racism in the U.S by promoting a color-conscious application of the law and encouraging us to judge each other by skin color, not character.
See arguments »

Critical race theory (often abbreviated CRT) has sparked controversy in the United States. It is increasingly being applied or taught in institutions such as universities, elementary schools, federal agencies, and corporate HR departments. CRT was banned from being taught in government agencies via an executive order by former President Donald Trump; the EO was then reversed by President Joe Biden.

Before we get to the stances, here’s a brief primer on what critical race theory is.

Critical race theory examines society and culture as they relate to race, law, and power in the U.S. According to Encyclopedia Britannica, CRT is the “view that the law and legal institutions are inherently racist and that race itself, instead of being biologically grounded and natural, is a socially constructed concept that is used by white people to further their economic and political interests at the expense of people of colour.” CRT challenges traditional American institutions, such as the American legal and economic system, as well as ideas of individualism and objectivity (defined as a paradigm in which whites are taught to see their perspectives as objective and representative of reality) as being part of “master narratives” that promote the worldviews of white people in positions of power.

CRT is mostly concerned with power — which groups have it and which do not. It distinguishes itself from traditional ideas of civil rights, such as color-blind, equal treatment and removing significance from racial identity categories, arguing that whites are actually favored by civil rights legislation. Critical race theorists instead favor identity politics, in which politics and power are viewed through the lens of the identity groups one belongs to, typically along the lines of race, gender and sexual orientation, and advocate for groups to be treated differently according to their needs. It favors equity over equality in public policy, claiming racial equality leads people, especially people of color, to accept the status quo and their systemic oppression. Critical race theorists define equality as providing the same level of opportunity and assistance to all segments of society; equity is providing various levels of support and assistance depending on specific needs or abilities.

CRT also promotes concepts like whiteness, intersectionality and microaggressions. Whiteness refers to the supposed way that white people, their customs, culture, and beliefs operate as the standard by which all other groups are compared. Intersectionality seeks to explain how different facets of identity like race and gender can intersect with one another to add layers of advantage or disadvantage. Microaggressions are defined as subtle insults directed toward people of color either consciously or unconsciously. Critical race theorists argue that systemic racism manifests in things like housing, bank lending, labor practices and access to education.

CRT was developed in the 1970s by a group of legal scholars and activists who developed the theory by building on the work of movements like critical legal theory and radical feminism.

CRT is necessary to defeat racism because it encourages us to see race, which can help us to dismantle systems of oppression perpetuated by white hegemony; it is anti-racist.

By helping us all to understand our place within oppressive power structures, CRT helps us come together to create a just and equitable world.

Putting us into categories of oppressed and oppressor only divides us against one another.

CRT is creating systemic racism in the U.S. by promoting a color-conscious application of the law and encouraging us to judge each other by the color of our skin, not the content of our character.

Continue the Conversation on Kialo