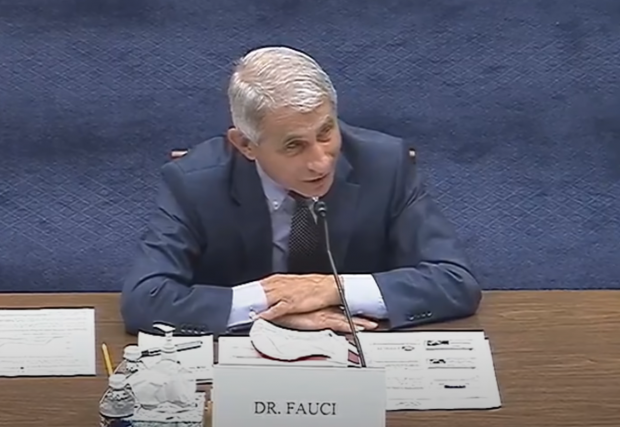 Dr. Anthony Fauci, the leading epidemiologist for the White House coronavirus task force, testified before the House Select Committee on the Coronavirus Crisis last week. During the hearing, Fauci exchanged words with Congressman Jim Jordan (R-OH) after Jordan asked about limits on protesting as possible means to control the coronavirus. Fauci maintained that he could not answer that question.

But people who only read one side of the news might have entirely separate impressions of how the confrontation went.

AllSides analysis found that right-rated media were more likely to paint Fauci as the loser of this exchange. For instance, the Washington Examiner’s coverage included only negative reactions towards Fauci, such as tweets from Meghan McCain. TheBlaze described Fauci as “visibly perturbed,” something few other outlets observed, if any. The Daily Caller focused its report on Jordan’s questioning of Fauci regarding violence in Chicago, in an apparent attempt to disparage protesters. Coverage from these sources and others, including the New York Post and Daily Wire, said that Jordan “grilled” Fauci. An opinion from the Washington Times described the questioning as Jordan “hammering” Fauci.

Center-rated outlets were more likely to describe the testimony in neutral terms, though some did frame Fauci as being on the favorable side of the exchange. The Hill used the word “presses"; Business Insider said that the two “clashed”. Real Clear Politics ran the headline, “Jim Jordan to Fauci: Did Nationwide Protests Help Spread Coronavirus?” The Week mentioned that Jordan failed in his attempts to elicit specific information from Fauci. Reuters also followed this trend, framing the confrontation as Fauci resisting a “Republican effort to turn testimony against protesters.”

On the other side of the aisle, left-rated outlets painted Jordan as incompetent. AlterNet suggested that Fauci laughed at Jordan’s questions. CNN merely called the exchange “heated”. Yahoo News described the exchange as “tense”. An analysis piece published by Mother Jones referred to Jordan’s line of questioning as “ranting”. Refinery29 pushed the idea that Jordan wanted to get a public health basis for banning protests that he politically disagrees with. Mediaite framed the issue as Fauci pushing back on Jordan’s questions. The New York Times framed the story as Jordan “tr[ying] to press Fauci”.

Some outlets resisted partisan conformity. One America News Network used rather neutral language when compared to coverage from its right-rated peers, running the headline, “Rep. Jordan Questions Fauci On How Protests Are Contributing To Pandemic.” BBC News, on the other hand, used similar language to its right-rated counterparts, saying Fauci was “grilled,” despite being a center-rated outlet.

These examples fit one of AllSides’ types of media bias: bias by spin. Spin is using loaded wording in order to suggest something stronger than what is actually happening. Often, ambiguous language is used that cannot be objectively supported. Can we empirically say that Fauci was “hammered,” “grilled,” or that Jordan was “ranting”? Not really. This is often used as a tool to pull an audience in or have them believe something much stronger than it really occurred.

AllSides points this all out for one reason: many Americans didn’t watch the testimony live. They read about the testimony afterwards, some even from the very sources we cited. This means that many Americans didn’t get the full picture, they just got framing from an outlet. This may include short clips of the interaction and selective quotes to push one side of the story or a specific characterization — both examples of bias by spin. Whether Fauci made Jordan look bad or vice versa should be up to the reader to decide. But the outlets that consciously decided to not use neutral language and direct quotes took that choice away from their consumers.

So the next time you read about a "heated" exchange, "rant," or "spar", consider reading across the spectrum or going directly to the source to watch the exchange for yourself — instead of relying on subjective interpretations from biased journalists.

Hirsh Joshi is a former member of the AllSides news team. He has a Left bias.