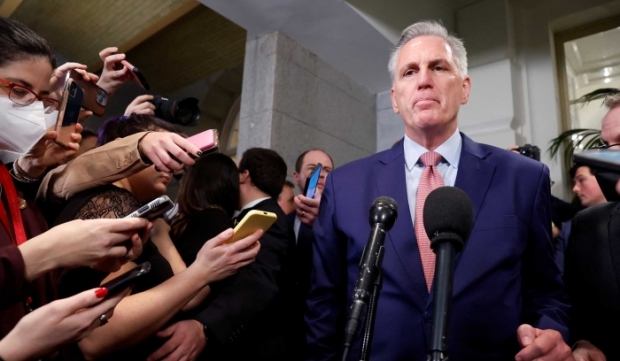 The new Congress convened Tuesday and immediately found itself embroiled in a deadlocked vote for the new House Speaker, with no clear end in sight.

What's Happening: Rep. Kevin McCarthy failed in several votes this week to gain the 218 votes needed to become House Speaker. Twenty Republicans held out against him, arguing that he represents an unproductive status quo. The holdouts voted for Rep. Jim Jordan (R-Ohio) on Tuesday in protest, and then voted in protest for Rep. Byron Donalds (R-Fla.) on Wednesday.

Meanwhile, Democratic Rep. Hakeem Jeffries won unanimous support from fellow Democrats, but also failed to reach the 218-vote threshold since he'd require at least six Republican votes. Voting will continue until someone does.

Negotiations are going on behind the scenes to try to get some holdouts to vote for McCarthy. If they don't, some are speculating that House Majority Whip Steve Scalise would be nominated in the end.

What it Means: McCarthy's failure to win 218 initial votes was the first time the majority party failed to quickly elect its leader in 100 years. Republicans' priorities for their new House majority are currently on hold while the speakership is decided, and the House is unable to perform many basic functions.

Sources across the spectrum covered the House Speaker voting as a top story this week. Left- and center-rated sources more often framed it as a sign of debilitating dysfunction among Republicans. Some right-rated sources framed it as a necessary uprising and reboot for the party.

"Kevin McCarthy is so desperate to be speaker, he’s ready to gut his own power just to get the job. The California Republican unveiled major concessions on Wednesday evening after he was stung by right-wing radicals who blocked his bid for power in six humiliating votes – a farcical debut for the new GOP-led House."

The real reason the chaos in the House should scare us

"...whoever is going to end up as speaker will be tasked with a seemingly impossible balancing act — maintaining enough conservative support to stay speaker, while preventing a governing disaster. In other words, the speakership chaos could well presage a catastrophic collapse of American governance over the debt ceiling and funding issues this year — or at least a very tense situation until a deal can be worked out."

What can’t the House do without a Speaker?

"One of the biggest hang-ups lawmakers point to is the effect the delay has had on the ceremonial swearing-in of new members. Experts say lawmakers are stuck effectively until the House accepts a Speaker — a delay that is also keeping Congress from installing heads of its various committees."

"Long gone are the days of rank-and-file members pining for money, endorsements or committee assignments from their top leaders. Now, it's the rank-and-file lawmakers — and outside allies juiced by social media — holding the real power."

"McCarthy is facing serious headwinds in his bid to become House speaker, as he hasn't gained a majority of votes in six rounds of voting. Rep. -elect Victoria Spartz, R-Ind., voted for McCarthy previously, but voted 'present' during the fourth, fifth, and sixth round of voting.  In explaining her vote, Spartz said that no Republicans have the votes needed to become House speaker."

What the Speaker Fight Says about the Republican Party

Story Of The Week, US Congress, US House, Kevin McCarthy, Politics