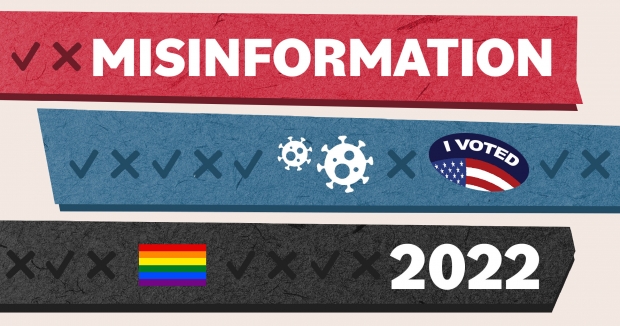 As 2022 comes to a close, AllSides is recapping the most prominent instances of misinformation in national news media, from the left and right and everything in between, over the past year.

From election fraud and COVID-19 lab leak theories to the attack on Paul Pelosi, the year was full of misinformation and misleading narratives fueled by biased media coverage and partisan politics.

Some of the examples that were covered or repeated the most started before this year. They lived on in national coverage, often from multiple sides, with some repeating the initial claim, and others repeating how that claim was false.

Here’s a look at the most impactful examples from the past year. Did we miss any that you think deserve more recognition than we gave here? Send us a note with some details (the more links to the claim and to the response, the better).

A major story across the political spectrum this year was Florida’s Parental Rights in Education bill, championed by Governor Ron DeSantis.

The Parental Rights in Education Act was passed, in DeSantis’s words, to “fight the woke in the legislature…in the schools…in the corporations…Florida is where woke goes to die.”

The law bans classroom instruction on sexual orientation and gender identity before fourth grade. However, it does not explicitly ban the use of the word ‘gay,’ as some concluded after hearing opponents nickname it the ‘Don’t Say Gay’ bill.

The suggestion that discussing LGBTQ+ issues in Florida classrooms is now illegal or outlawed is false.

In October, an incident occurred at the San Francisco residence of Rep. Nancy Pelosi (D-Calif.), where a man broke in and attacked Pelosi’s husband, Paul, with a hammer.

Following the incident, a number of unfounded theories spread regarding the nature of the relationship between Paul Pelosi and the alleged attacker, David DePape.

One article from the Santa Monica Observer (Not Rated) — which the Los Angeles Times (Lean Left bias) said was “known for spreading misinformation” — baselessly stated that the two were lovers. Twitter owner Elon Musk retweeted the Observer’s article, saying, “there is a tiny possibility there might be more to this story than meets the eye.” Several reports on Musk’s retweet omitted the content of the theory, simply referring to it as “an anti-LGBT conspiracy theory.”

DePape’s recent social media history showed that he embraced unfounded theories popular among some on the right regarding COVID-19 and QAnon, but he also had a history of holding left-wing viewpoints on matters like LGBTQ+ issues. The latter fact was ignored by reports from the New York Times (Lean Left bias) and others that concentrated on DePape’s purported right-wing extremism.

While there were a number of contradictions and inconsistencies in the reports following the incident, there is no evidence to support claims that Paul Pelosi and David DePape knew each other prior to DePape breaking into the home. And to avoid fueling misinformation, reporting about DePape’s political beliefs should highlight both his current right-wing views and prior left-wing views.

Former President Donald Trump was not the only political figure alleging election fraud this year.

In Arizona, Kari Lake, a Trump ally, lost her election for governor in November’s midterms. Soon after, Lake began claiming a "botched election" without evidence. Trump echoed this and called for her to be installed as governor of Arizona. Recently, Lake filed a lawsuit to overturn the results of the election.

While Arizona election officials did encounter technical issues with their voting machines, these issues have not been linked to fraud.

This is not the first time Lake cast doubt on election results; she was one of several Republican candidates in 2022 who said she would not have certified the 2020 election. News outlets, mostly on the left, noted this by labeling her an “election denier.” Lake was not alone; other noteworthy candidates who took similar stances in 2022 included Adam Laxalt in Nevada, who said, “I think Trump won in 2020.”

Throughout the year, Trump has reiterated claims that the 2020 election was stolen from him.

Despite the theory sticking around, Trump has not produced any conclusive evidence of widespread voter fraud to substantiate his claims.

There was an unprecedented amount of changes to election laws to account for COVID, but there has been no substantial evidence of outright fraud. Still, polls show that a robust majority of Republicans believe Biden was not legitimately elected in 2020.

When new Democratic House leader Hakeem Jeffries was chosen to succeed outgoing Speaker Nancy Pelosi, claims he made about the 2016 presidential election resurfaced.

In February 2018, Jeffries tweeted that “the more we learn about the 2016 election the more ILLEGITIMATE it becomes. America deserves to know whether we have a FAKE President in the Oval Office,” and implied that Russian interference led to former President Donald Trump’s 2016 victory.

There is no hard evidence of that, though there is evidence that Russia tried to help Trump get elected. But suggesting that Trump was elected illegitimately in 2016 is not based in fact.

Some examples of misinformation burn bright and die out quickly, but others stick around – either due to a lack of evidence proving or disproving the narrative, or the perpetrator of the misinformation continually bringing it back to the spotlight.

Because of this, some of 2021’s most prominent examples of misinformation lingered into 2022.

The contents of Hunter Biden’s laptop have set off multiple federal probes into him and his father, President Joe Biden. But before that, the laptop ignited widespread media censorship following claims from national security experts that it bore similarities to a Russian disinformation campaign.

No evidence of those claims ever surfaced. However, they were a main motivator for Twitter to censor the original news story about the laptop, and for news organizations to report that it was a hoax.

COVID-19’s origins have been the subject of continued debate since the beginning of the pandemic. The idea that the pandemic may have been the result of human actions, especially a science operation connected to a state government, is cause for concern and investigation. This concern resulted in the theory popping back up in 2022, as new voices came out either in support or against the theory.

A study published in The Conversation (Lean Left Bias) in August determined that the lab leak theory was “dead,” but stopped short of determining the virus came from the suspected market, adding a provisional ‘probably’ to the conclusion.

In November, Anthony Fauci, Director of the National Institute of Allergy and Infectious Diseases, stated that he has “a completely open mind about [lab leak theory], despite people saying that I don’t.” Speaking about the Chinese Communist Party, Fauci said, “even when there’s nothing to hide, they act in a suspicious, non-transparent way.”

Meanwhile, Senate Republicans released a report in October stating that "based on the analysis of the publicly available information, it appears reasonable to conclude that the COVID-19 pandemic was, more likely than not, the result of a research-related incident."

Despite new developments, the lab leak theory remains a theory, and the exact origins of COVID-19 remain unknown. Investigations by the U.S. intelligence community have so far been inconclusive. Anyone suggesting that the origins have been confirmed one way or the other could be considered guilty of spreading misinformation.

RELATED: Misinformation Watch: Did COVID-19 Leak From a Chinese Lab?

Isaiah Anthony is an AllSides News Curator. He has a Center bias.